One will find that much of the confusion in the marine industry as to Right Hand / CW, or Left Hand/CCW rotation may have its roots based on the early definitions used by the Detroit Diesel Corporation (from just before WWII) in regards to the way they categorized their engines, AND in the way many in the AUTOMOTIVE Industry talk about engine rotation. Although engine rotation is defined in SAE J 824, let’s just say that because Detroit 2-stroke engines were so popular and universal in their base design, (the WW II standard 6-71 block was 100% symmetrical and could be “mirrored” or flipped around/reversed and the output power could be pulled from either end), Detroit seemed to always use the front end of the engine to describe rotation.

Besides that, general “Automotive Lingo” told us that because you could only “see” the front of your car engine, car buffs would use the front of the engine ( the part that they could actually see turning) to describe engine rotation (Right Hand or CW), although car engines actually met the SAE standard of CCW rotation. Totally different than all other manufacturers of engines, air compressors, hydraulic components, etc., etc., etc.. In otherwords, everyone else views “rotation” by looking at the “business end” or “principal output end” of the engine or other appliance / component to describe “ROTATION” direction. And COUNTER CLOCKWISE / “CCW”, is the standard of the industry from a Briggs & Stratton lawn mower engine (although the flywheel is actually opposite to the output end) to your VW, Lexus, or BMW, and every gasoline or diesel engine in general use today that may be applicable to vessel propulsion.

To sum it up: Whether CCW (standard) or CW (opposite) rotation, it is always defined as the direction of rotation when looking at the flywheel or output end of the engine… See how simple that is!!

As soon as we add a typical transmission behind the engine, the output of the transmission can be either the same or opposite of the engine’s flywheel – Hence a “reverse gear” or reduction gear. But not all reverse gears work the same. Years back, even though the Reverse Gear could change the output direction of the engine’s output rotation (make the boat go backwards), that does not mean it could transmit full power in either direction. Allison, Borg Warner, and many other reverse gears were only capable of transmitting the engine’s full power through one of the TWO sets of internal clutches, and those were called the FORWARD or MAIN CLUTCHES. So, with twin engine boats, opposite rotation engines were developed and the transmission oil pressure system/pump was reversed so it could operate with a CW or RH (non-standard rotation) engine, and use the forward clutch for a left hand prop. That’s why we had an Allison MH 20RH and a MH20LH. That’s why the BW gears have an oil pump on the front that can be rotated 180 degrees for a different input rotation. That’s why on the old Twin Disc MG 512, you could flip over the oil pump and make a transmission work with either input rotation. And that’s why a ZF220A has a different oil pump than a ZF220V – Input rotation of the input shaft and/or oil pump direction is opposite. 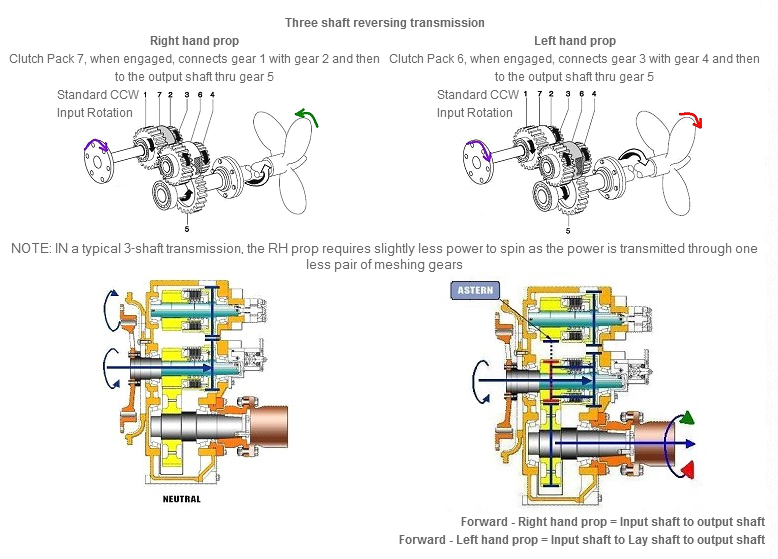 To understand the transmission a tad more, you have to look at it’s basic design what’s going on inside as to the POWER FLOW through the gears. In most cases you are dealing with a 3-shaft drop gear (typical ZF63/63A, ZF 220/220A, Twin Disc 5061/5061A , MG 509, MG 514 , MG5114A, etc. – Down angle or not doesn’t matter as they are still all 3-shaft transmissions, and the power flow through the transmission is all the same – The power comes into the input shaft and it is always turning the same way (it’s connected to the engine flywheel through a torsional coupling) – From there the power either goes directly to the output shaft through 1 pair of meshing gears so now you have the output shaft of the transmission rotating opposite the engine, and with a standard rotation engine (CCW), you would use a RIGHT HAND prop to move the vessel forward, or for reverse output rotation, the power goes from the input shaft to the “lay” or 3rd shaft, and now the output shaft of the transmission is the same as the engine output; hence, you use a LH prop to go forward – REMEMBER, we are always looking from the rear of the engine (or boat) towards the bow or front of the engine when discussing ROTATION, and that applies to props turning inboard or outboard. Just visualize looking through the boat and seeing the engines flywheel (it’s turning CCW in a standard rotation engine).

Now let’s look at a modern coaxial-type gear similar to a MG506, MG 507, or a ZF 301 or ZF 304. Again, down angle or not doesn’t matter, as the power flow through the gear is the same. Coaxial style refers to transmissions when the engine’s crankshaft and transmission output shaft are generally in the same plane with no, or very little, drop or offset between them. In a coaxial-type transmission, you have, what I call, a 4-shaft transmission. The power flow is always from the input to the output shaft but through two or 3 pairs of meshing gears to get either rotation of the output shaft. The transmission has TWO lay shafts, per se, instead of just one.

Now that you have this fixed in your mind, ponder these questions – all based upon engine torquing rotation or how it tends to roll or twist over in the boat under power.

but first a HINT – Remember that the engine will always twist opposite to the load that the crankshaft or output shaft “sees” and that may or may not be the prop!! Let the brain have a little exercise here before you read these. It needs to eat (food for thought) too…