The Raptor was originally built new at our facility about 6 years ago as a custom 36 Ft “New Wave” commercial sea urchin dive boat. When first conceived on the drawing board the owner knew at that time that he’d like to have a single 600 HP machine that would outperform all of his competition but his budget at that time could only allow for this new boat to go together with a 400 hp power train. Well, after 6 great years of performance and making lots of $$, the owner (Ron Rector) decided it was time to turn the Raptor into what it was originally designed for……..One mean machine, The RAPTOR II. 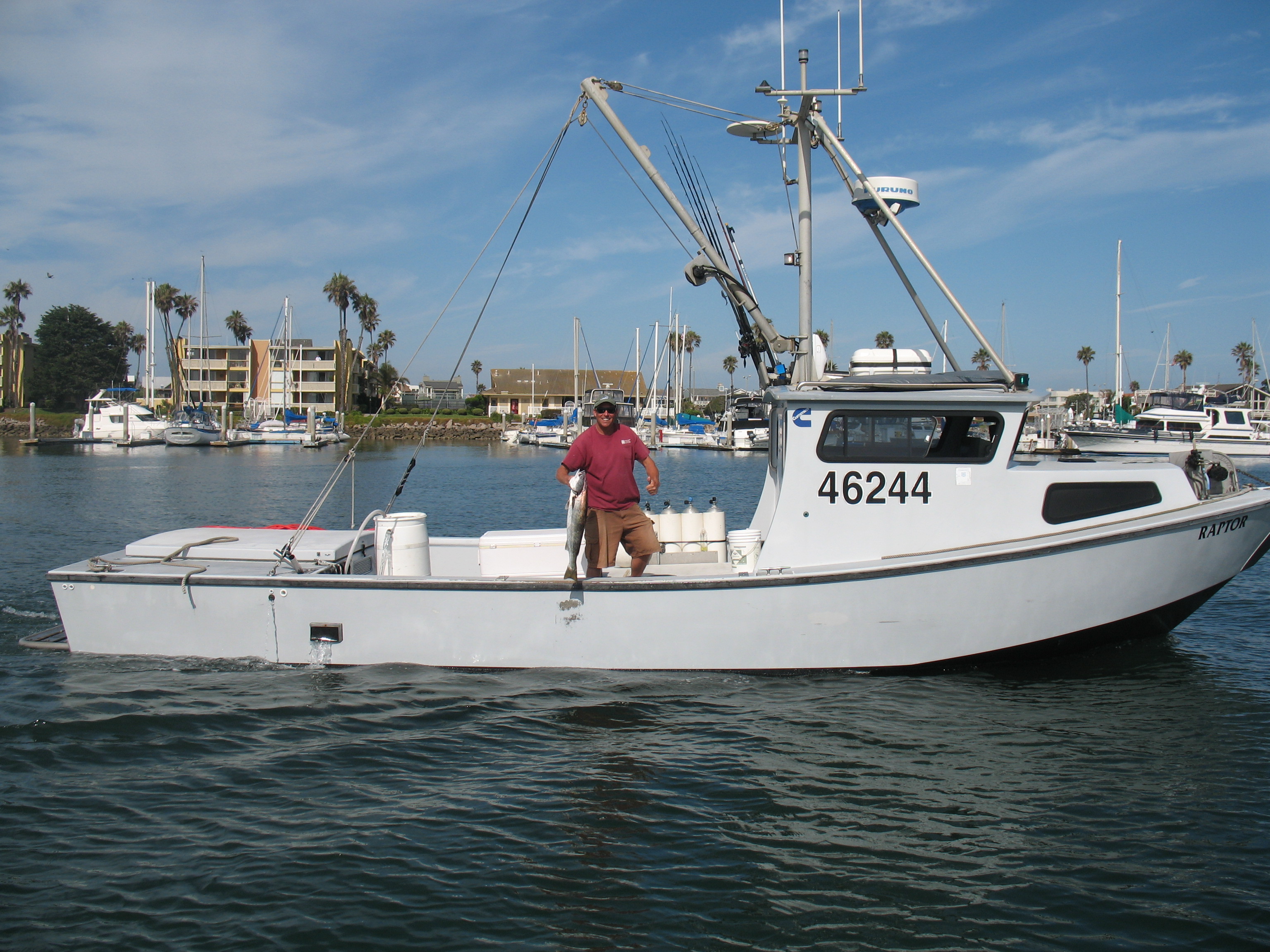 We got together and hit the drawing board to figure out the best way to accomplish this repower, and do it within a budget and time frame that would work for him..We got lucky and found another commercial fisherman that wanted his boat to perform like the Raptor so we were able to sell the entire drive train to the owner of a 32Ft Radon ( ORION ). This helped the budget part, so now all we had to do was do the right engineering by figuring out the best engine/v-drive combo that would allow the optimum fit, power, economy, and most important allow for adaption to all of the hydraulic power requirements of the vessel.. The vessel uses hydraulic power (about 15+ hp) to drive two compressors and two winches. The hydraulic power must come from the main engine and be able to operate at all engine speeds (from a idle to full rpm) and deliver the needed flow rates without being affected by the variable speeds of the main engine.. In this operation, the main engine never shuts down during the course of a normal work day.

It came down to a Cummins QSM-11 rated 635 HP @ 2300 rpm and a ZF 350 remote V-drive optioned w/ a trolling valve and a SAE C pad power take-off (PTO) that would allow us to mount one large pressure compensated (SMART) hydraulic pump..Because the main engine never shuts down, the hydraulic pump is always running as it’s driven off the input shaft to the V- Drive..This makes for a simple but very “commercial” type system that can stand up to the heavy duty use that it will have.

As for overall performance, she’s slighter faster than we hoped for when FULLY loaded w/ 3000+ lbs of product.. And as a added plus, this boat burns exactly the same amount of fuel as it did with the 400C to accomplish the same daily trip to the islands (130+ miles round trip). About 135 gallons for a complete work day of about 11-12 hrs vs the same work day of 14 hours with the 400C.. He just completes the mission 2-3 hrs faster.

The project was simple AFTER the planning was done and was completed about in 3 months and a little over budget. 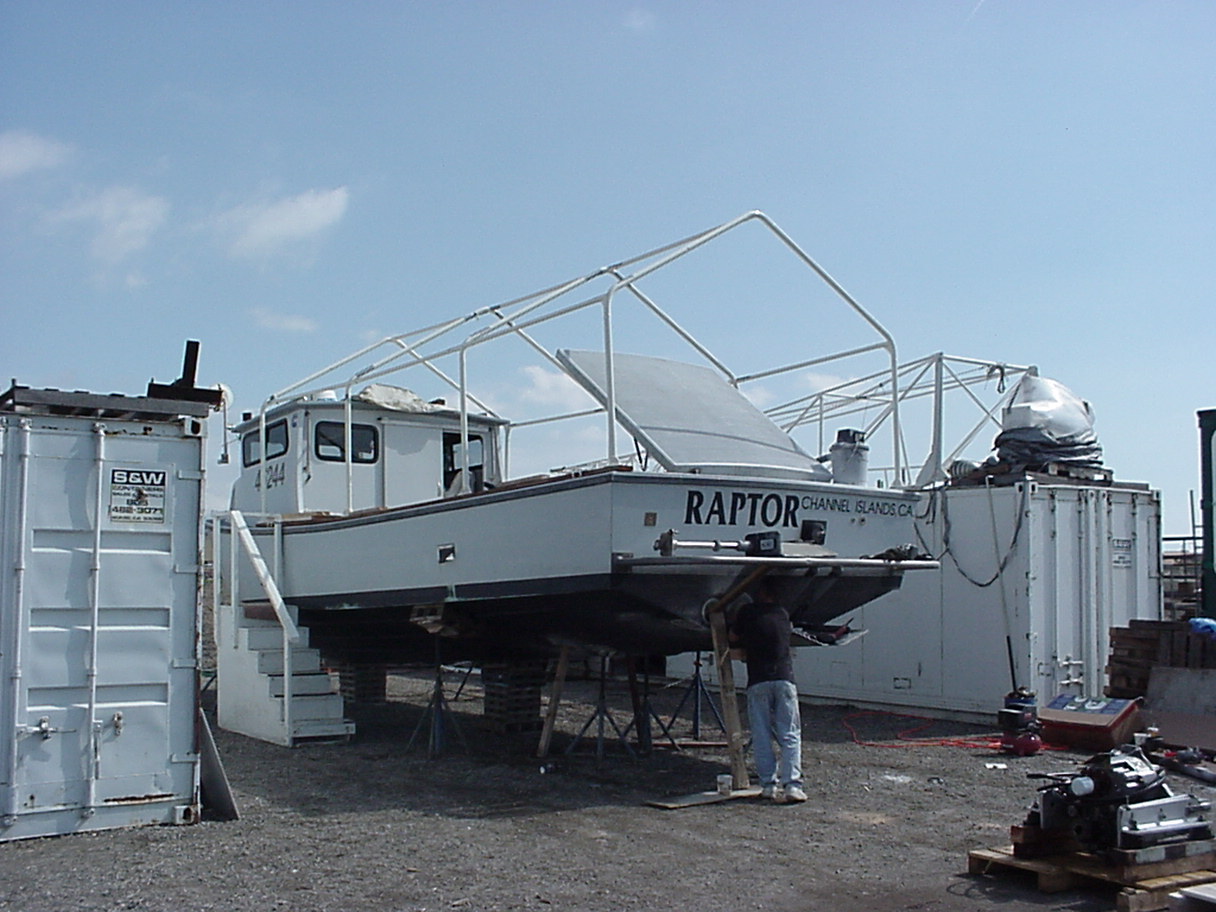 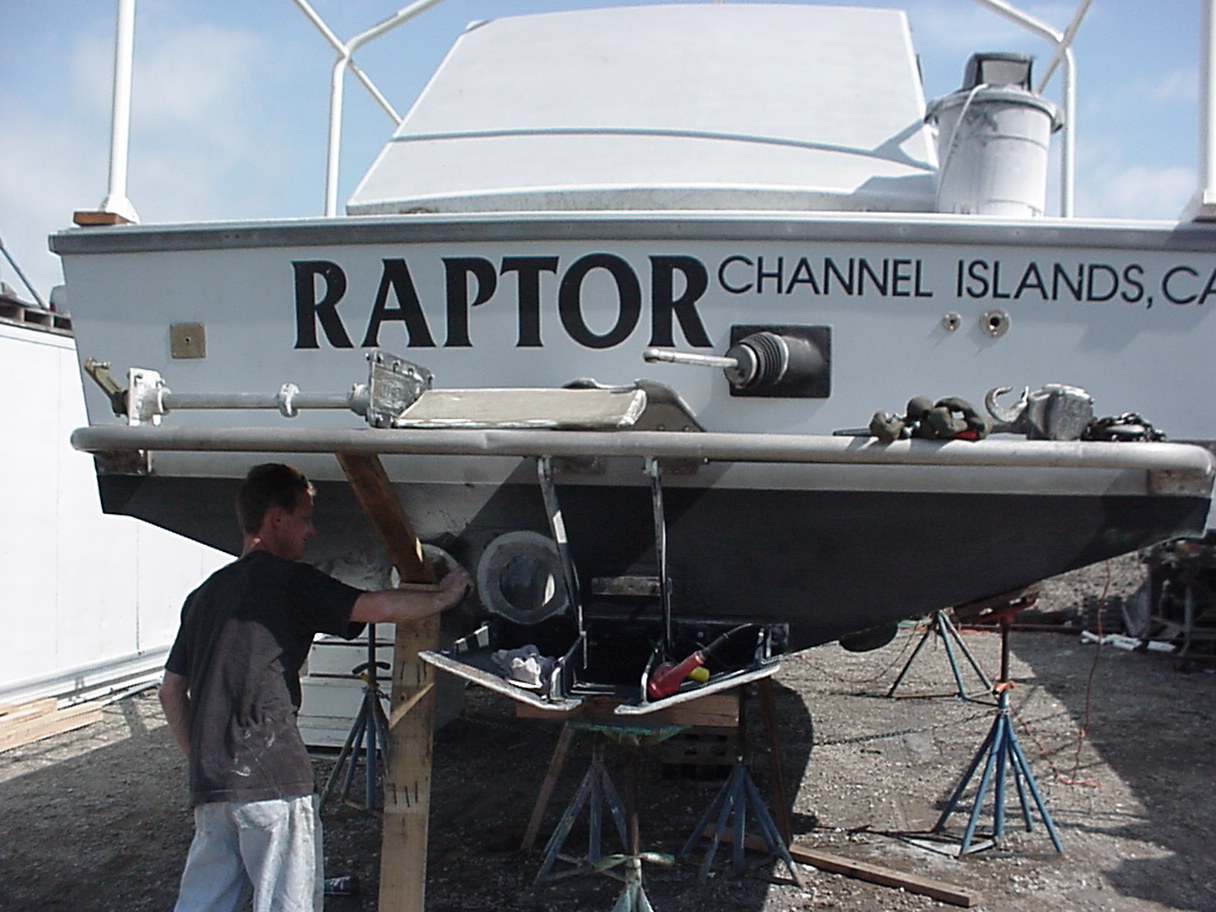 Getting started meant bringing the boat to Seaboard and getting it set up to work in most any kind of weather. The effort it takes to cover a boat for a big project pays for itself may times over. 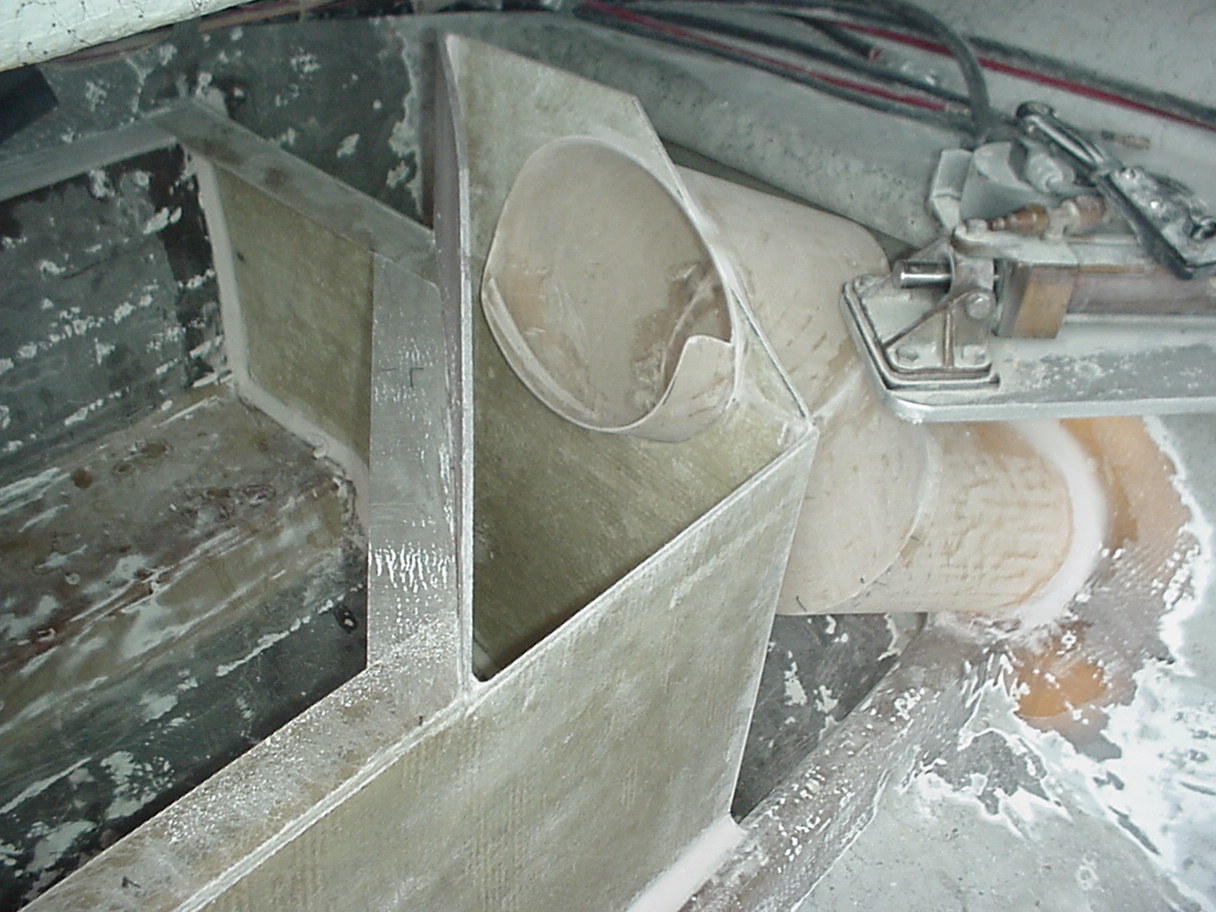 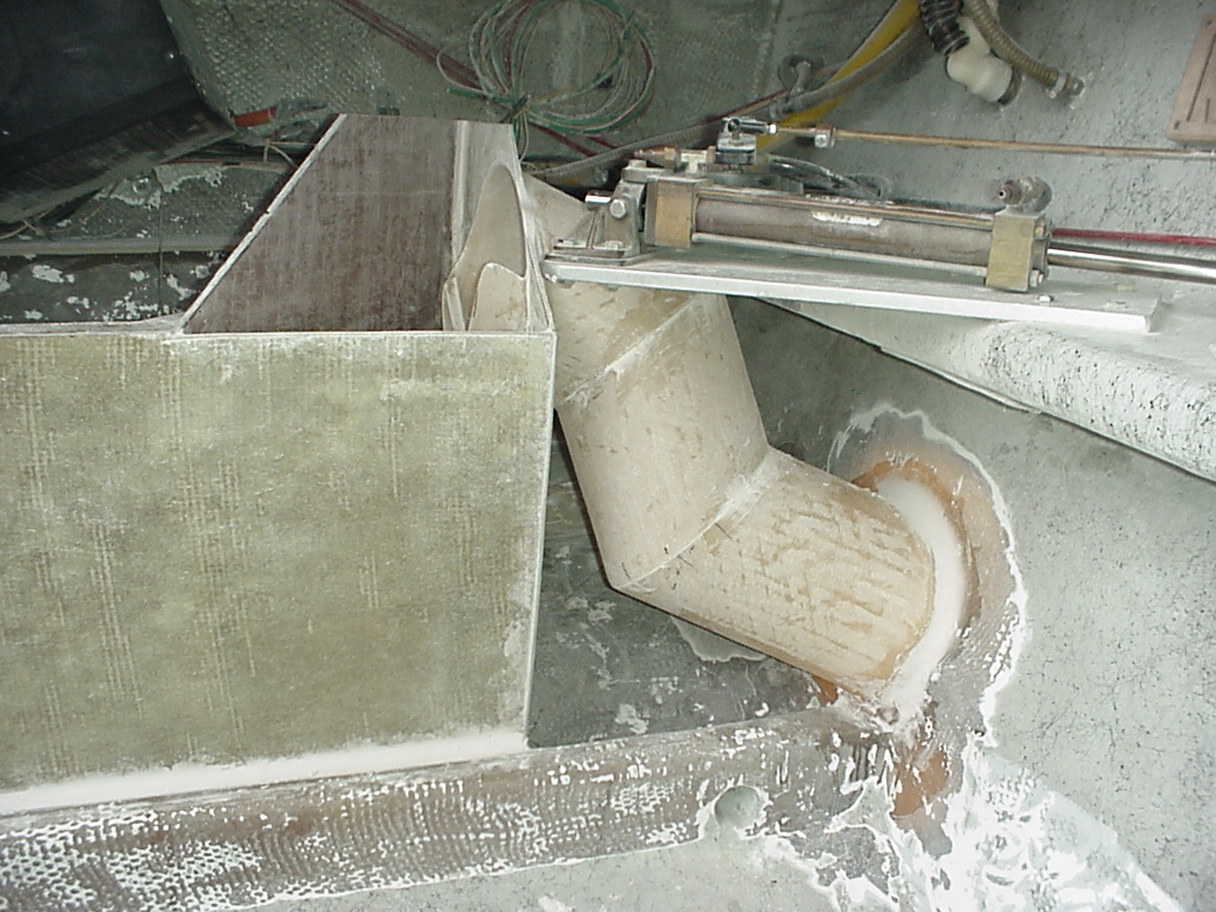 These photos show the construction of the integral lift muffler. Lots of engineering and work equaled a major job. We used a 6″ inlet, and a 8″ outlet. The box was about 7 cu ft with one baffle dividing the inlet from the outlet.
Very quiet and low restriction. 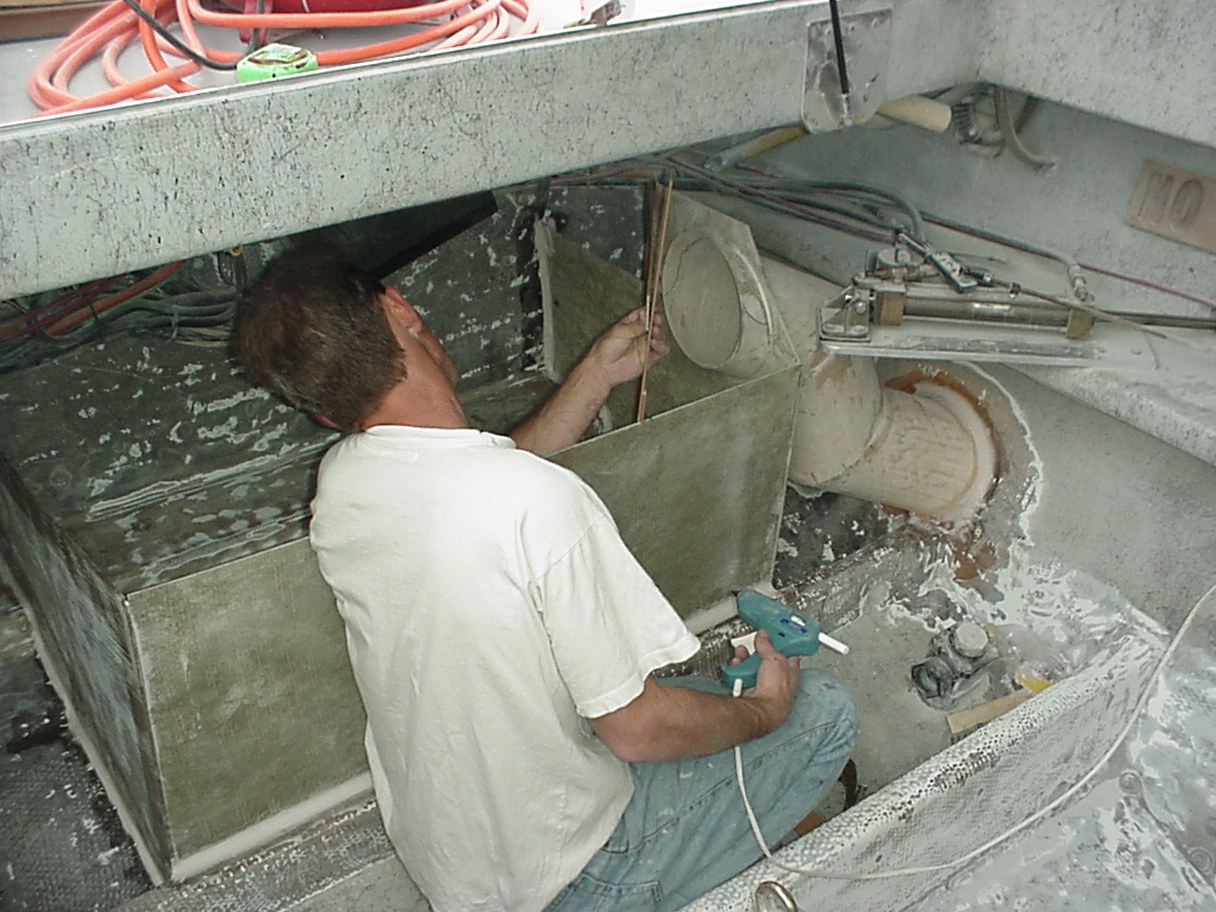 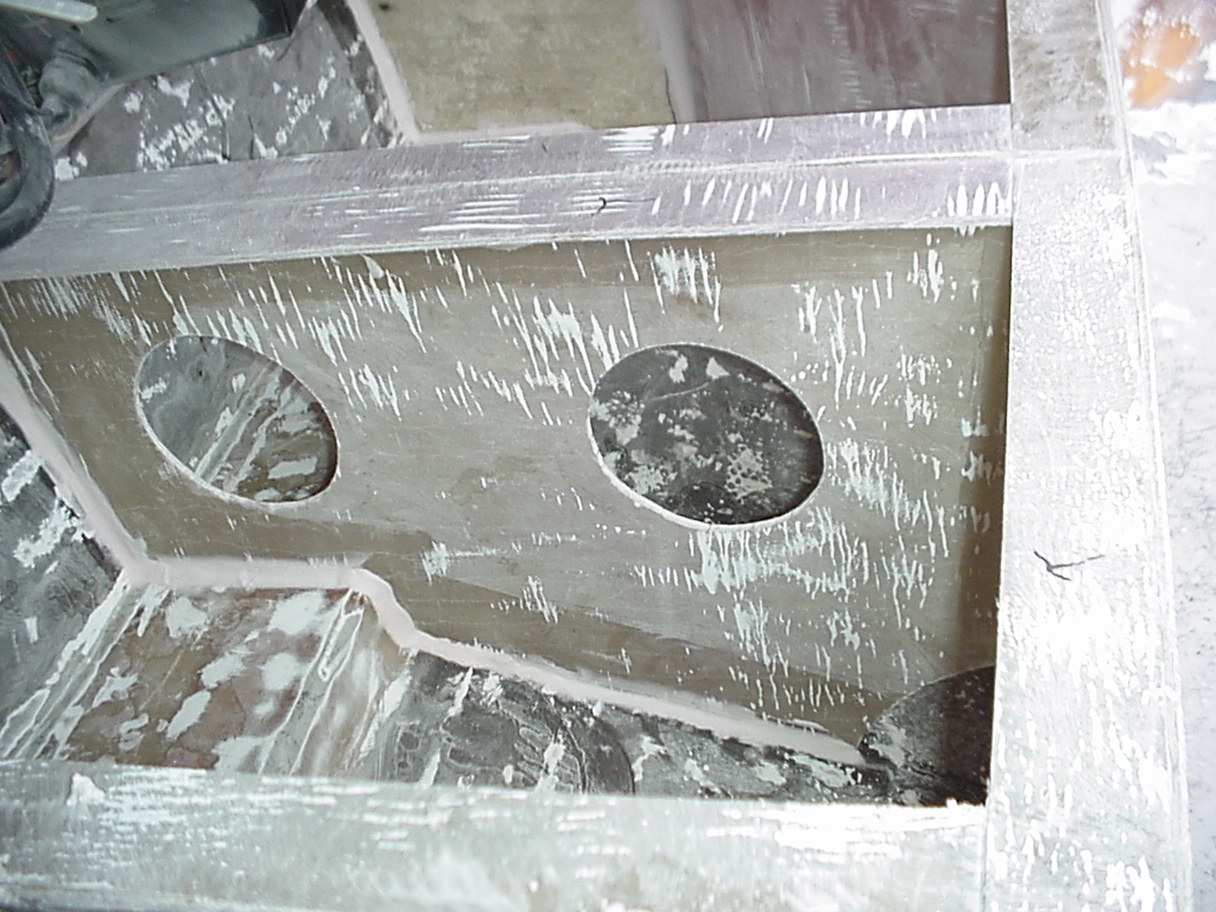 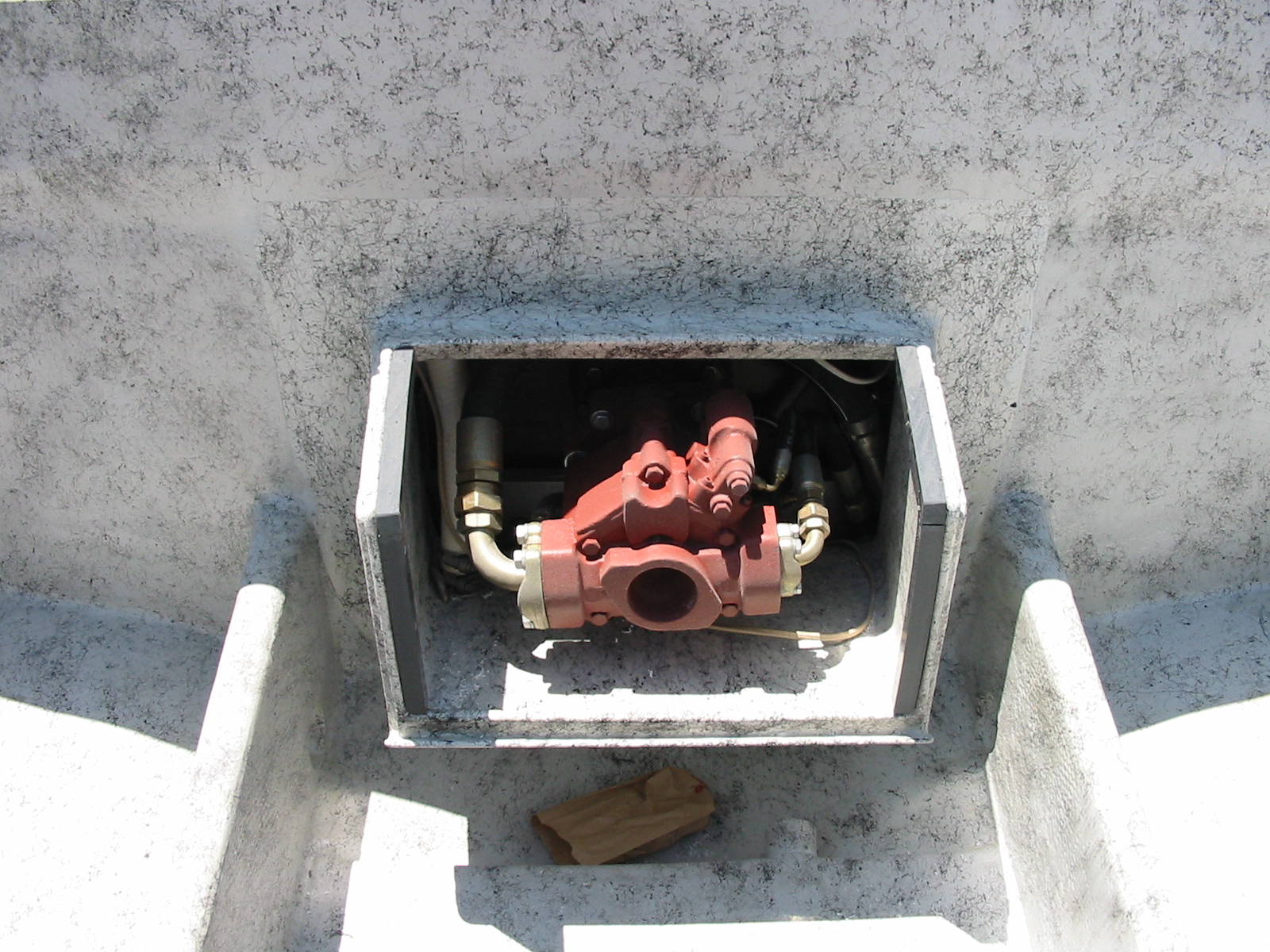 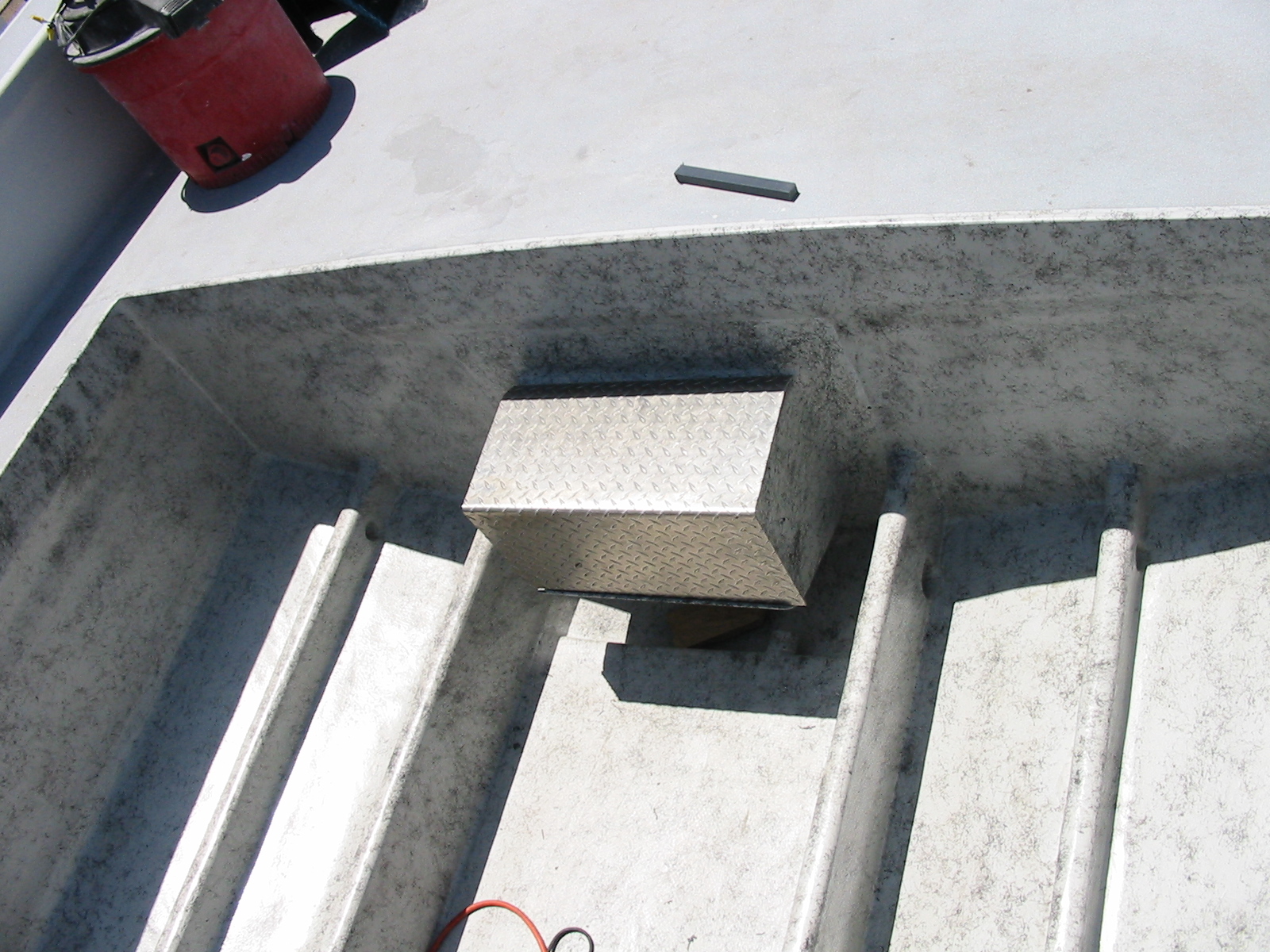 Shows the fish hold side of the bulkhead with the hydraulic pump. A very heavy duty sealed aluminum cover was installed after everything was checked out. 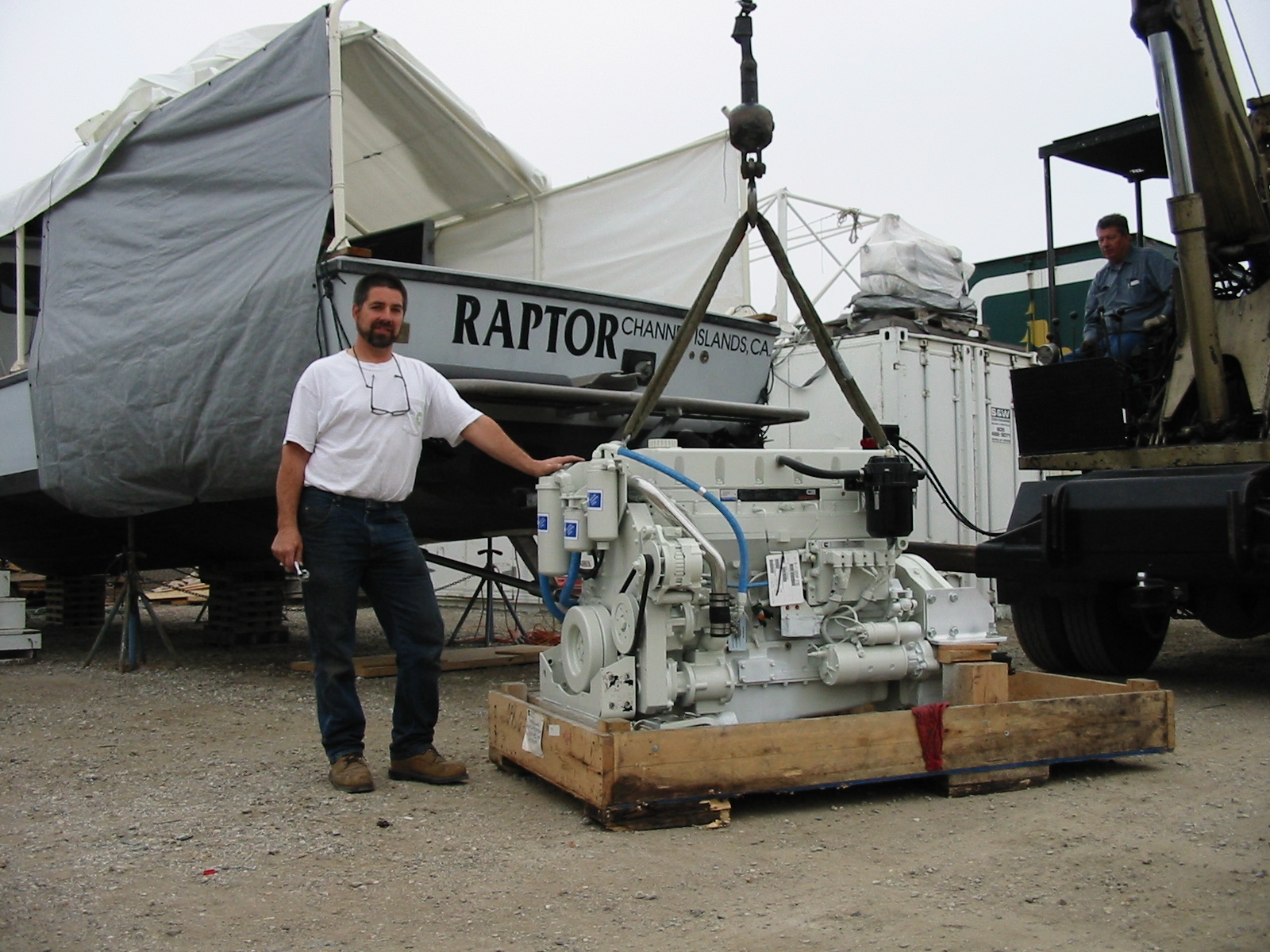 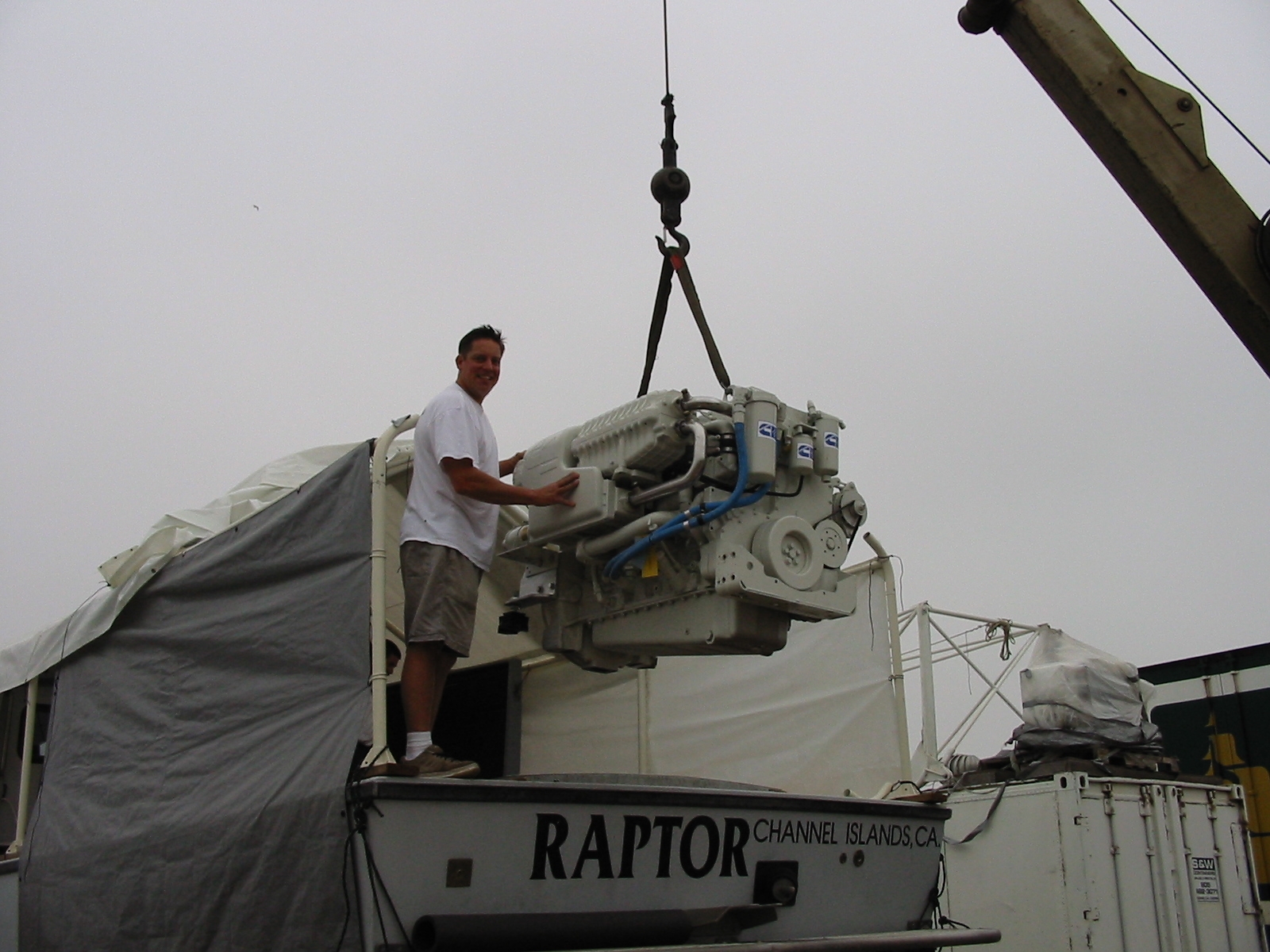 The lift in was a big day as it came after 2 months of very hard work for the owner.. 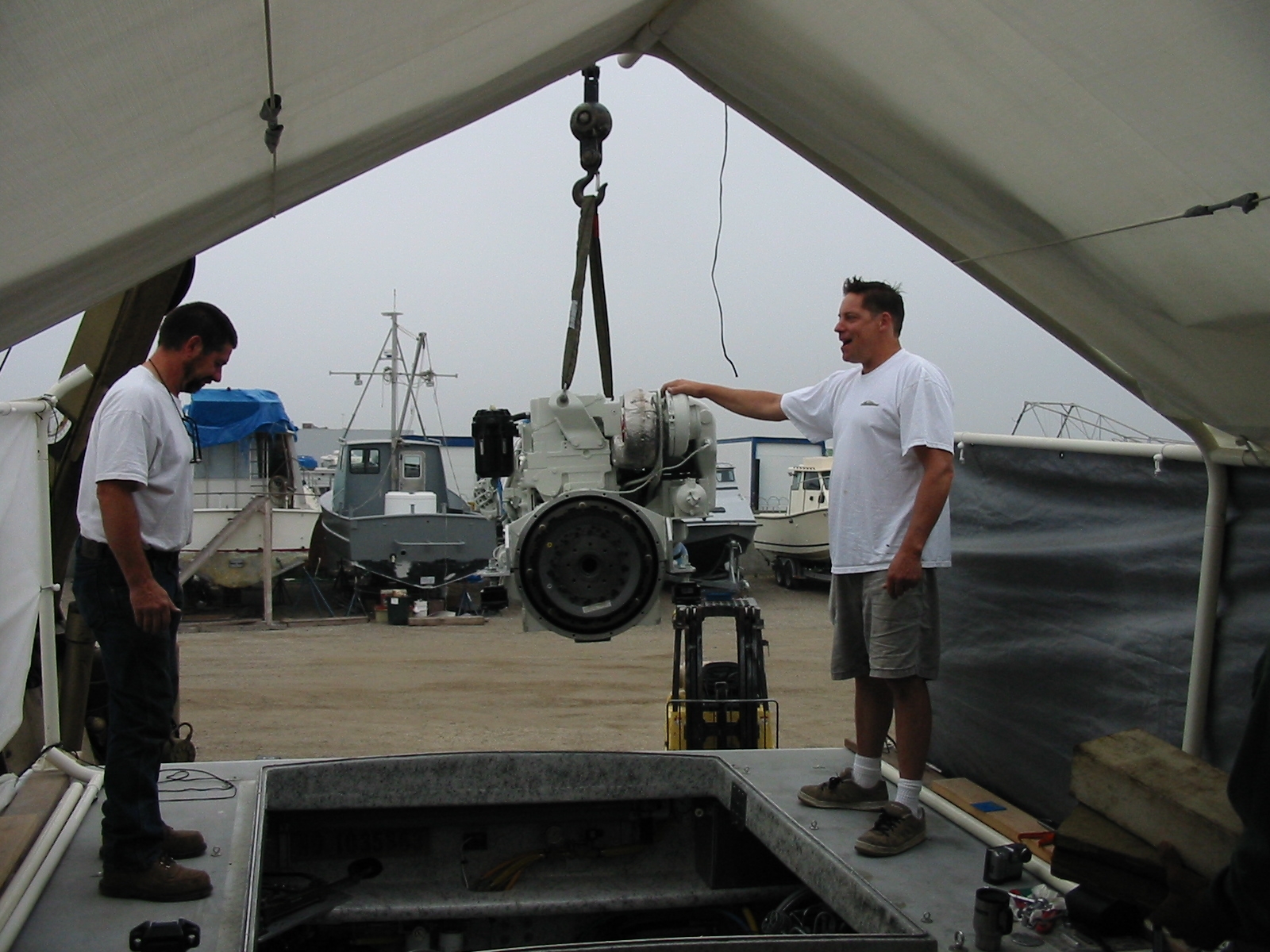 Kind of anti-climatic as it was only a 15 minute process. 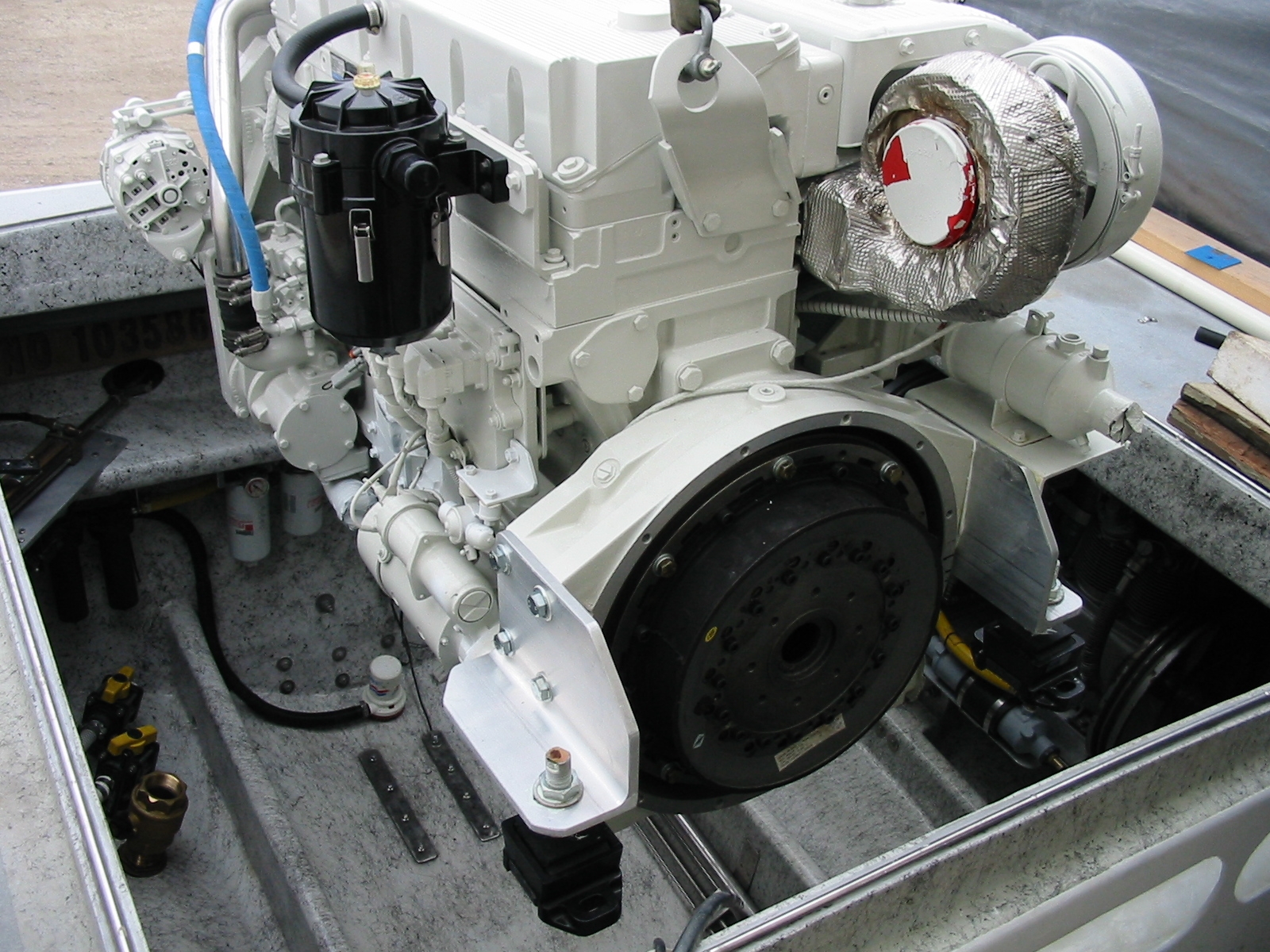 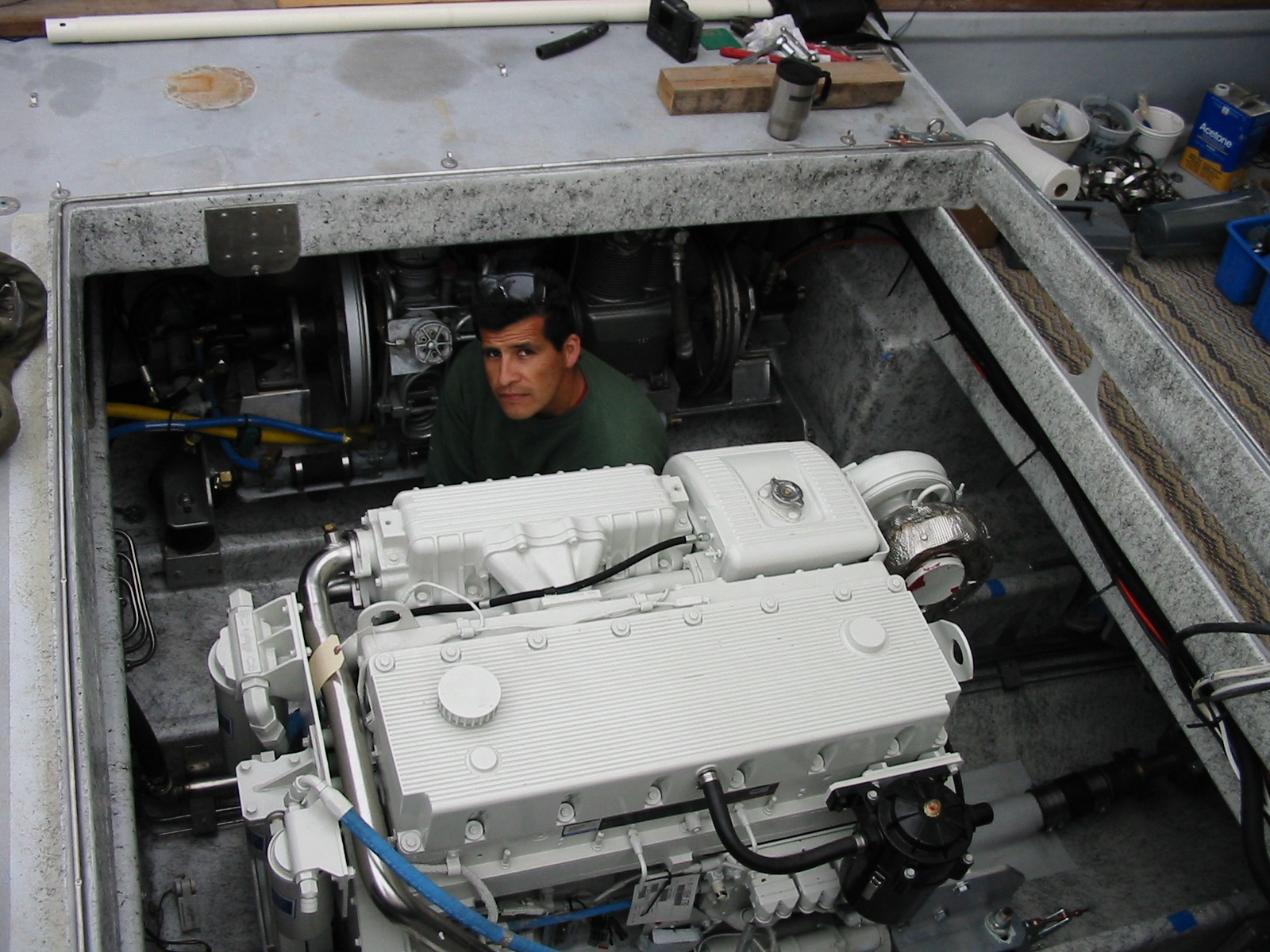 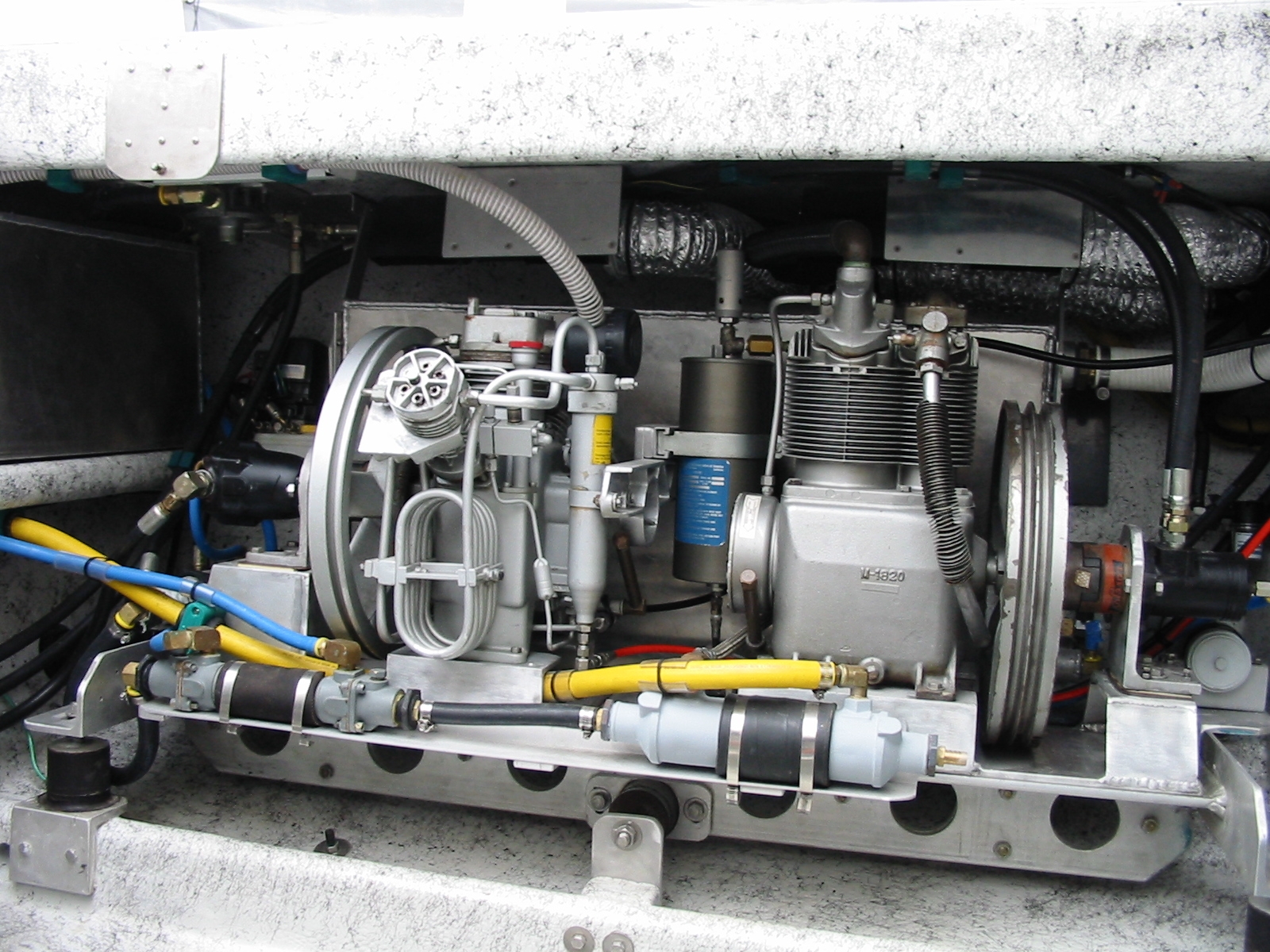 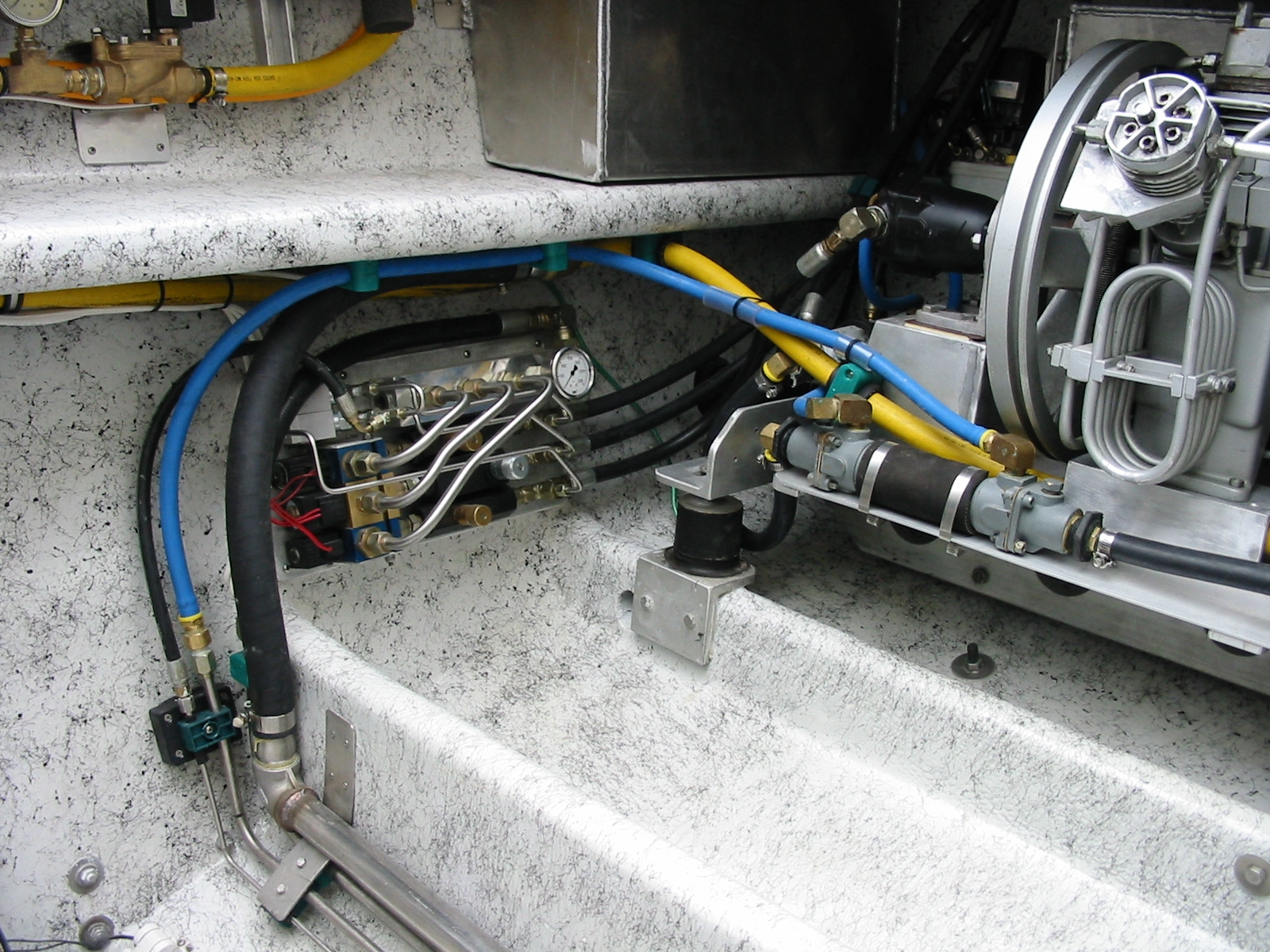 This is a combination hi pressure and low pressure air system that makes “designer” air or NITROX. This system fills an average of 21 scuba bottles each work day with oxygen rich air (about 36% oxygen 14% nitrogen) and is hydraulically driven of the main engine.. Very complex and the cost of this type of system reflects that. 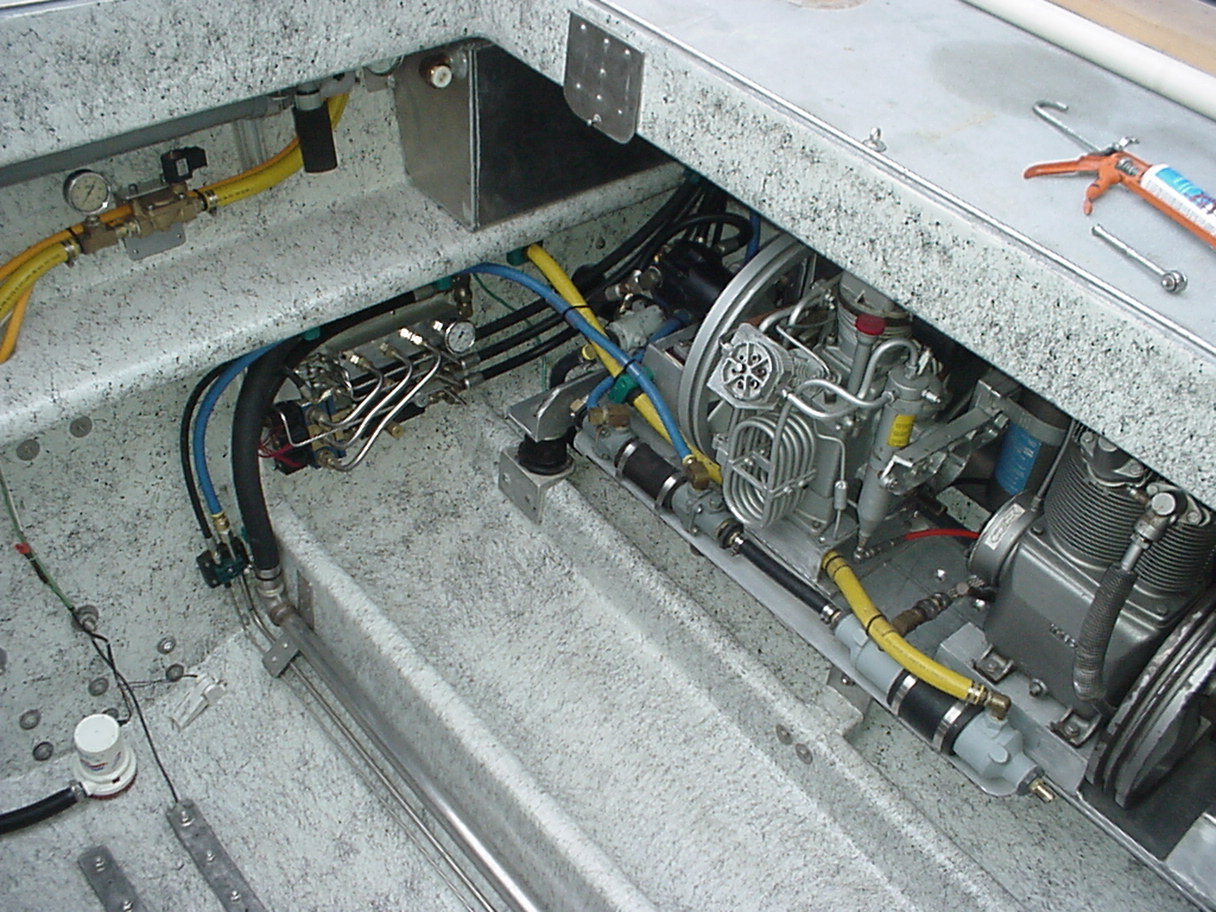 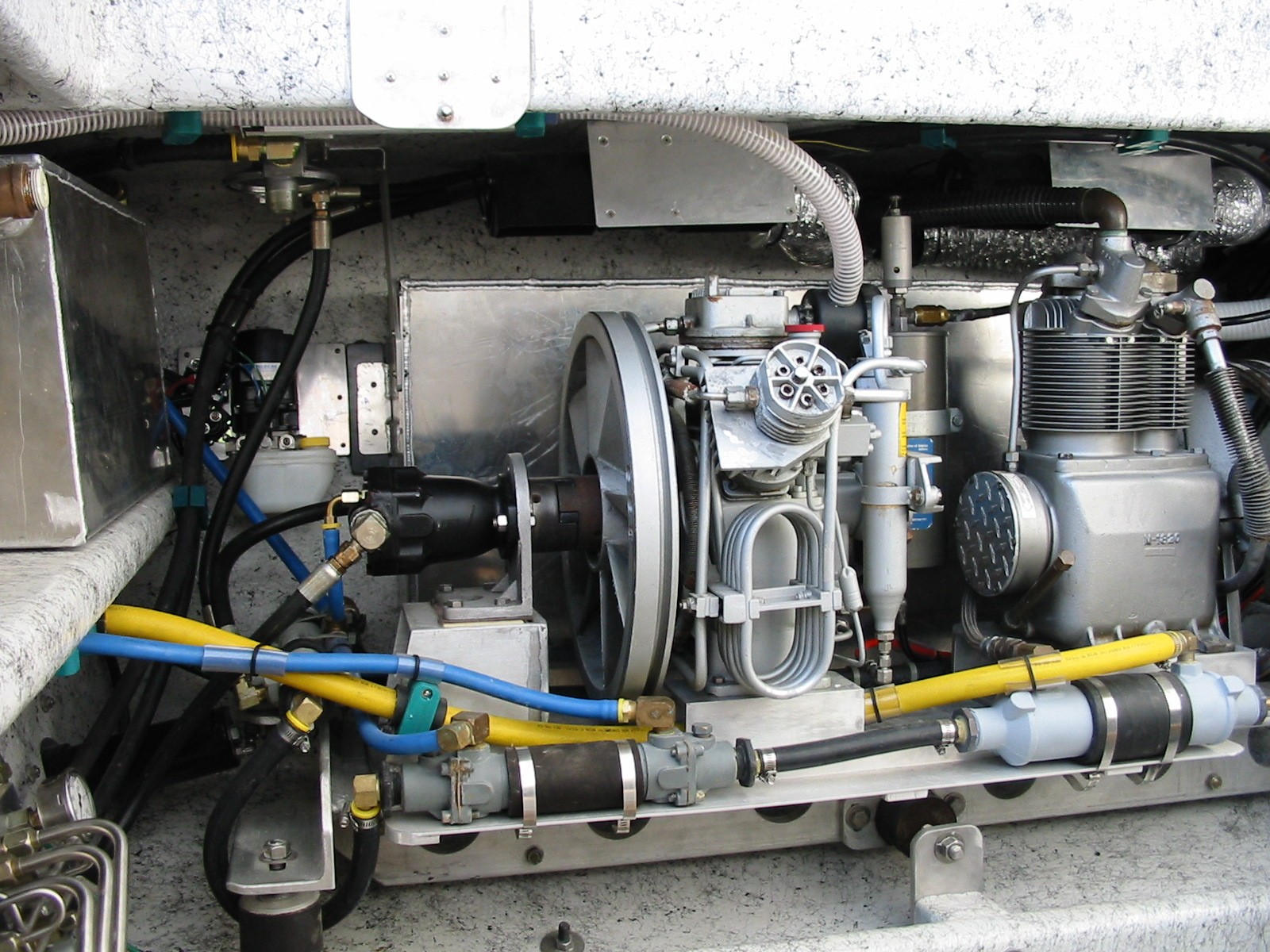 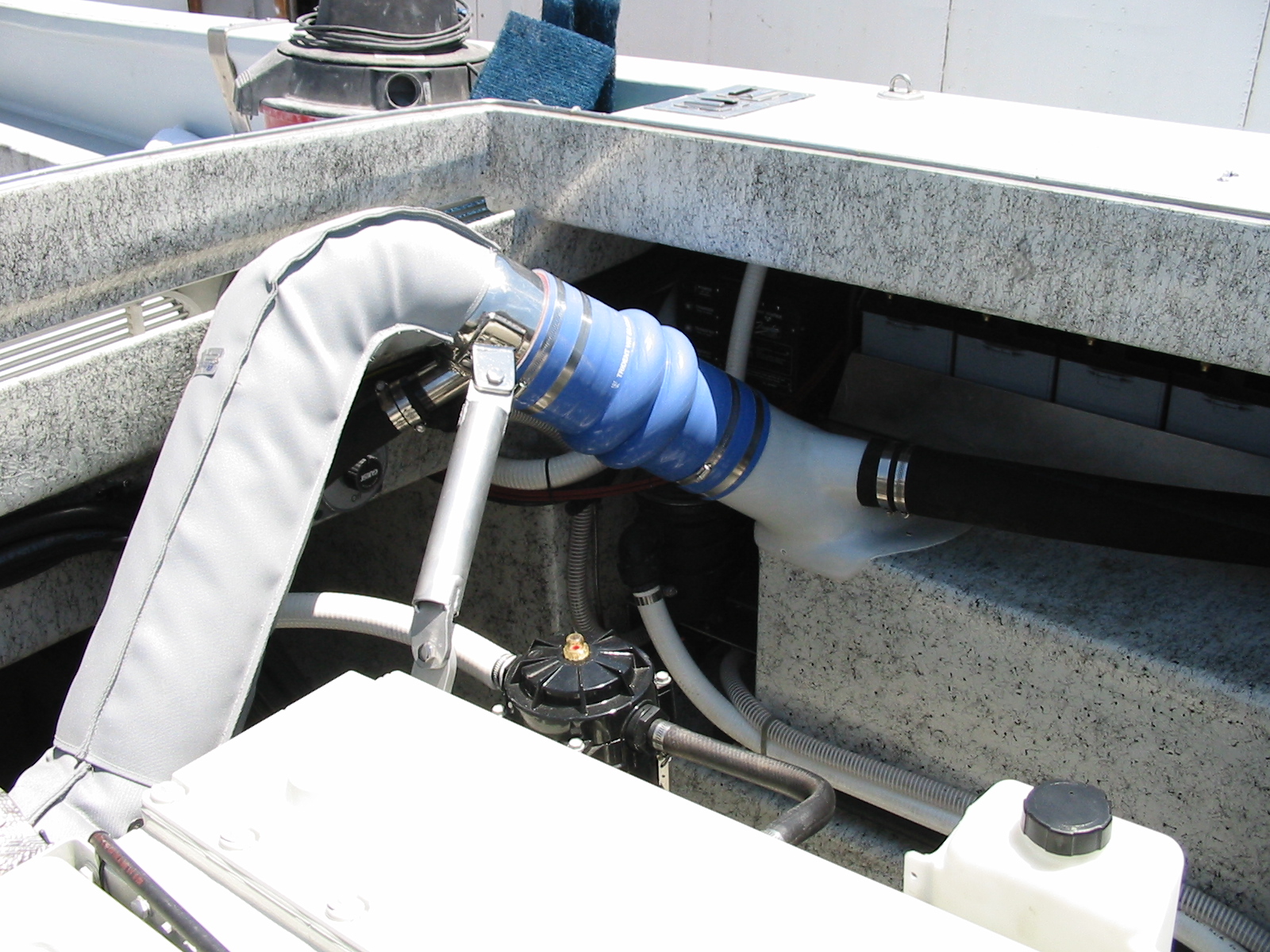 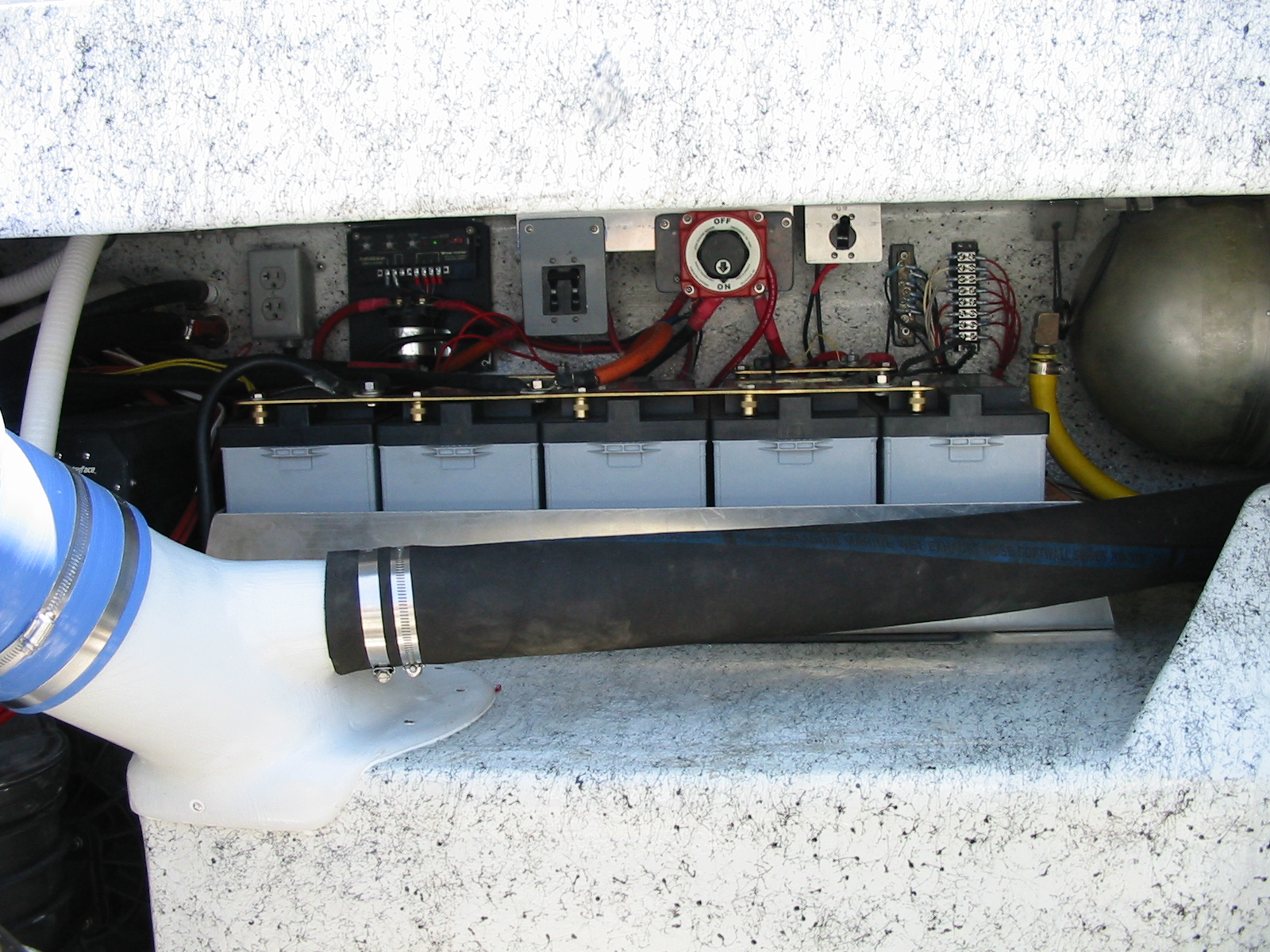 We waited till close to the end of the project to build a custom exhaust riser and tie in into the lift muffler.. We wanted to be sure that its design did not hinder access to any area of the engine room..We used a 2″ bypass for safety incase the lift muffler ever flooded. 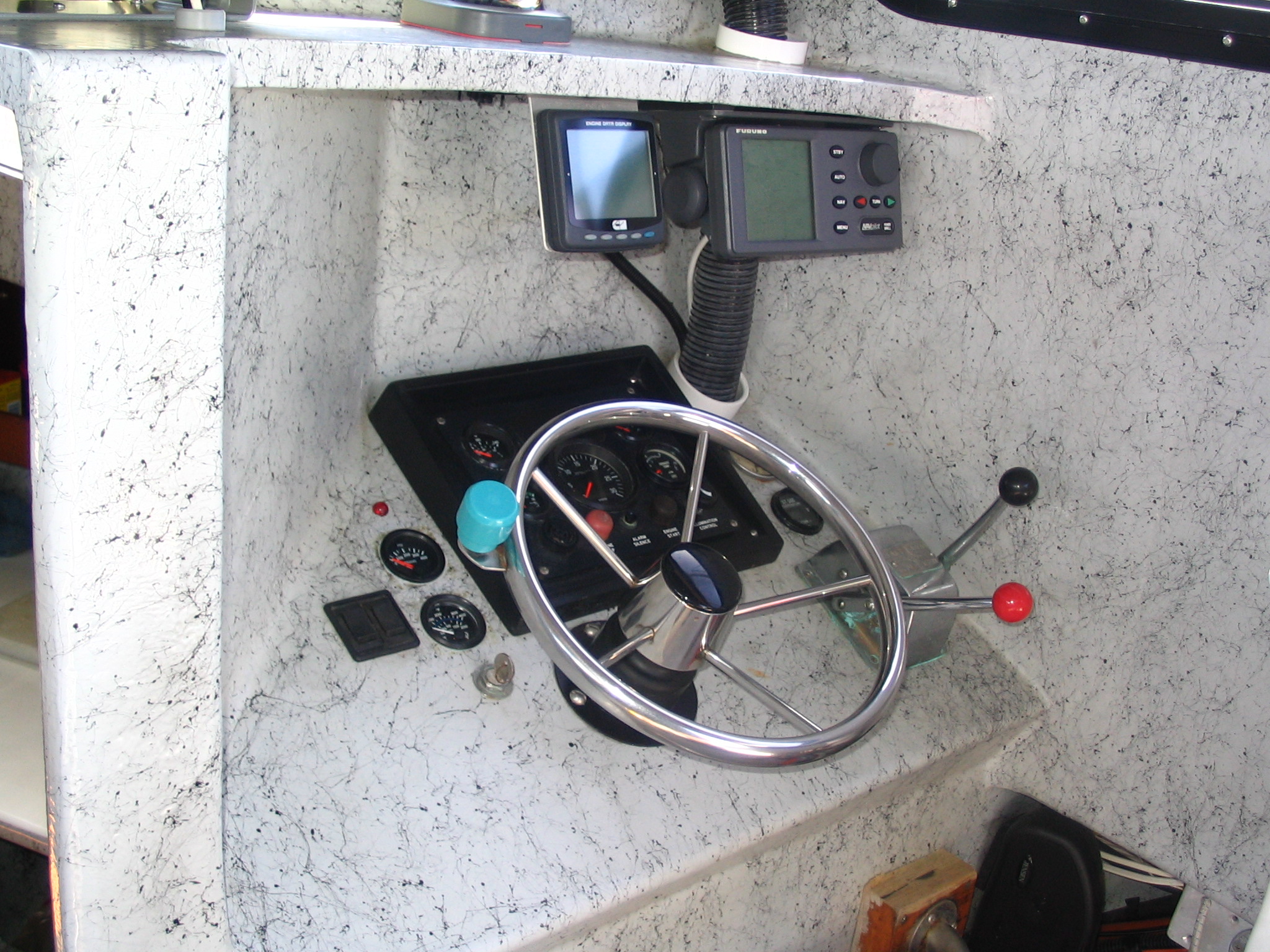 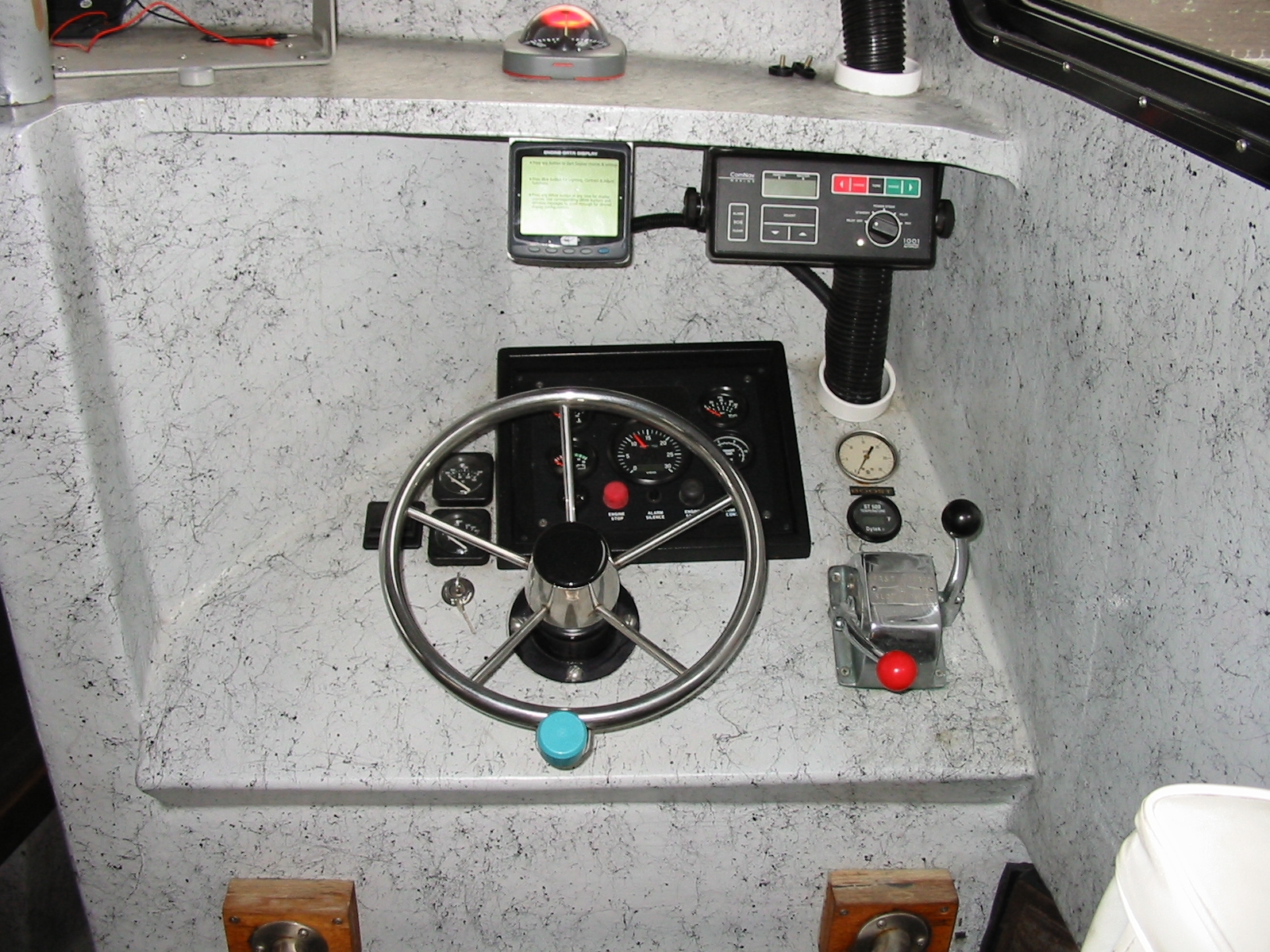 The dash is very simple but effective in providing all of the necessary information for engine monitoring. The analog panel and digital panels were supplied by Cummins. The digital unit supplies a wealth of information along with fuel consumption rate and total fuel use w/ an accuracy of less that 1%. Ronnie kept his original pyro, boost and transmission gages for back-up. His Comnav auto pilot hasn’t missed a beat in over 7000 hrs of boat operation. 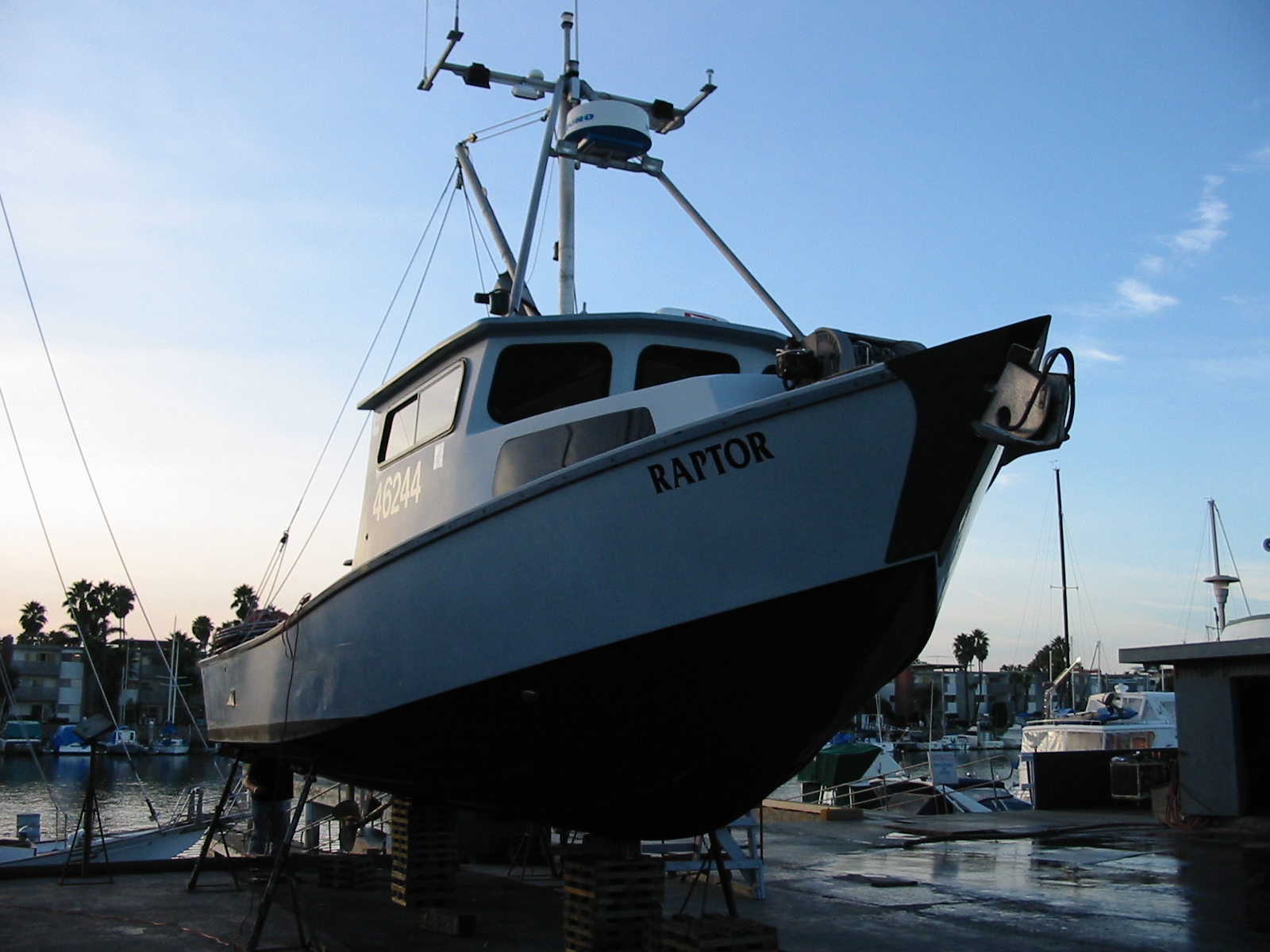 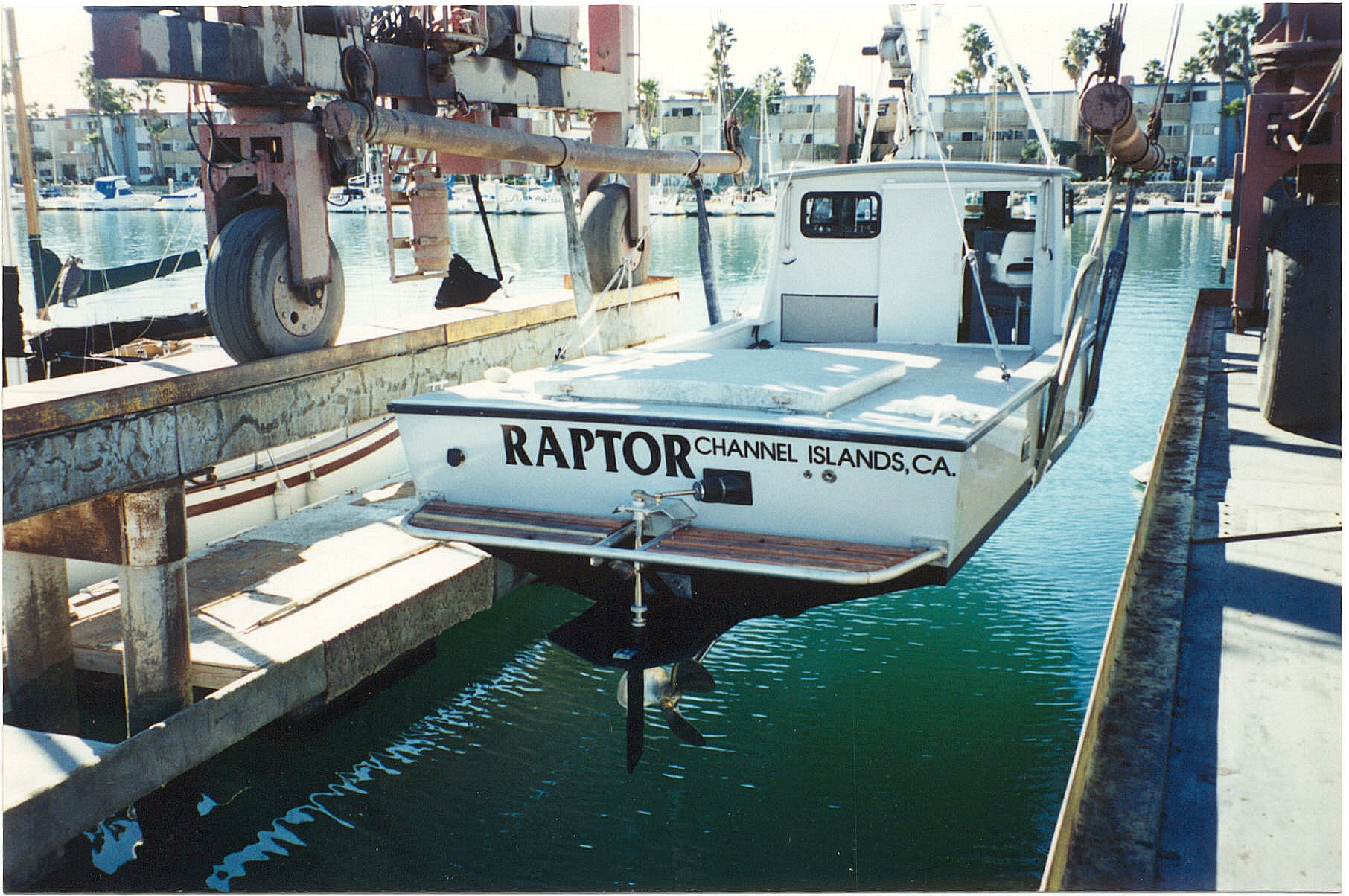 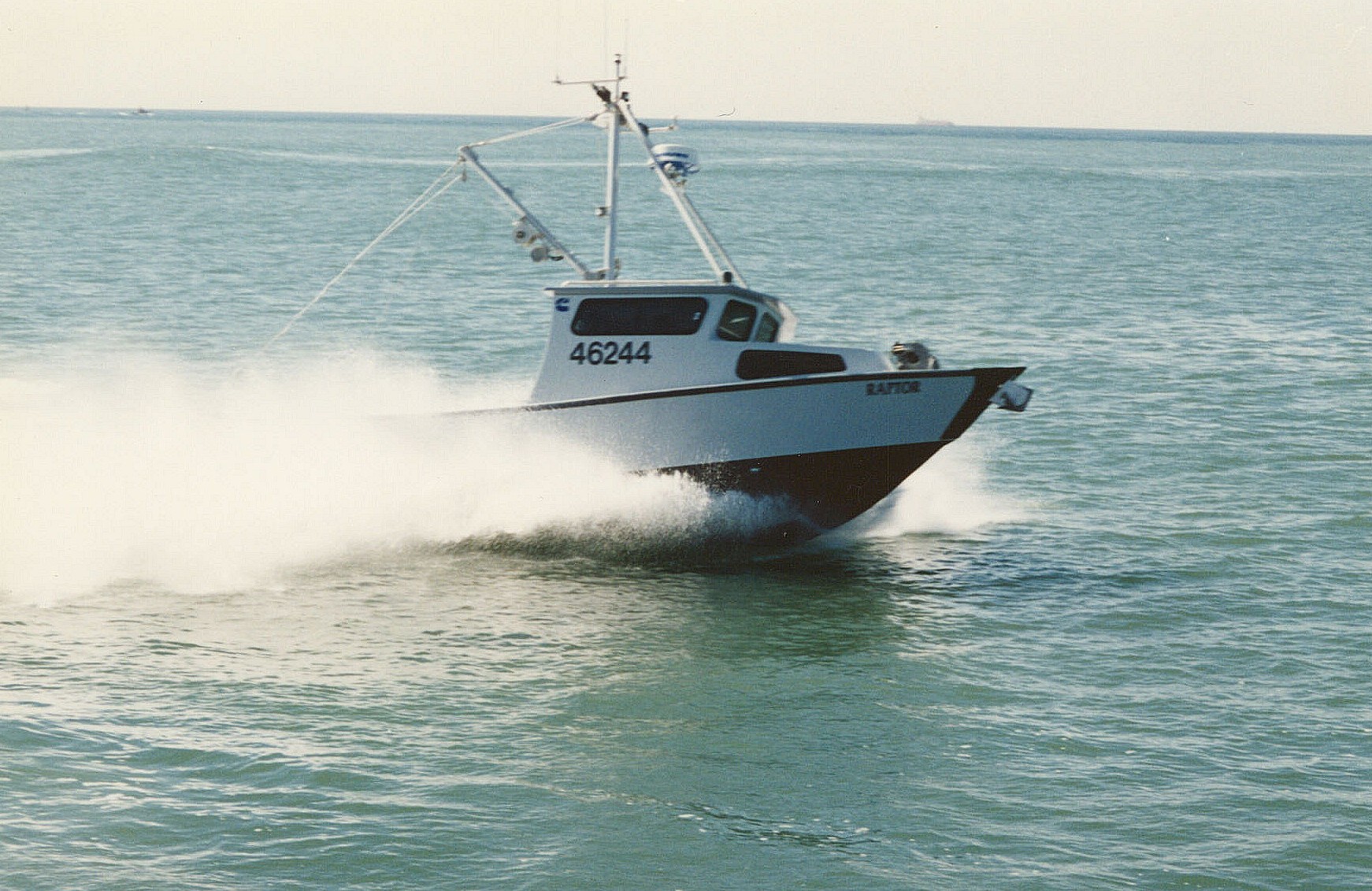 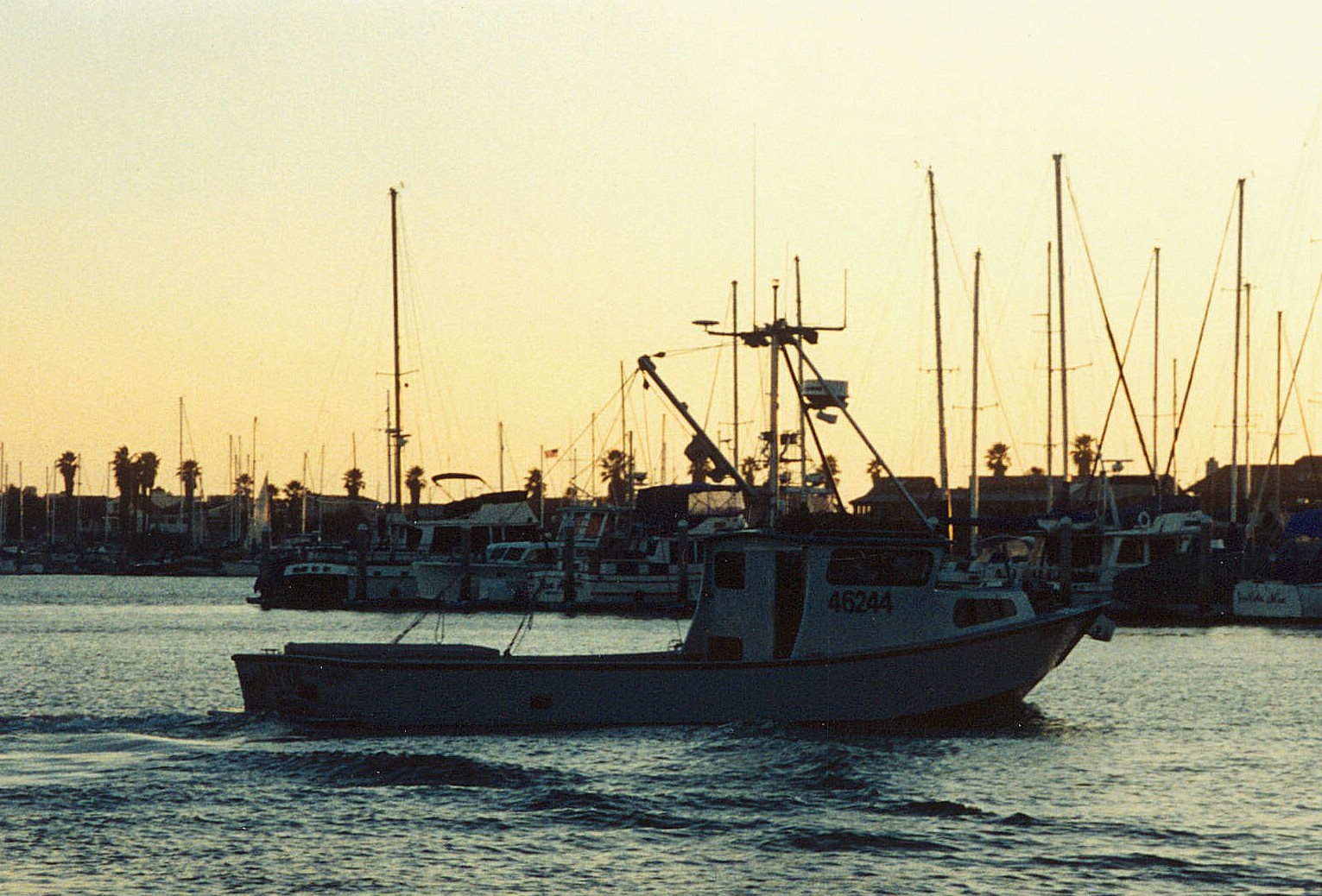