I’ve been reading diesel engine owner’s manuals for over 2 decades and between the last three boats I’ve had, and the 100’s that I have worked on, this term never came up? Did I miss something?

I think I coined that term about 10-12 years ago when I finally had enough of trying to explain the effects of salt water and the general marine environment that diesel engines operate in. It’s this marine environment that constantly takes its toll on marine components and has absolutely nothing to do with operation of the engine or vessel hours. I had figured out well over a decade earlier that many of the components in a marine engine that “go to crap”, so to say, are  way more related to early or premature failure due to having been in and or around salt water than actual engine hour use, or what most consider everyday “wear & tear”.

In fact, some of the most critical components of a “High Performance Marine Diesel” start the process of “Marine Age”-ing the very second these components come in contact with salt water. And because of their base design criteria, that in some ways forced the engineering of these components that direction, that the marine ageing process will   make or break that engine early on in its potential life long before the engineers thought it would, or could.

Think “Marine Age” and nothing else when it comes to a cooling circuit system on seawater inside of the engine it that is comprised of mixed metal alloys. The couch engineers that write maintenance intervals base everything on the engine hour meter – This is Completely Ridiculous! You have had seawater inside your engines cooling system for how many years? 3, 5, 7? and do you really think “Mother Nature’s” destructive work stops when you turn off the key? Think again…  And it’s just not inside as it starts on the outside too with small drips that does unbelievable amounts of damage over time.

When you decide it’s time to purchase a used car, usually the first question to be asked of the current owner is “how many miles does it have?”. Well why not? …It’s a great question after all. If someone were to tell you that the vehicle had 225,000 miles on the original engine, you could surmise that the vehicle was probably well maintained but in all likelihood the vehicle has given the better part of it’s life and it’s just a matter of time before something “catastrophic” happens. Now on the flip side of the coin, if the current owner were to tell you that the vehicle had only 35,000 miles, you would say to yourself that the vehicle is just beggining to be “broken in” and that the purchase would be a prudent one. Why the drastic difference in assessment in comparison to boats and marine engines? Well unlike boats, cars exist in a much less adverse environment free from the corrosive effects of salt water. Barring any wildly outstanding circumstances, cars for the most part age the same which allows the assessment of mileage to serve as a standardized indicator for gauging the useful life of a road vehicle. The hour meter on a boat doesn’t even come close to indicating the true condition or real value of a marine engine… it’s much more complicated than that.

So why now? Why hadn’t this term, “Marine Age” surfaced or mean what I know it means today 30, 40 or 50 years ago when there were marine diesels even back then? Why is it we have 30, 40 & even 50 year old Detroit’s, CATs and Cummins diesels that “Marine Age” was not something you really did not think much of? But now, it’s the main ingredient that affects engine life today (not engine hours) – AND YET – it’s never mentioned in the books, owner’s manuals, in the “Captains Briefing”, or when you hire a “certified tech” or “engine surveyor” to come down to your boat for an inspection or perform normal maintenance? Seems everything revolves around the engine hour meter these days………………Talk about STUPID and one of the biggest fallacies of our time, and what’s even worse, 100’s of  people reading this have paid good money to “professionals” in this industry to get a good engine survey when buying a boat, yet it is never mentioned.

Why is Marine Age so Important Now?

As to why now and not before is real easy if you look at the way the high performance diesels are designed and cooled compared to years back. Two things really separate engines from 30+ yrs ago compared to engines today. One is WEIGHT and the other is power density. Once in a while I use the term “heavy iron” and when I do, I am usually referring to an engine design like that of a Detroit 8-71, CAT 3406, or Cummins 555, 903, or 855. With engines like this, weight and overall size were not really the focus of design. Back then, cooling parts were large and heavy and typically made of thick-walled iron and bronze castings with large passage ways throughout. Output Horsepower was low in comparison to both weight and engine displacement and because of this, rarely did a design need cold seawater to cool the air being pushed into the engine, or the lubricating oil in it, or even in the transmission. 30 HP per liter was about all these engine developed and a 350 HP diesel could easily weigh 3000+ lbs. (about 8-10 lbs. per HP was the norm).

Today, the real design focus for all makes of marine diesels used in pleasure boat applications is getting the highest power density possible by keeping the package dimensionally as small & as light weight as possible using aluminum, thin walled castings or fabrications in as many places as feasible, pumping cold seawater thru as many components as needed to allow them to be smaller and more efficient for cooling. Then comes the HP/per liter to make them competitive by fueling these engines so output horsepower is upwards of 70HP per liter of displacement while still maintaining a degree of reliability as to engine life based upon “operating hours” before the engines needs rebuilding from internal wearing of the main components. (There lies the crux of this article, “operating hours”,  we will get to that below)  …Seems that is what the market wants and is the driving force for these types of engine designs. Want to travel at 30~35 K’s in a 38 ft. Sportfisher getting 0.9-1 MPG? You could never do that with a old Detroit 8-71TI or Cummins 903 as the power density of those older “Heavy Iron” engines would never give you that type of performance.

A True Testament to what Marine Age can do:

We split it open to get  the full effect of what happens with a little saltwater, copper based alloys & aluminum “left to cook” over time even though the engine hour meter was not running. This is “MARINE AGE” to the max!!

And if you want more, just go here for an eye full—Every picture here shows what “lack of proper case gets you in the end: Aftercooler Disasters

BUT, these poor owners (two of them) are not at fault—It’s the  idiot techs and mechanics, and worthless engine surveyors that the owners have spent good money on  over that last 15 years that have no clue on the effects of “Marine Age” on the seawater components, especially the aftercooler, on the engine. But they sure were all concerned about that oil sample and that could be used to determine engine conditions—Talk about more complete Horse Manure in 99+ % of the cases like this.

All that was called for in the O&M Manuals at that time and up to about 2005-ish, was “rodding” out the core to remove any debris every year. Cummins and their marine techs and “teachers” at school are also clueless on this. Shame on all of them.

A quote from the owner:

“I am diligent about changing my zincs every 3-4 months, changing my oil & doing all my inspections  at the engine hours specified.. Why do my engines now need 1000’s of dollars in repairs at such low engine hours? I was told diesels can go 10,000 hours yet I have even got 700 hours yet.”

Well there it is in a nut shell—“Marine Age” has been working on the insides of your “mixed metal aftercoolers” for 9 years now and the clock never stopped ticking even when the ignition key was turned off. .. The results are clear, both due to the base design or construction, & the complete lack of proper and timely maintenance that was all amplified by dry factory assembly…….………………………….Could this have been 100% avoided?  That is a 100% yes without exception with proper assembly & maintenance from DAY 1………

So where do be go from here?  This is real simple.. You have to throw out all of the maintenance intervals in the O&M manual that pertain the anything SALT WATER related and think “Marine Age” and a clock that never stops, although it can be slowed down significantly by “Fresh water Flushing” ( another subject and article)  .. It’s really that simple.. Saltwater cooled aftercoolers (SWAC) are the big one with seawater pumps and heat-exchangers after them. Most heat exchangers only have copper based alloys in them so are usually good for 3-5 years between maintenance intervals. Seawater pumps vary as to there design and are greatly affected by engine hours due to actually wearing out the moving parts inside them………………

So here is where you can end up 22000+ hours and 9 years down the road if you think “Marine Age” on you high Performance Marine Diesel that has a mixed metal saltwater cooled aftercooler..  We see this all the time with the guys on the Seaboard Team that follow our lead as there lively hood depends on it…. These are picture form the 6CTA 8.3 ‘s I put in the vessel Pacific Dawn owned by Pat Cavanauh back in mid 2000.  The aftercoolers were taken apart when new and assembled per our protocol (DAY 1) and then serviced about every  2-3 years since.  These pics were taken during a routine service at about 9 yrs and 22,000+ hours. 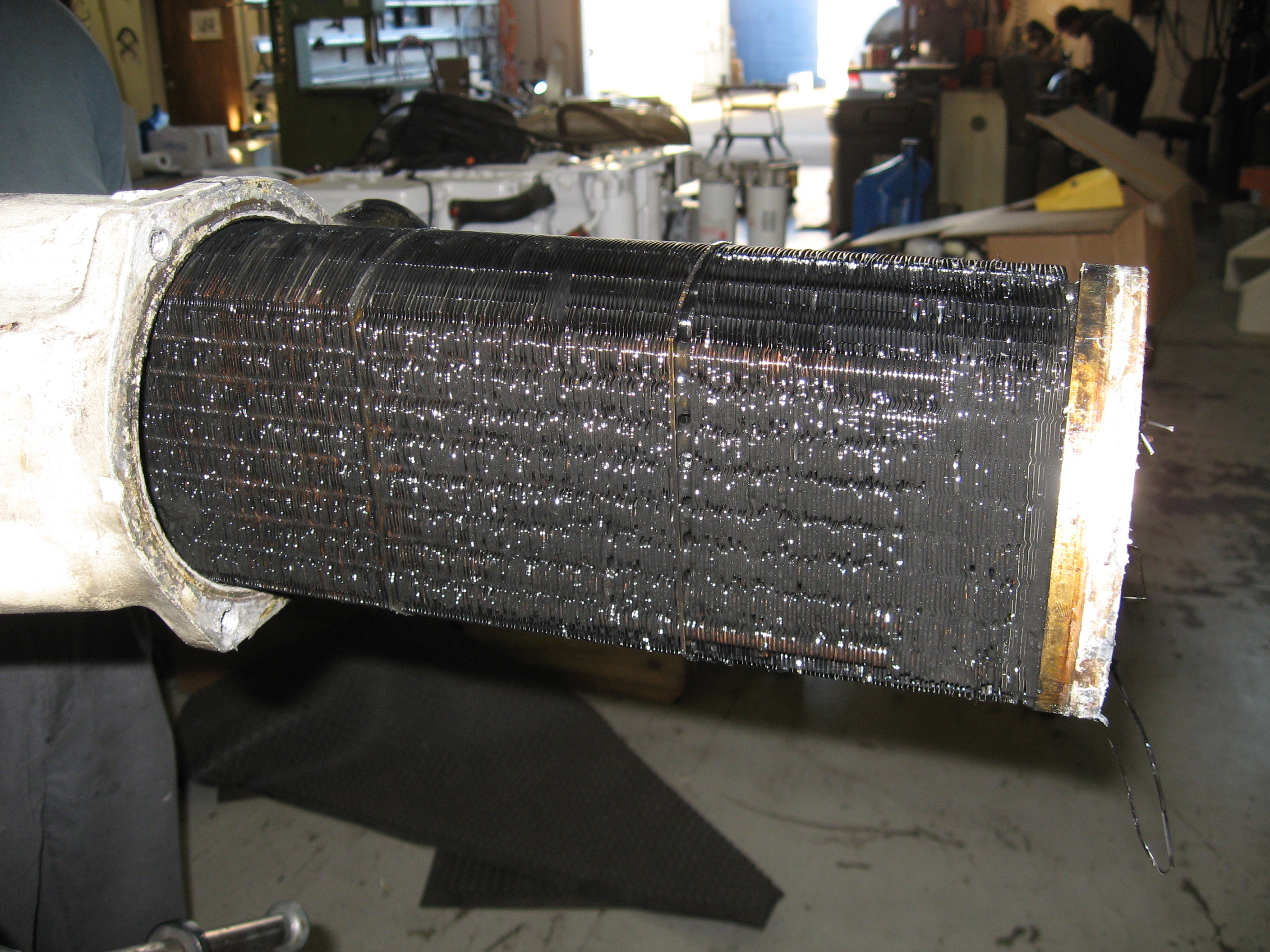 Quite “funky” but this is typical for a high hour engine with 4000-5000 hours since the last aftercooler servicing.. An aftercooler that slides out easy and looks like this—Cleans up like 100% new and has a decade plus more service still in reach. 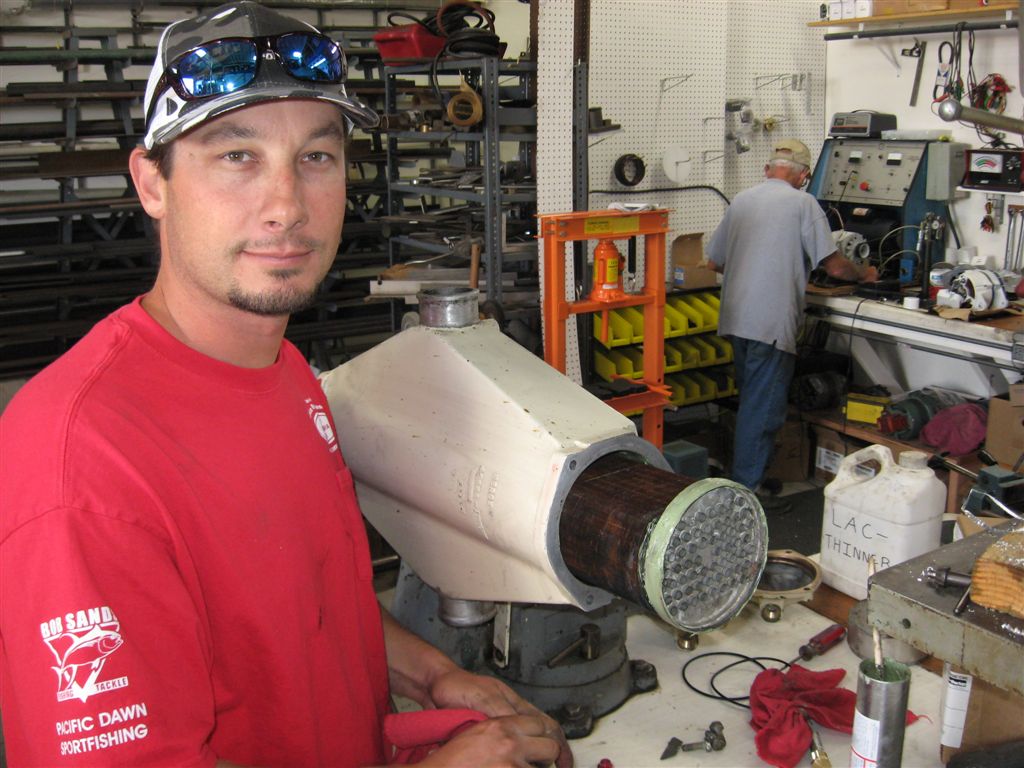 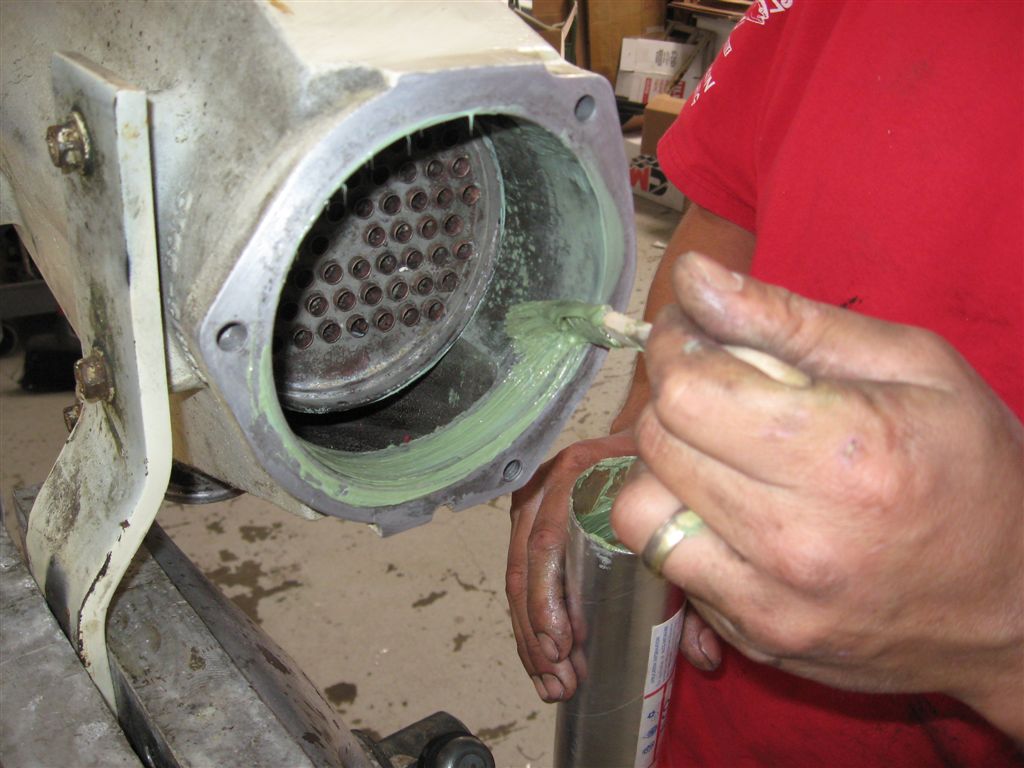 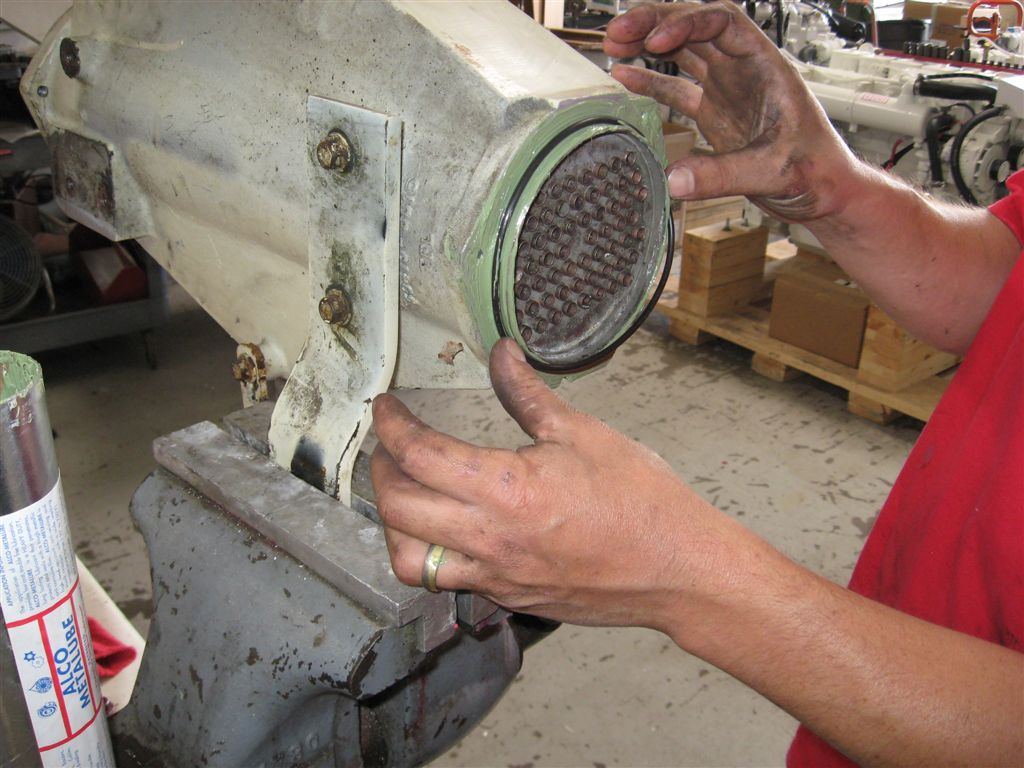 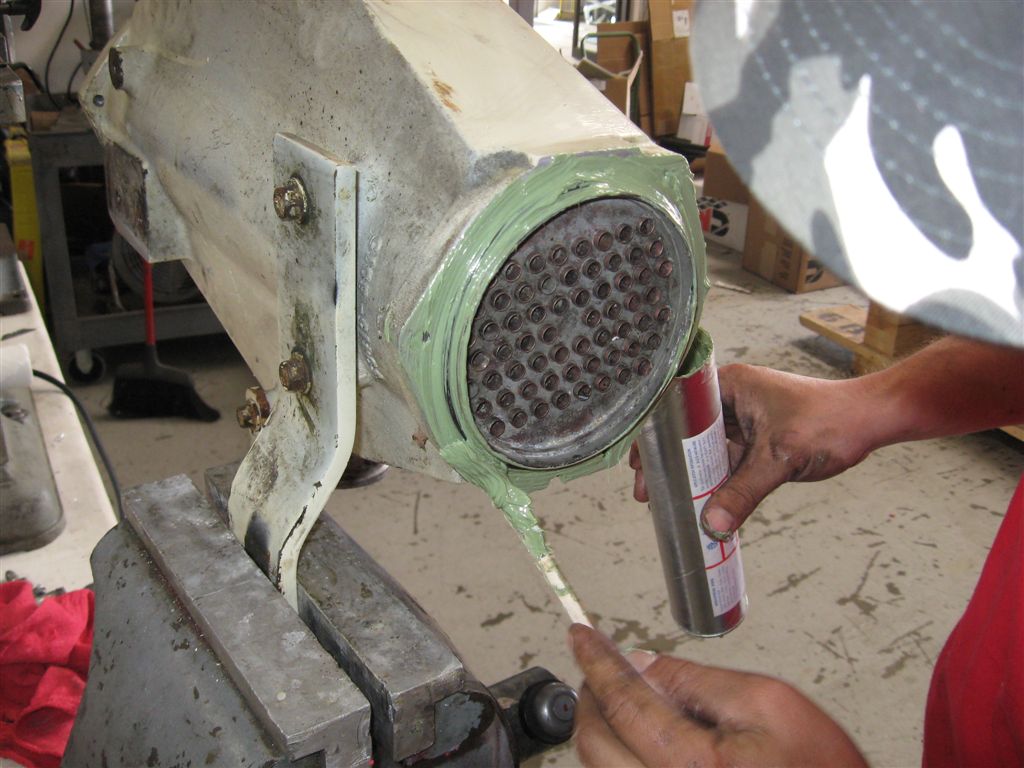 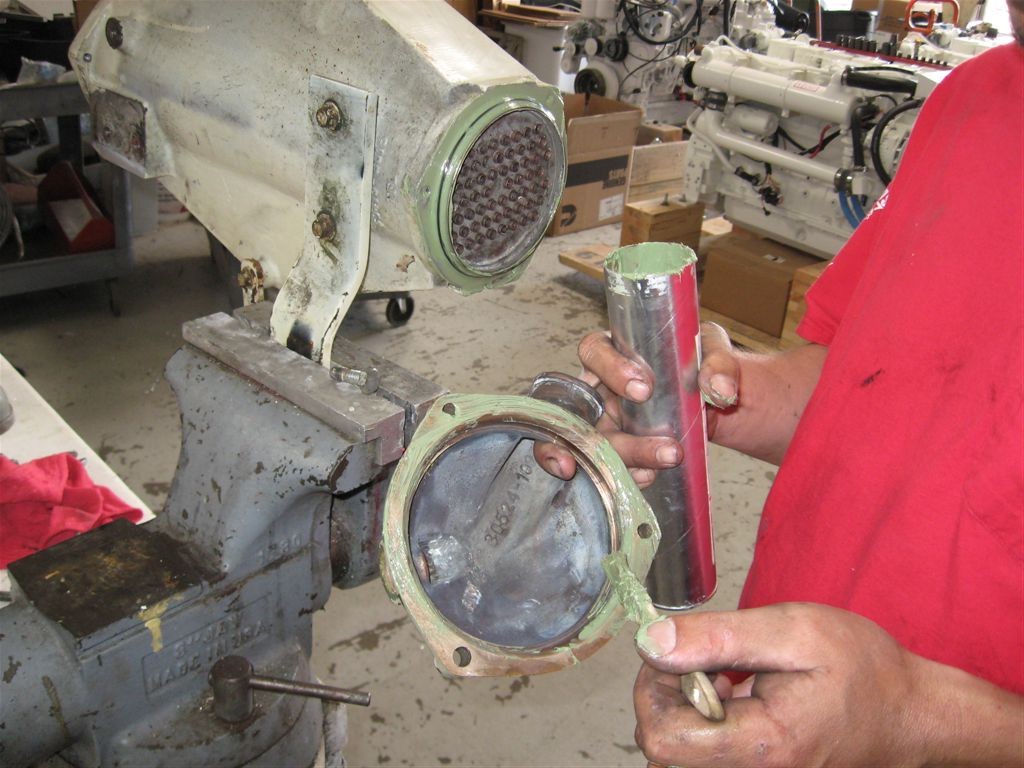 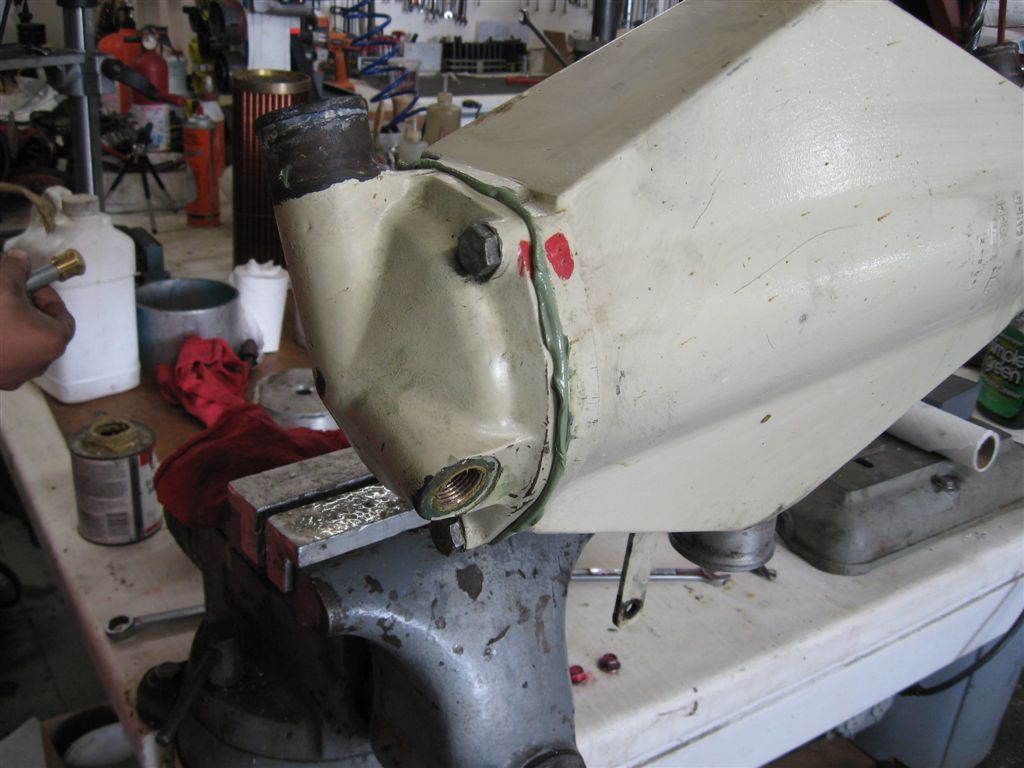 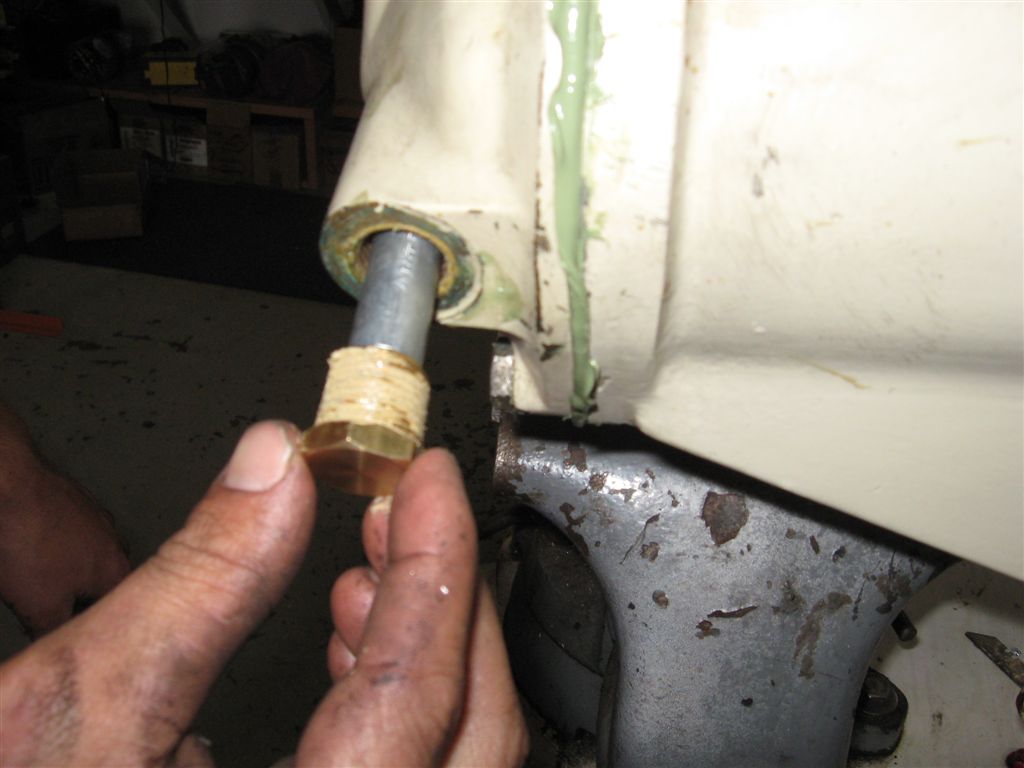 The units came apart like butter, needed a good cleaning from a lot of low speed running but cleaned up like new.. I finally pulled these engines for a EPA repower with  32000 hours in 2010 and both the engines and aftercoolers were still in “tip-top shape”.