BOSSEA is a 1985 model Trojan International 10 Meter Flybridge Sedan, built by Trojan/Bertram in Lancaster, Pennsylvania. It was originally powered with twin Detroit Diesel 8.2L engines rated at 250 HP at 3000 RPM. The engines were equipped with 1.5:1 TwinDisc gears turning 1 3/8 inch shafts and 18×20 3-blade Nibral props with a medium cup. In late 2000, these engines had just over 1000 hours and were trouble-free, yet the overall performance of BOSSEA was less than desired. With a full load, BOSSEA displaced an estimated 19000 to 20000 pounds, and was capable of 22-23 knots at the top end in calm conditions. 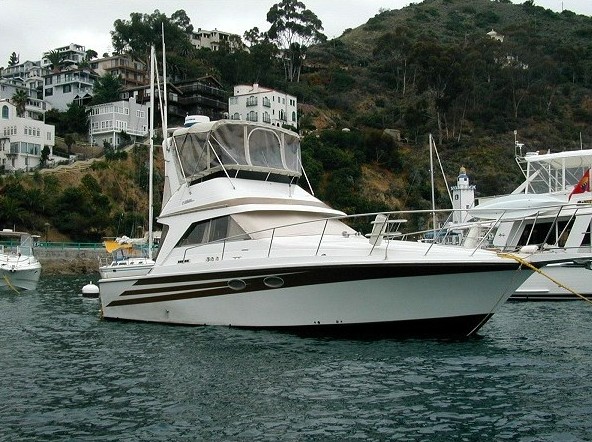 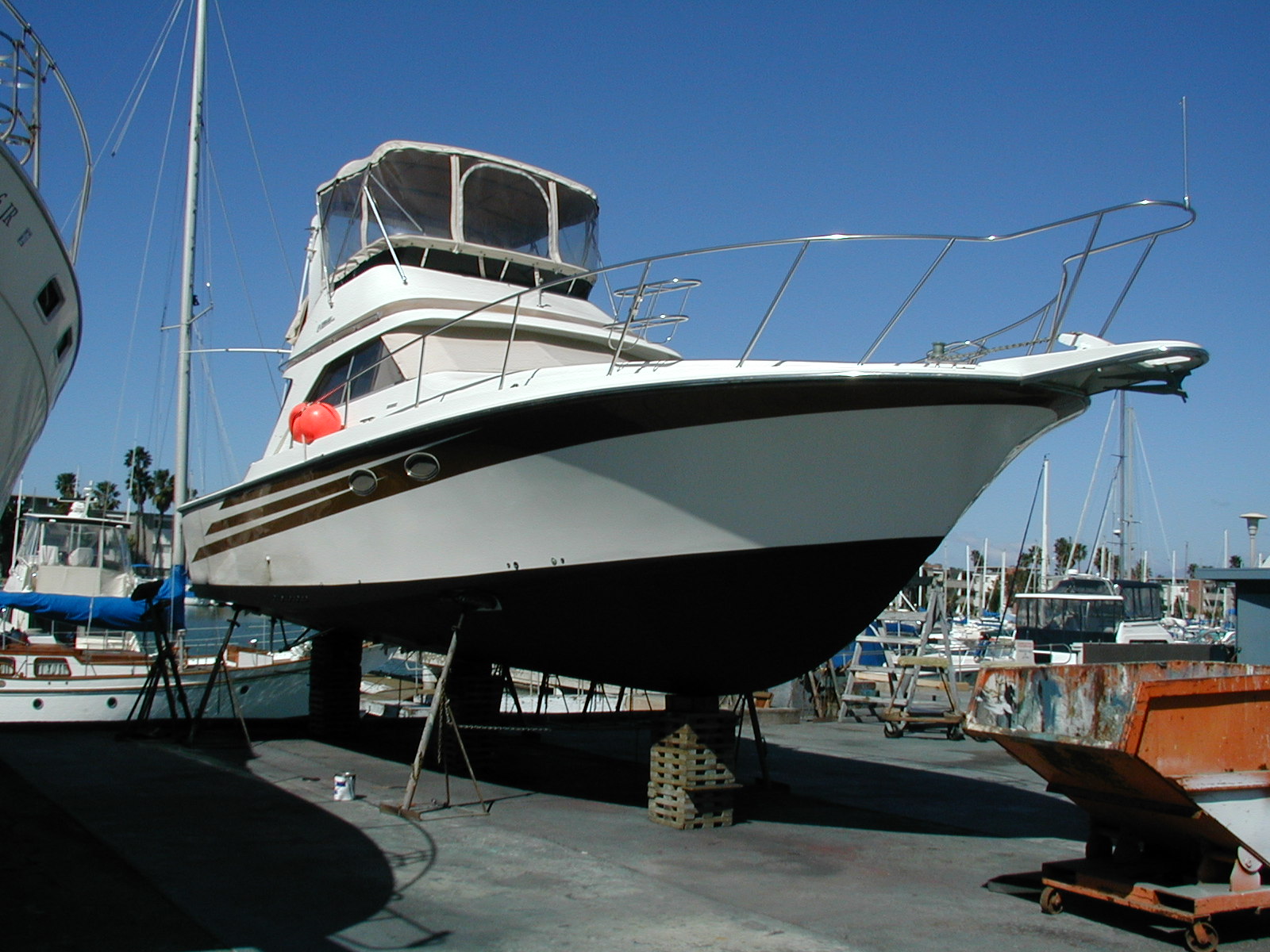 Top RPM achieved was approximately 2900 RPM, suggesting a modest over-propping. She would cruise at 18 knots at 2700 RPM in the same conditions, and get around 3/4 nm/gal. In the more typical boating conditions found off the Southern California coast, BOSSEA would top out at 19-20 knots and cruise at 16-17 knots. This may not seem too bad, but in actual conditions it was extremely difficult to maintain a steady cruise speed of 16-17 knots, especially with following seas. Going up the back side of a wave would naturally drop the stern, and speed would be reduced to12-13 knots, right at the point where the boat fell off plane. This was with trim tabs all the way down. So the typical experience was that a good deal of time was spent getting onto plane, falling off, then climbing back on again. It seemed obvious that BOSSEA needed a little more get-up-and-go to perform to her potential. Because the boat was in otherwise great condition, repowering seemed to be a reasonable way to solve the problem. The next step was to figure out what to repower with.

The deal was struck with Seaboard Marine in September, but work wouldn’t begin until November when they completed an existing repower job in their yard. On November 7th, 2000, BOSSEA left its homeport in Huntington Harbour for Channel Island Harbor in Oxnard where it would be hauled at Anacapa Shipyard. It was trucked from there to Seaboard Marine where it remained until the post-repower sea trial on March 15th, 2001.
That’s over four months from start to finish, not counting the up-front planning. Some time was lost to poor weather, and some to the year-end holidays, but most of the time was used to complete the job. 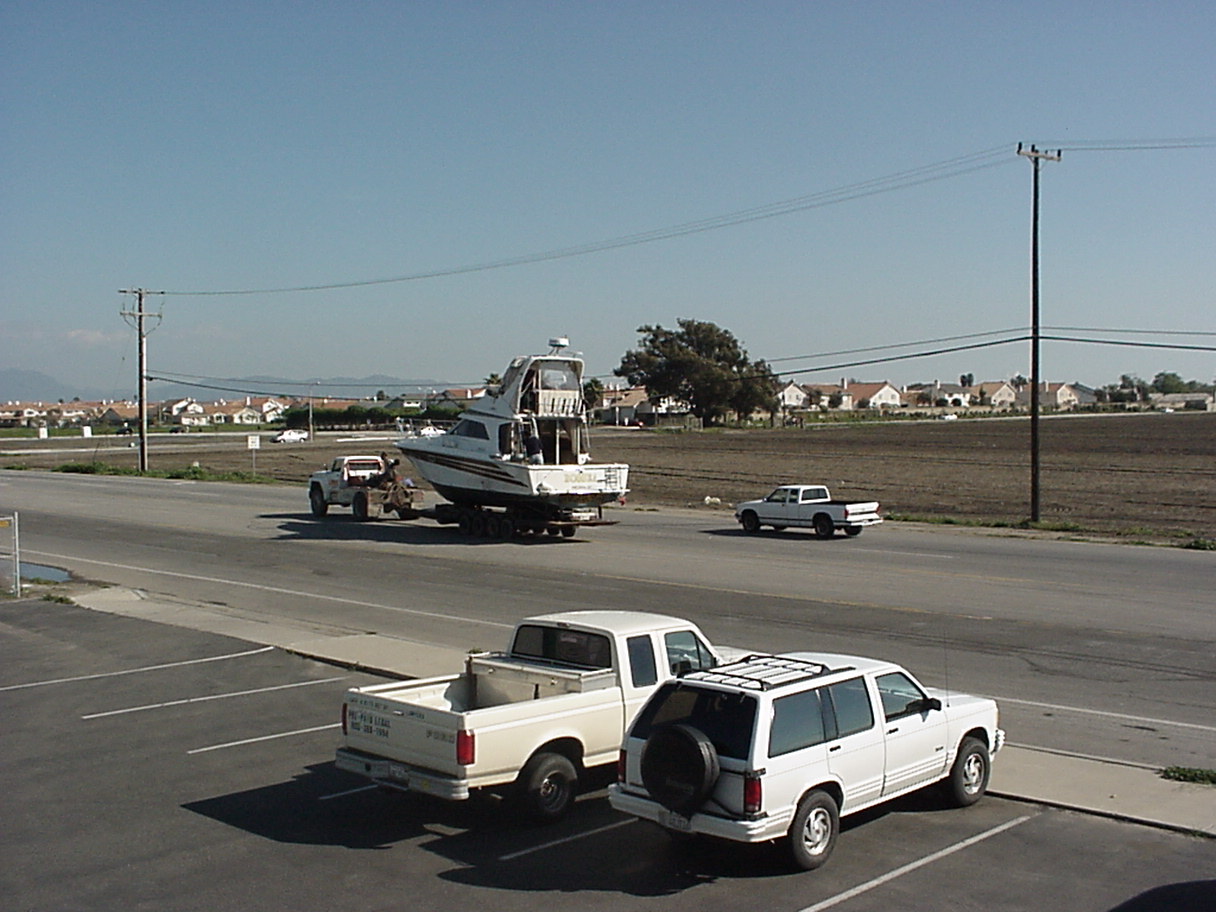 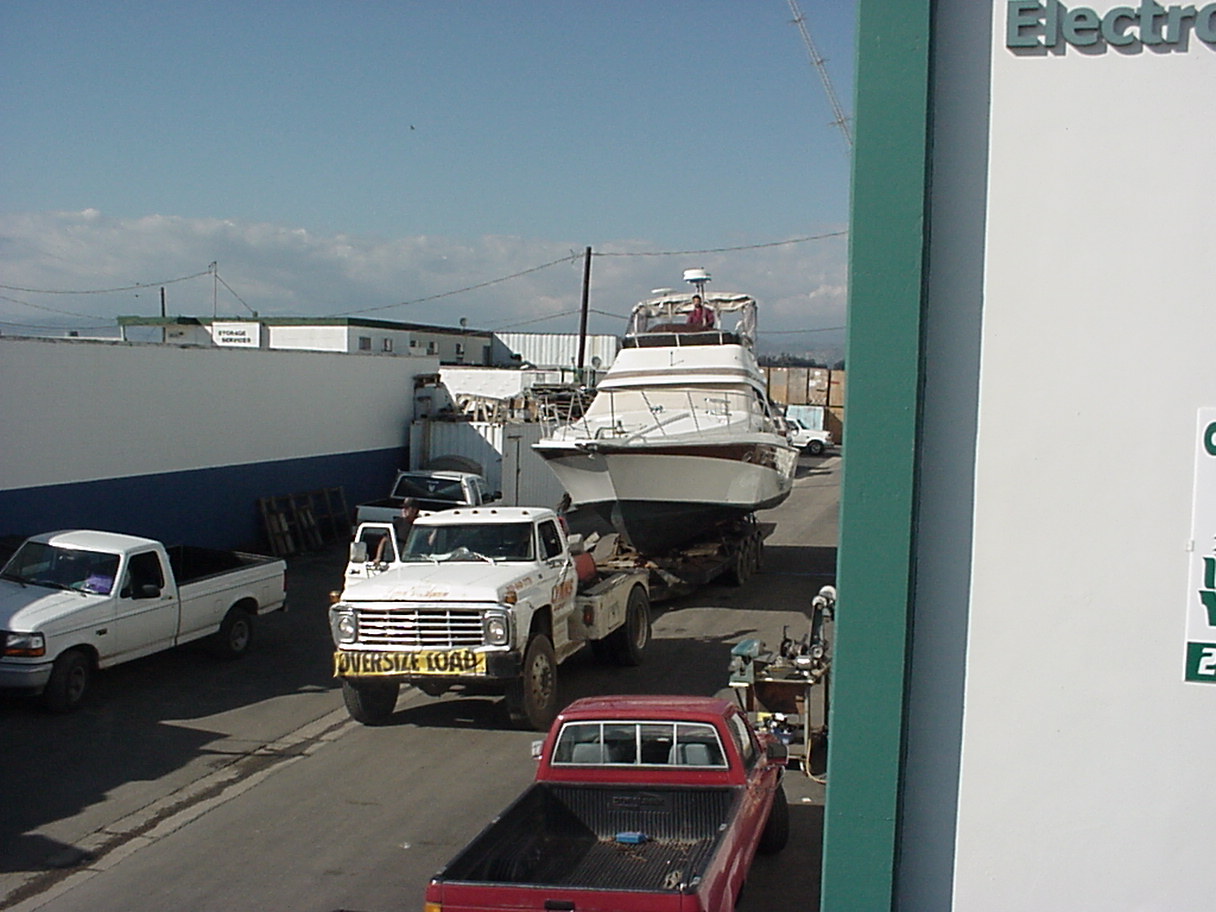 Trucking to Seaboard Marine – This was a little scarey. The boat wasn’t perfectly level on the trailer, and the trip required several twists and turns to avoid low hanging signal lights and power lines. Fortunately, it made it there safely.

Johnson and Towers for a period of time modified the DD 8.2L to produce a 300 HP model with a near exact same form and fit. That might have worked, but they’re no longer making them, and a used engine wasn’t considered a viable option. Detroit Diesel still sells remanufactured 8.2Ls with full warrantees, but only at 250 HP, so that wasn’t an option either. 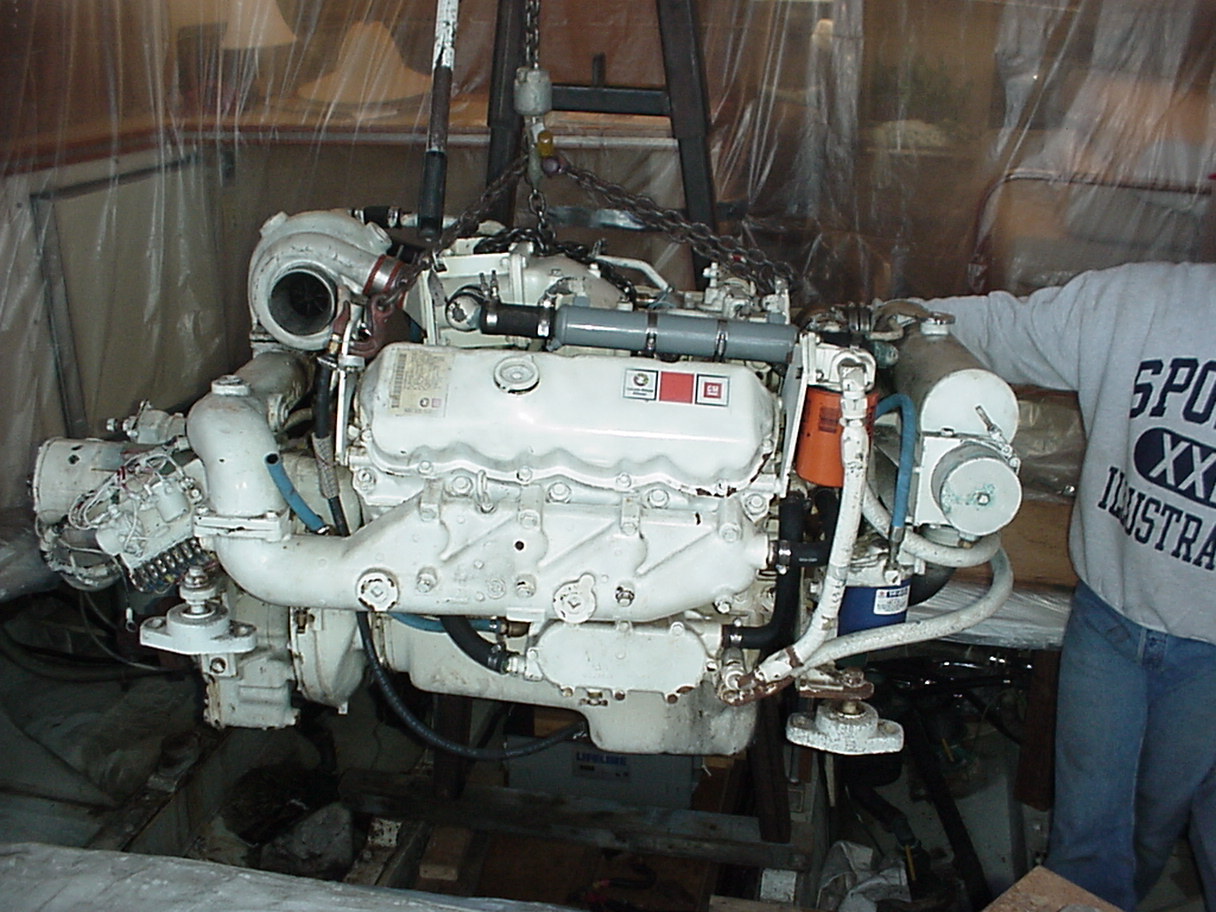 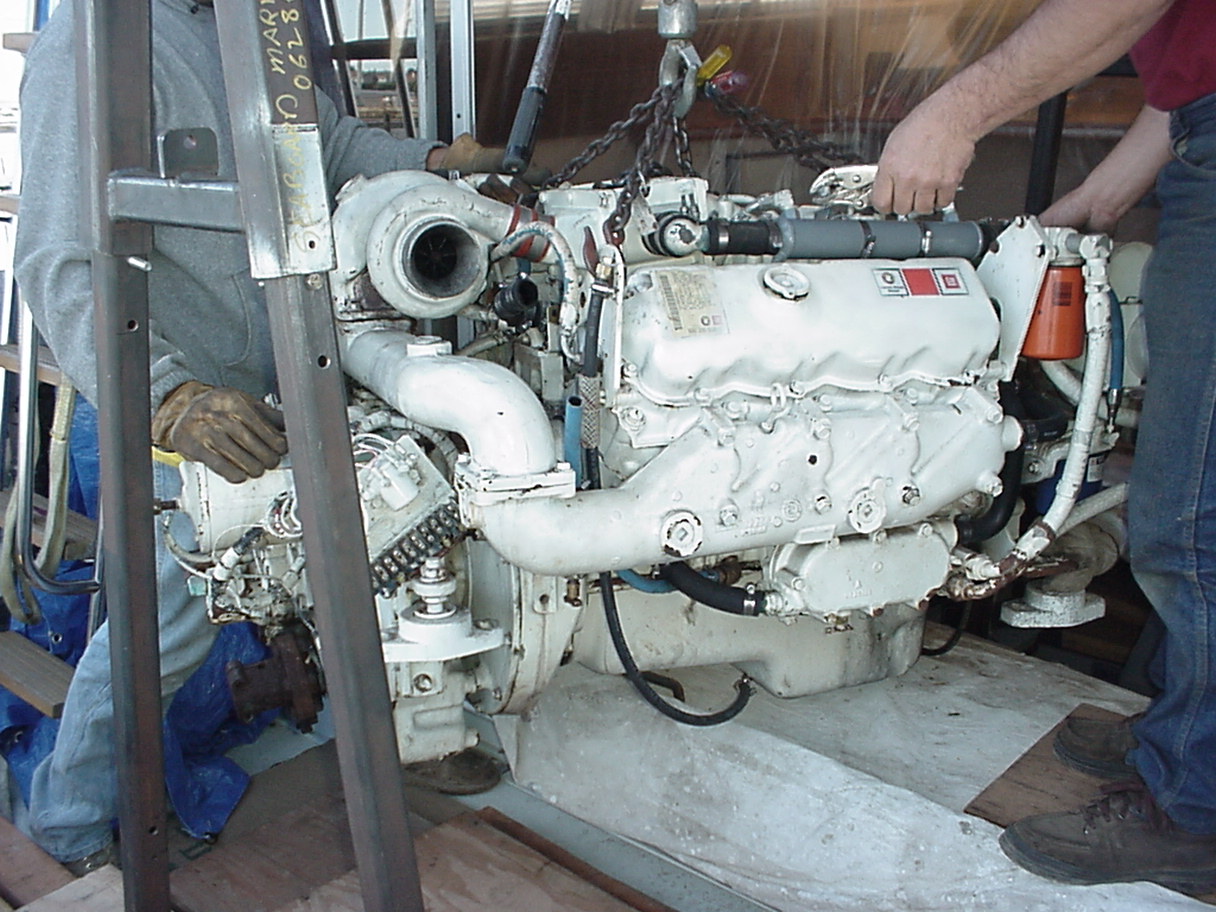 The search was broadened to include Volvo, Caterpillar, Cummins, and Yanmar. After quite a bit of research, it appeared that Cummins and Yanmar provided the most promising options based on reports of reliability, cost, weight, and fit. The Cummins models considered were the 330B and 370B. The Yanmar models considered were the 6LYA-UTE and 6LYA-STE. The Cummins seemed to have the edge based on its longer record of reliability, less expensive parts, and simpler design than the Yanmars. So, the choice was Cummins, and the next step was finding someone to do the repower.

A call to the Southern California Cummins distributor, Cummins Cal Pacific, yielded two recommendations for repower specialists. After meeting with both, having them visit the boat, and providing cost and completion date estimates, Seaboard Marine of Oxnard was chosen to perform the work. Their ability to do the work in their own yard, and their ability to fabricate any needed part right on site was a key factor in the decision. However, this exercise led to the first major hiccup in the project. As a part of the estimate, careful measurements of BOSSEA’s engine room were taken and showed that the Cummins were too tall to fit without major modifications to the boat. Tony Athens of Seaboard Marine told me he added Yanmar to his repower options a few years earlier for just this reason. The Yanmars will fit in some spaces where nothing else of equivalent power will fit. So, Cummins lost a sale and Yanmar gained one. 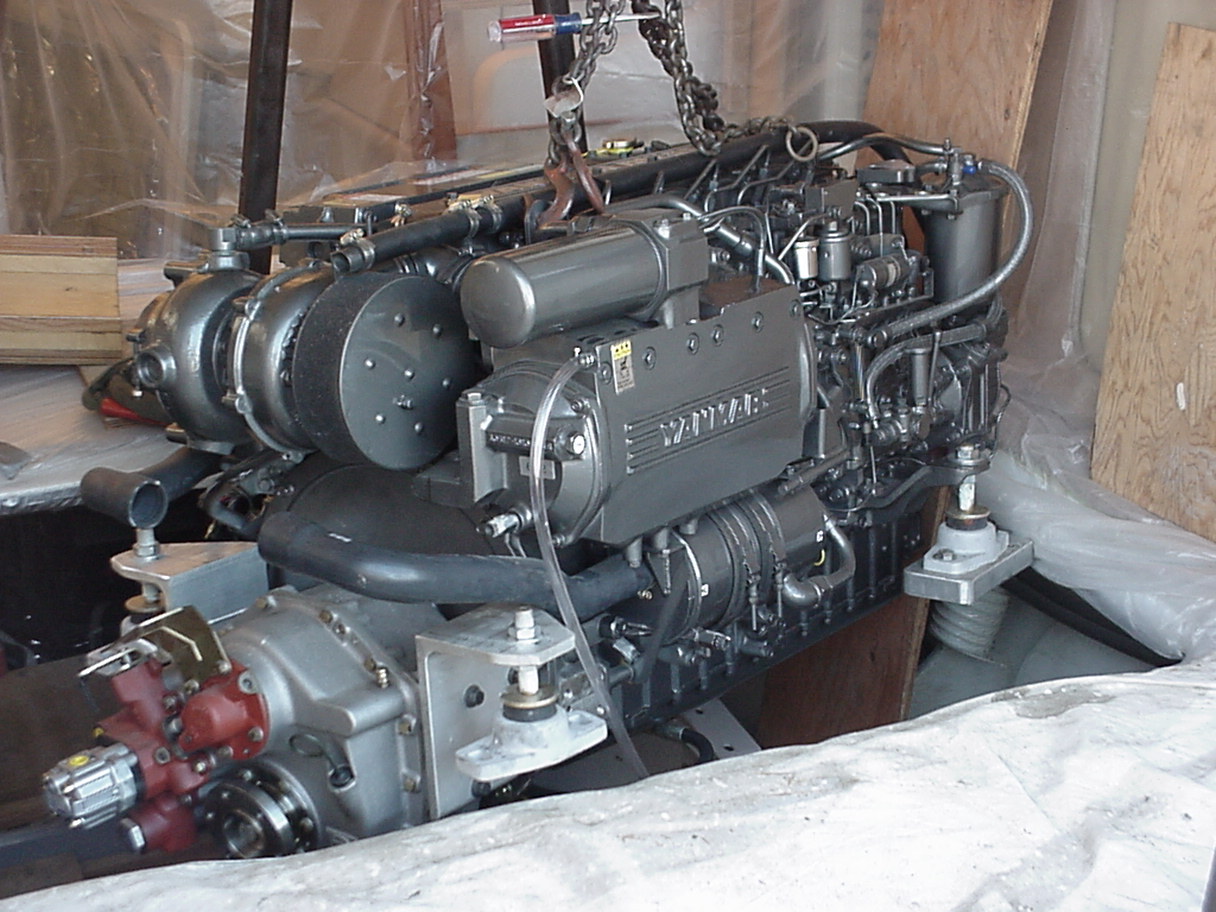 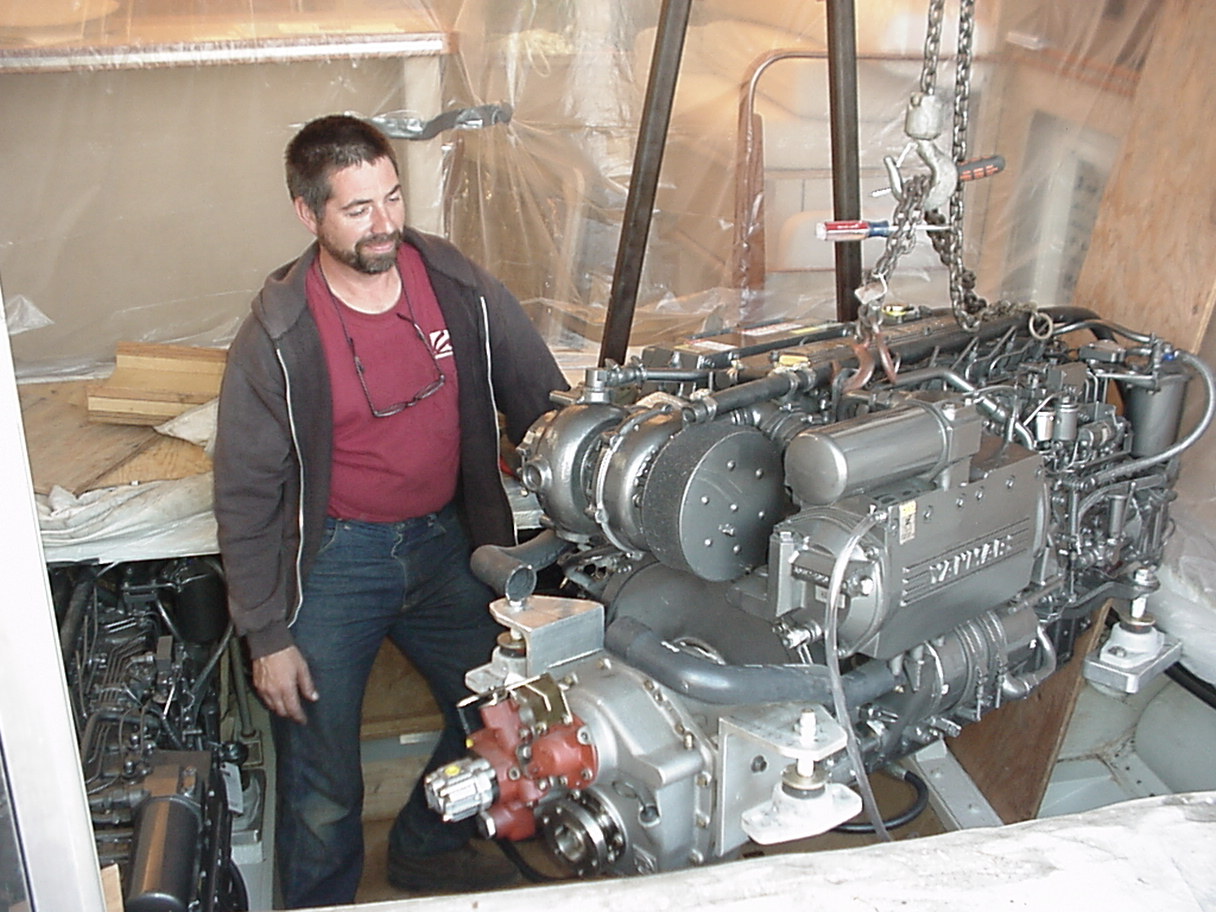 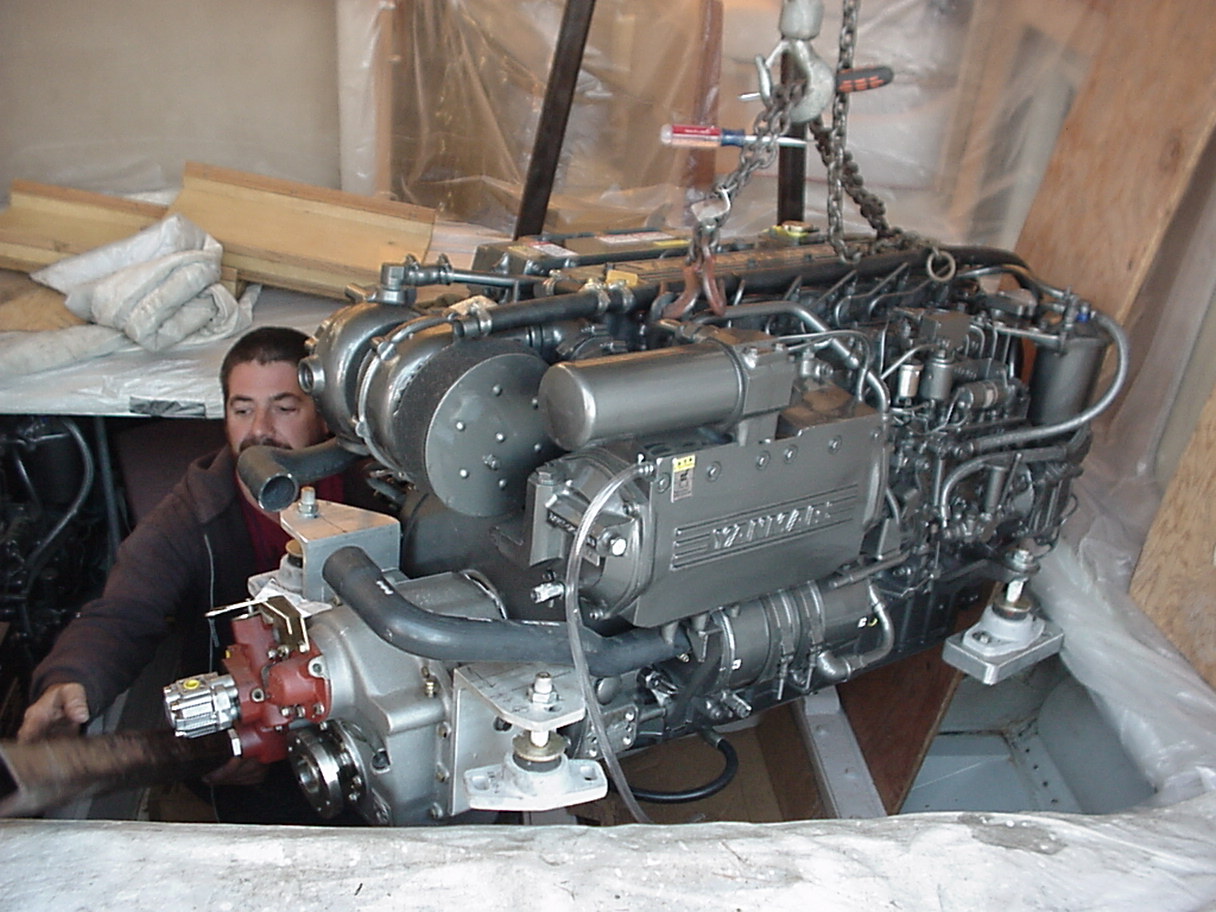 Here’s Bill getting ready to position the new starboard engine. (Notice the bagging and other protection that protects the rest of the boat while the “dirty” work is being done).

Although these engines were the big dollar items in the repower, there were dozens of other items to consider. Some of these items were mandatory as a result of the increase in engine horsepower over the DD 8.2’s, and some were elective. For example, BOSSEA had an Onan 7.5 KW genset model MDJE. It produced plenty of juice, but was noisy, smoky, and vibrated like crazy. As part of the repower it would be replaced with a new Onan 9 KW genset model MDKAL with sound shield. Pulling the engines for a repower is a great time to take care of other work in the engine compartment that may otherwise be extremely difficult, or even impossible. 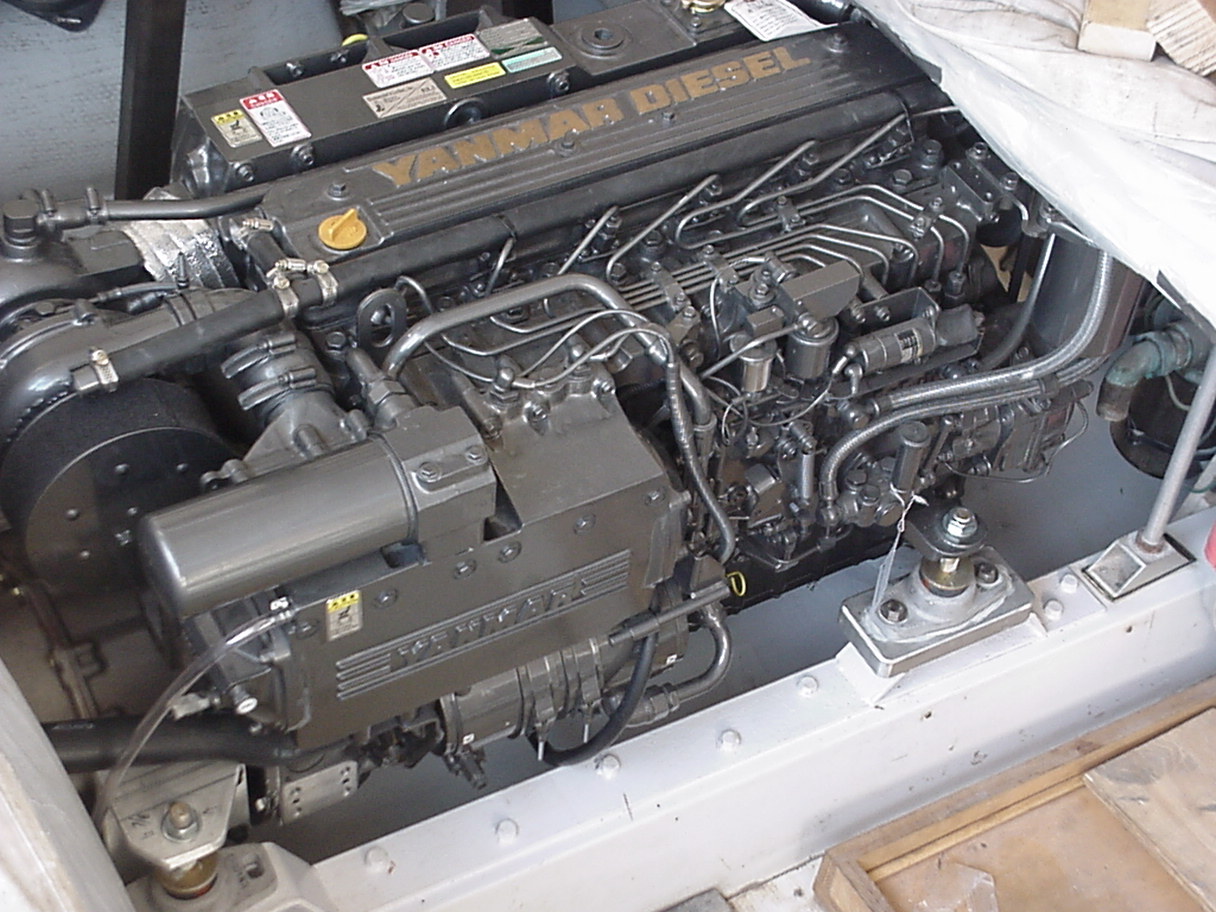 The port engine is roughed into place. Note the custom-made rear and forward mounting brackets. Both were fabricated at Seaboard. The existing stringer cap bracket (painted white and bolted to stringer) was reused to avoid major rework to the stringers. 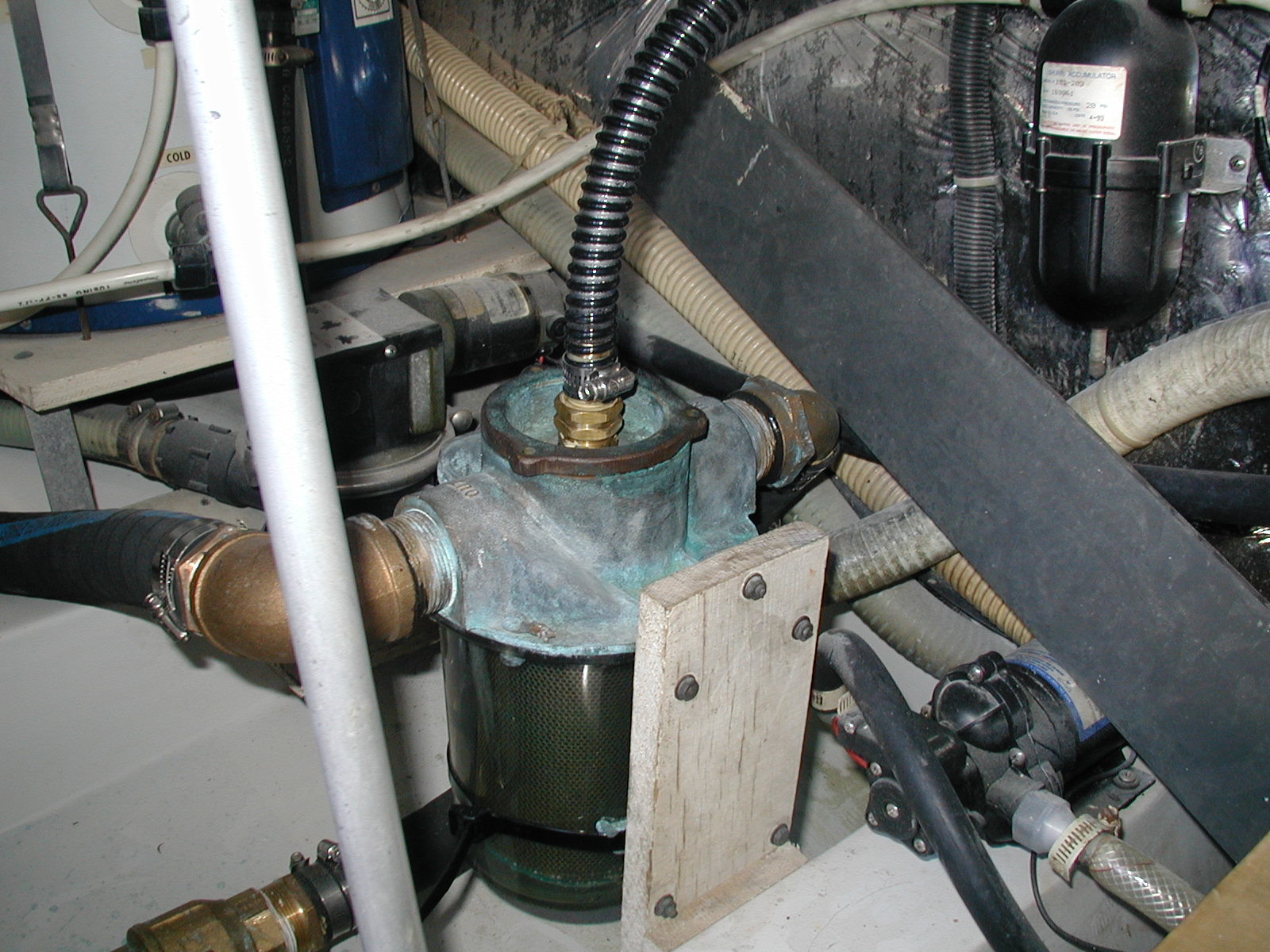 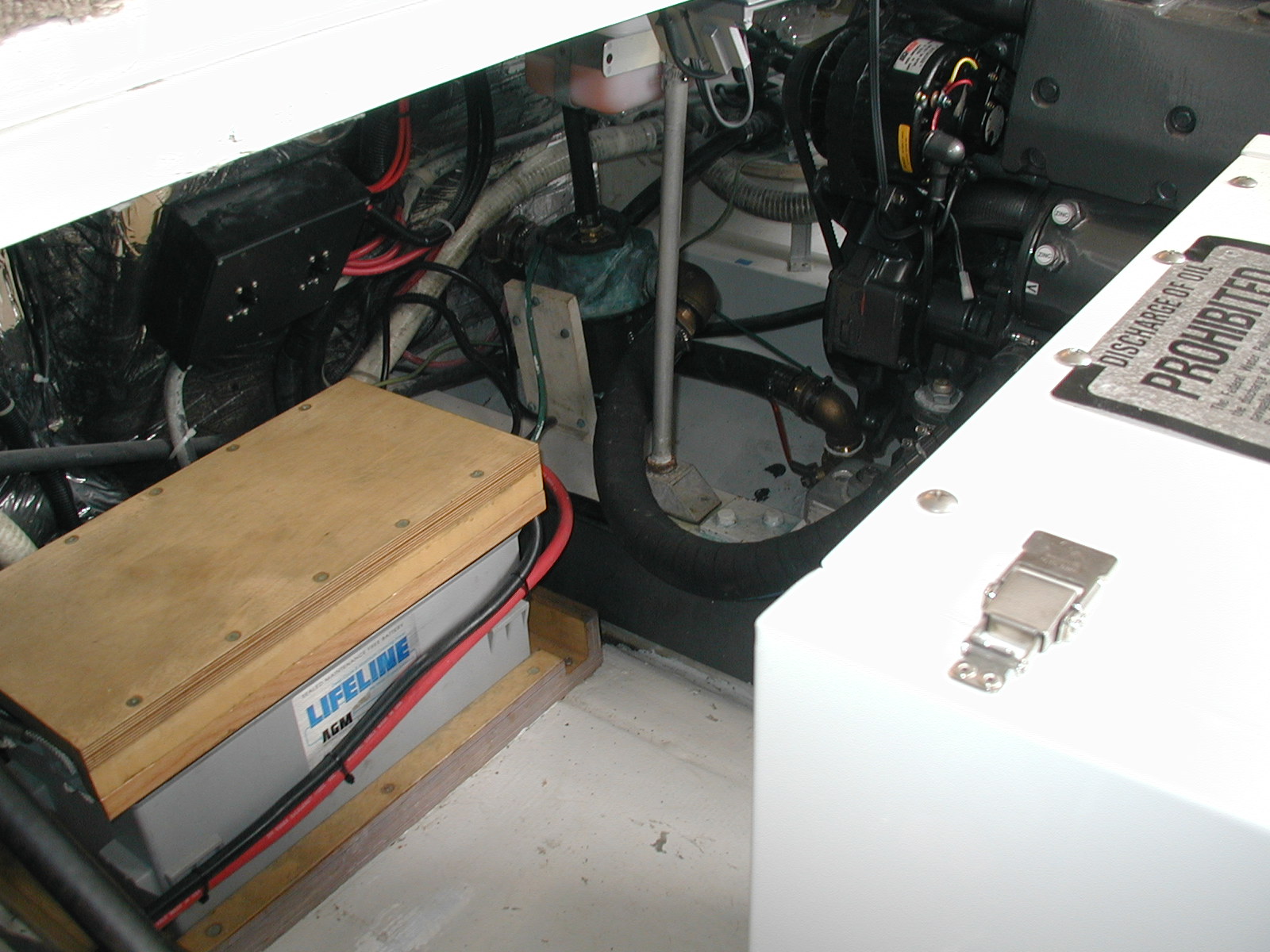 Fresh water flush plumbing – New fittings and hoses were attached to the raw water strainers and connected to a cockpit- mounted manifold to allow fresh water flushing of both mains and the genset. 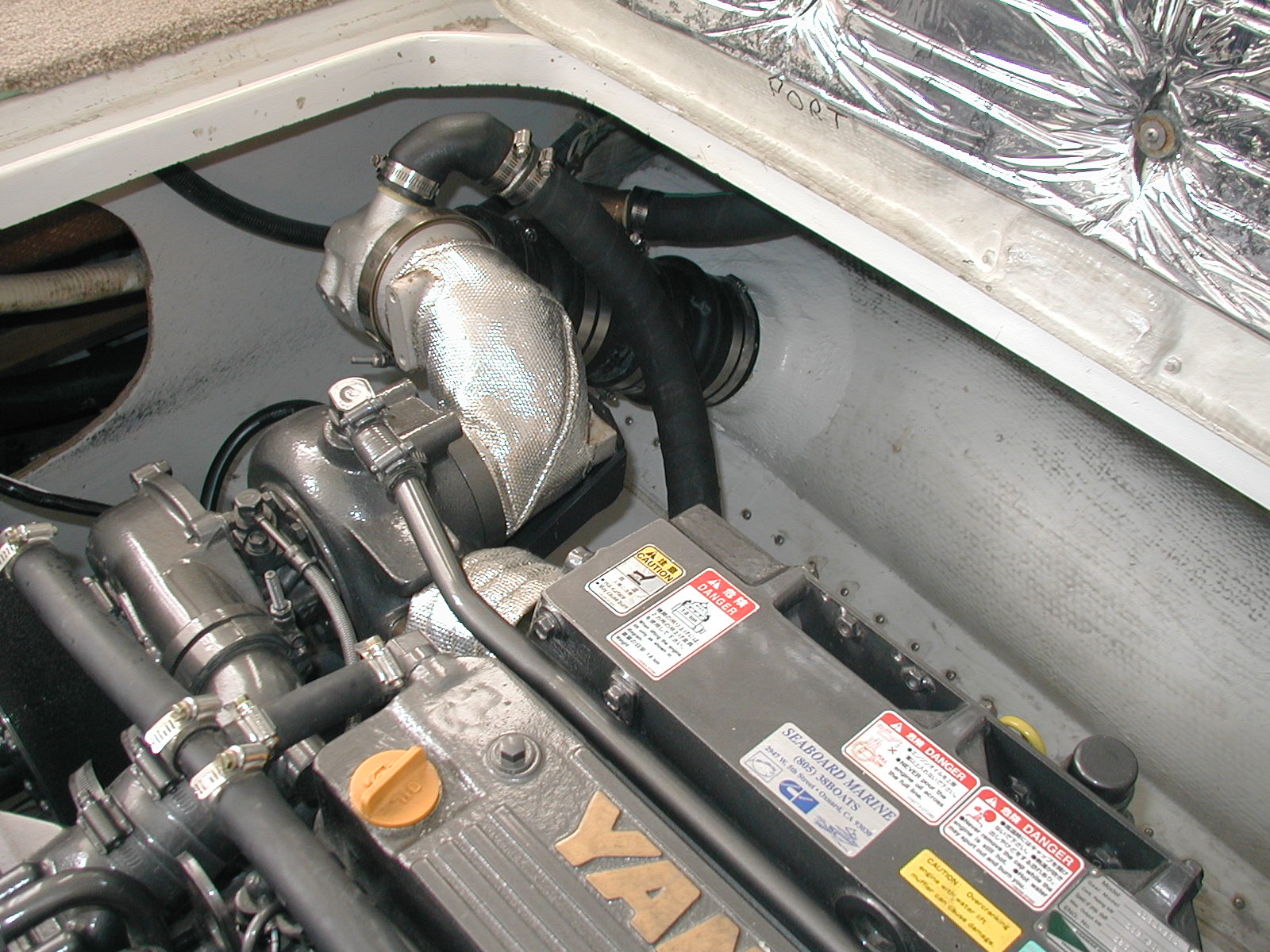 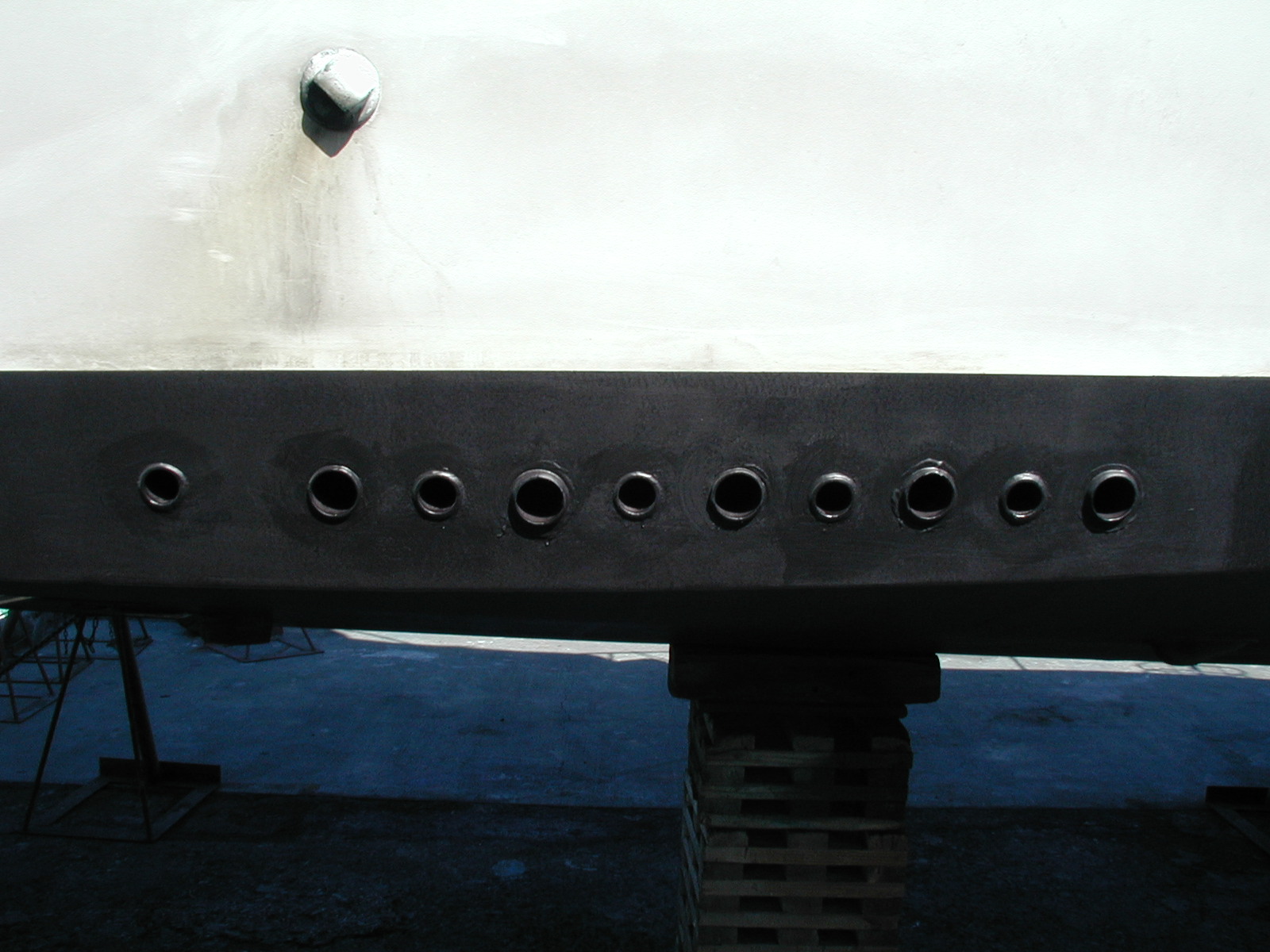 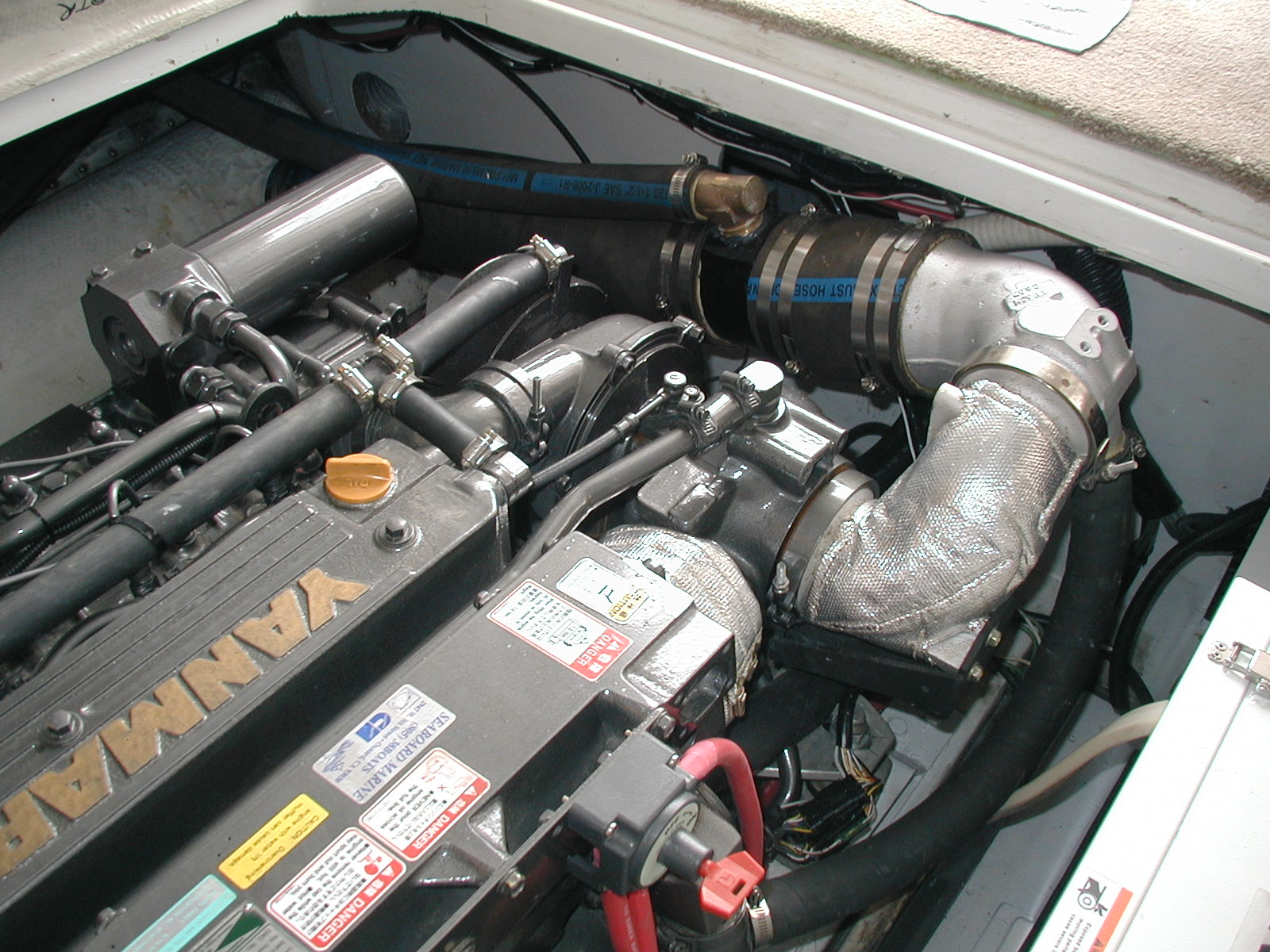 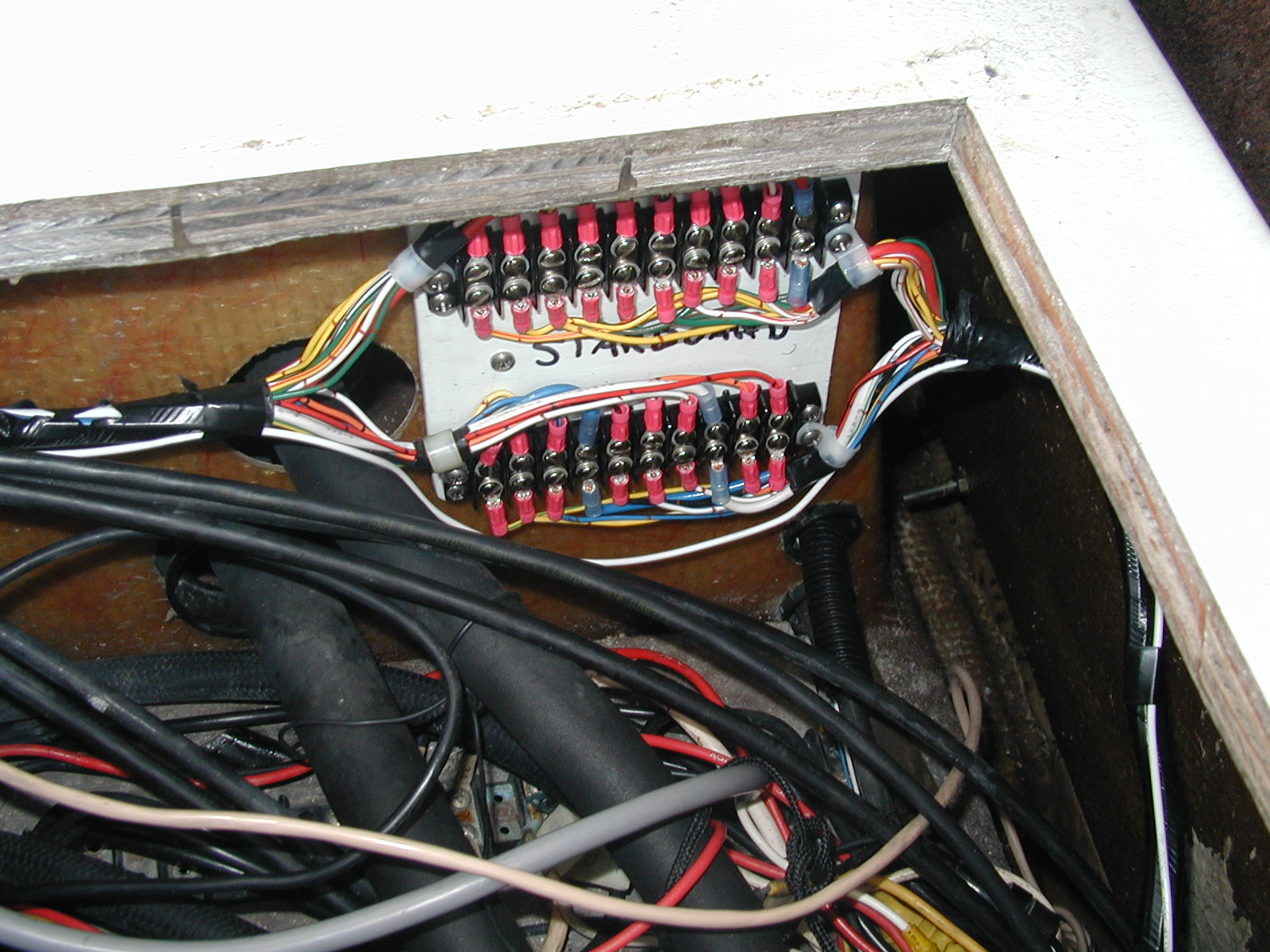 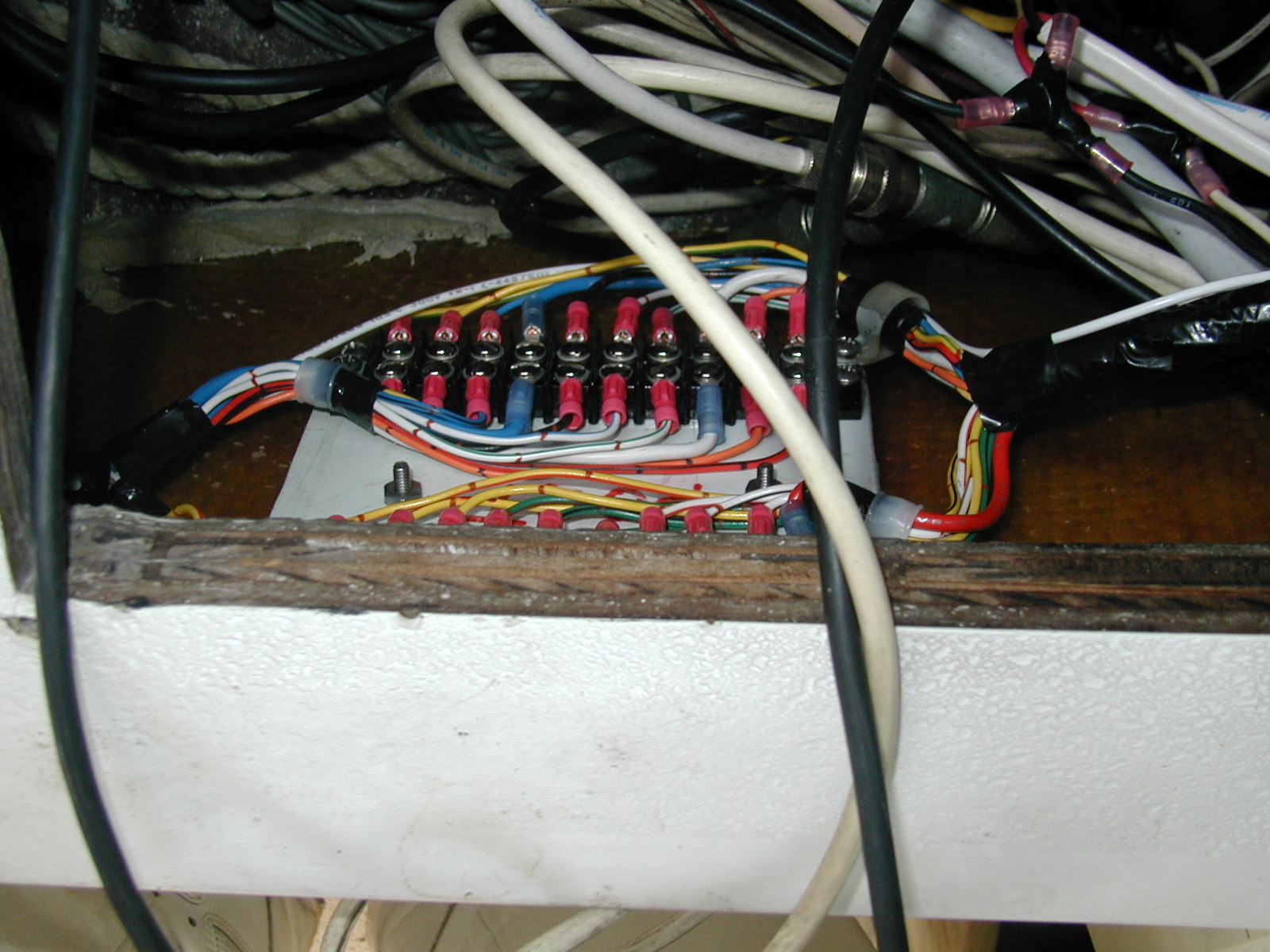 New electrical harness – New junction blocks for port and starboard were installed near the helm. 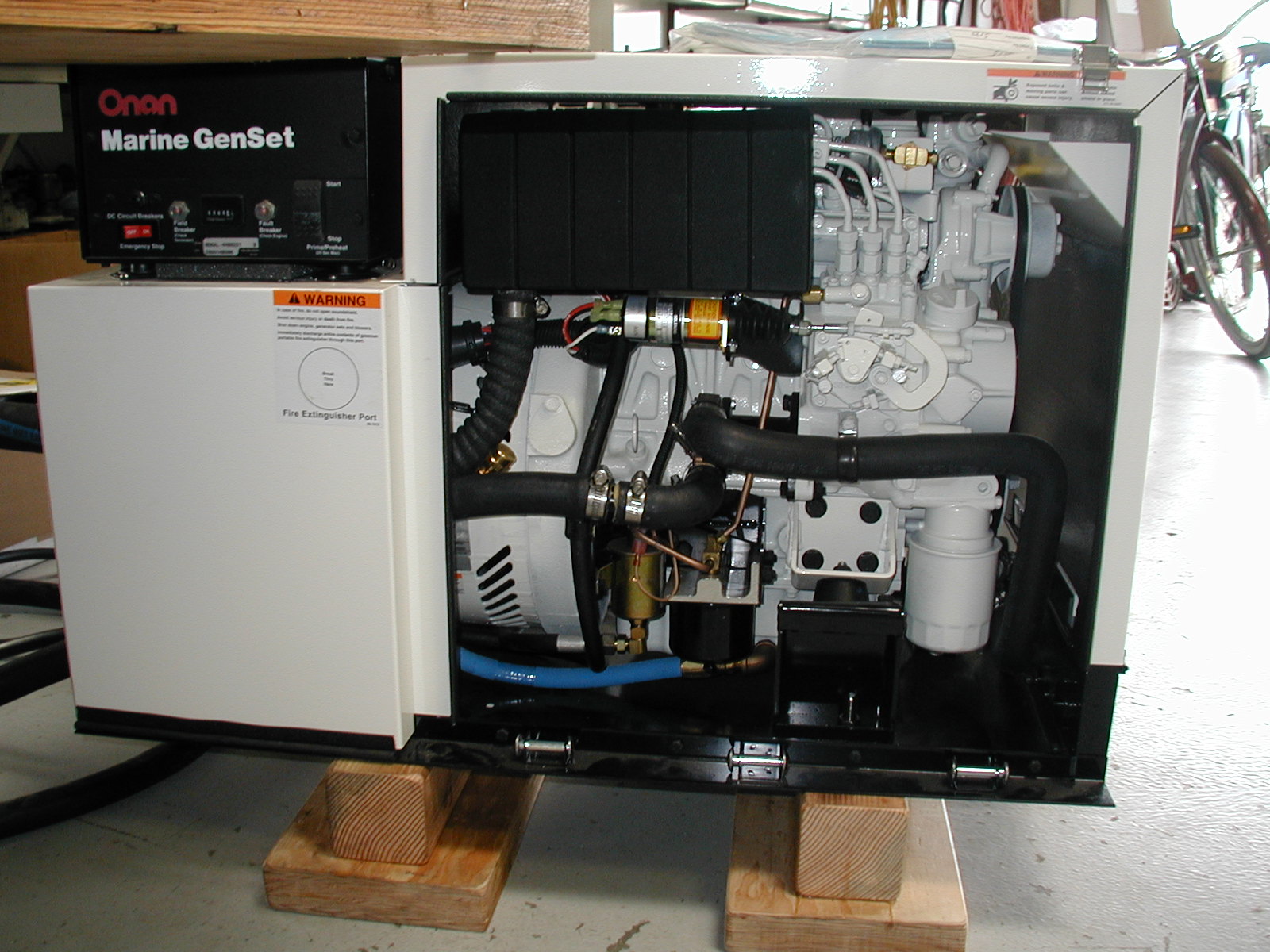 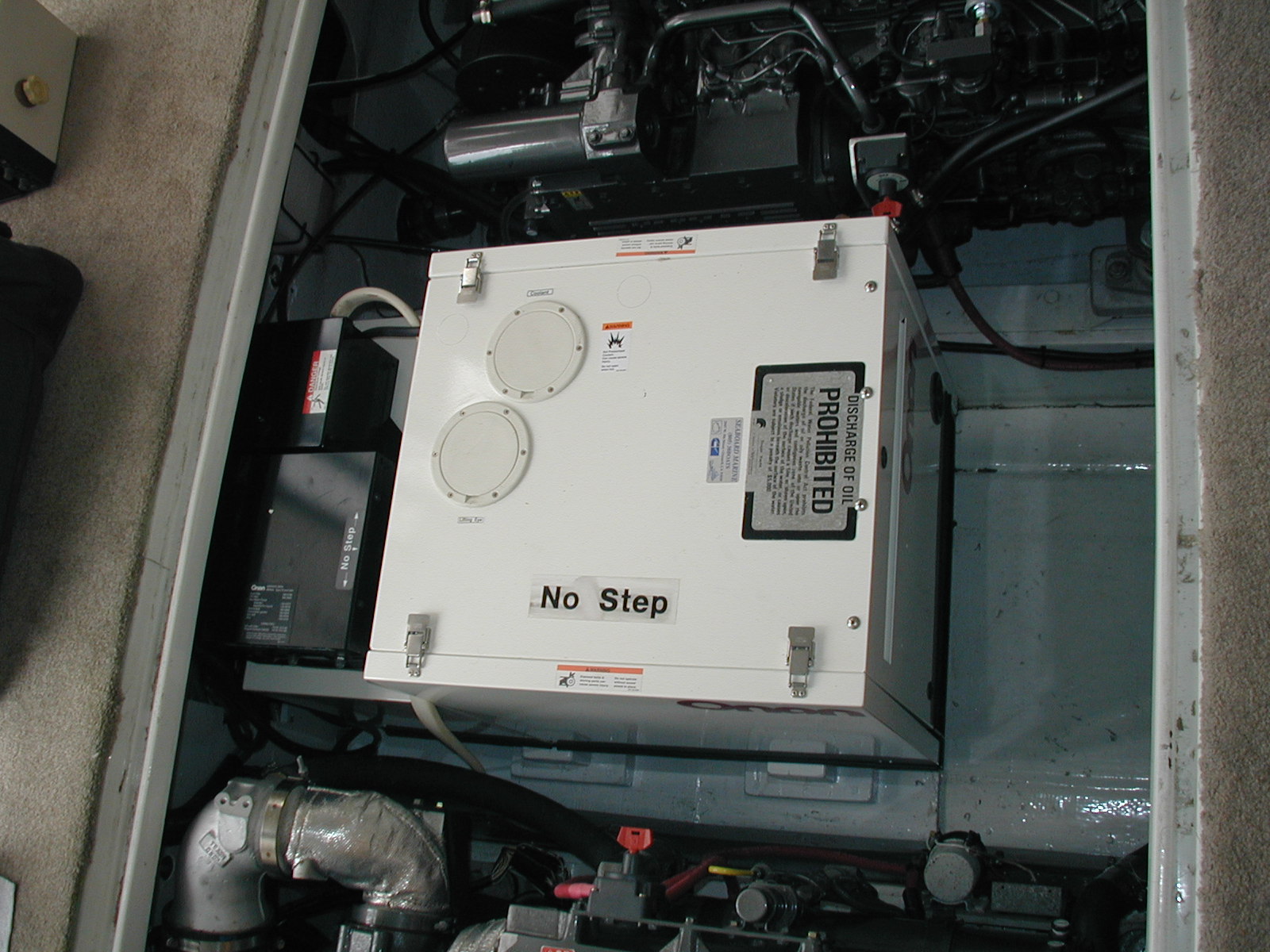 Generator – One of the last steps was the genset installation.

How did it all turn out? BOSSEA is now about 1000 lbs. lighter than before the repower due to the weight advantage of the Yanmar’s over the Detroits. About 40 hours are on the engines as of this writing. BOSSEA cruises very comfortably at 23-25 knots at 2800-2900 RPM. This is a huge difference from the old 16-17 knot cruise with the Detroits. Top end is now just over 30 knots at 3400+ RPM. Fuel consumption is right at one nm/gal. The engines are also noticeably quieter at cruising speeds. These are terrific results. 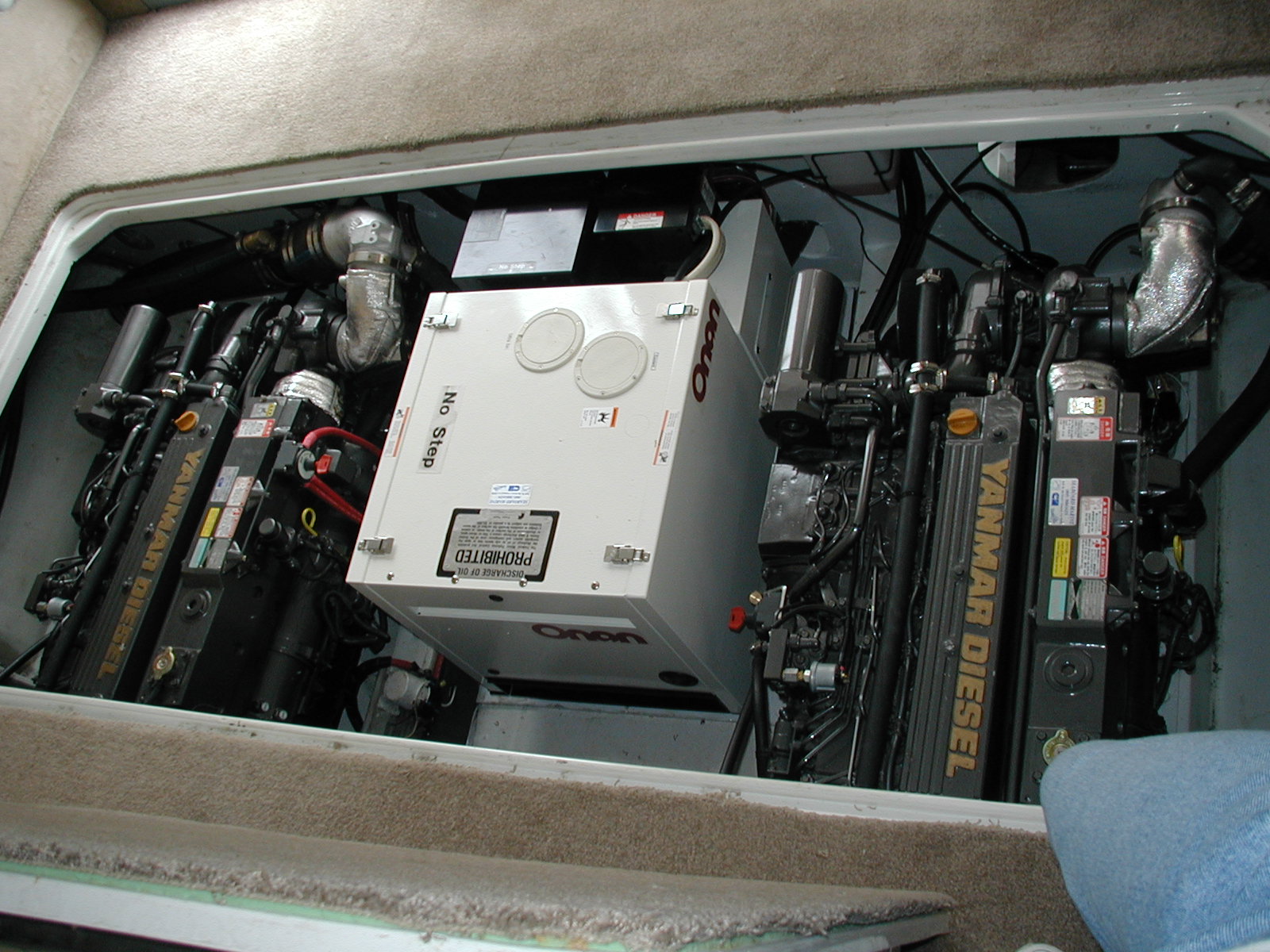 What could be done differently if it were to be done all over? One of the undesirable aspects of the Detroits was that they produced enough soot to noticeably darken the hull sides where the side exhaust exited the hull. The Yanmars are much cleaner, but the side exhausts still slightly darken the hull side. Rerouting the exhaust through the transom might have been a smart thing to do, and it still may get done someday. Another opportunity for improvement is based on the fact that the Trojan has a very torturous path to follow for wiring that goes between the engine compartment and the flybridge helm. Seaboard suggested that a new straight-line conduit from engine compartment to bridge could have been fabricated and installed that would have saved enormous amounts of installation time, and benefited any future work of similar nature. 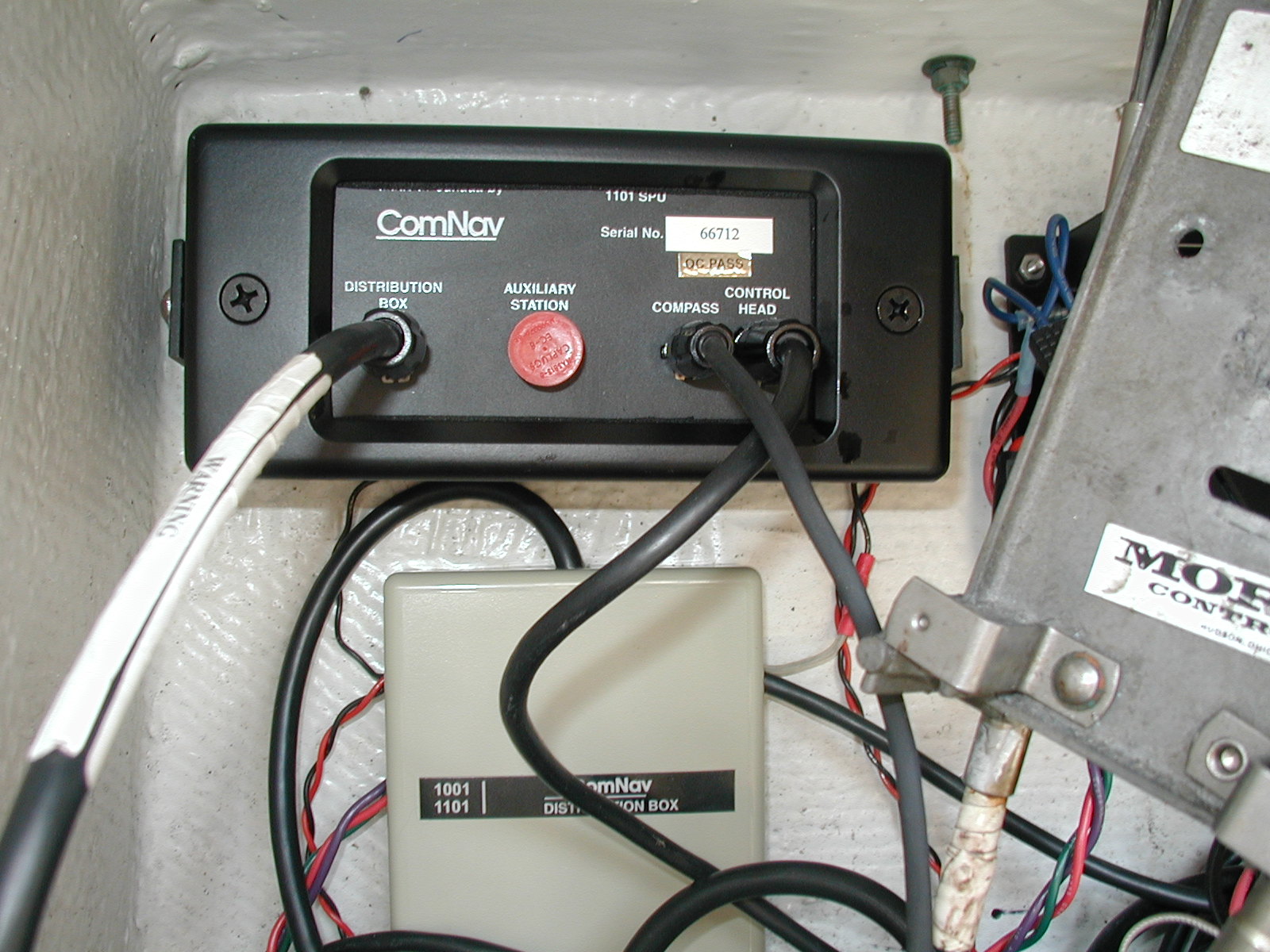 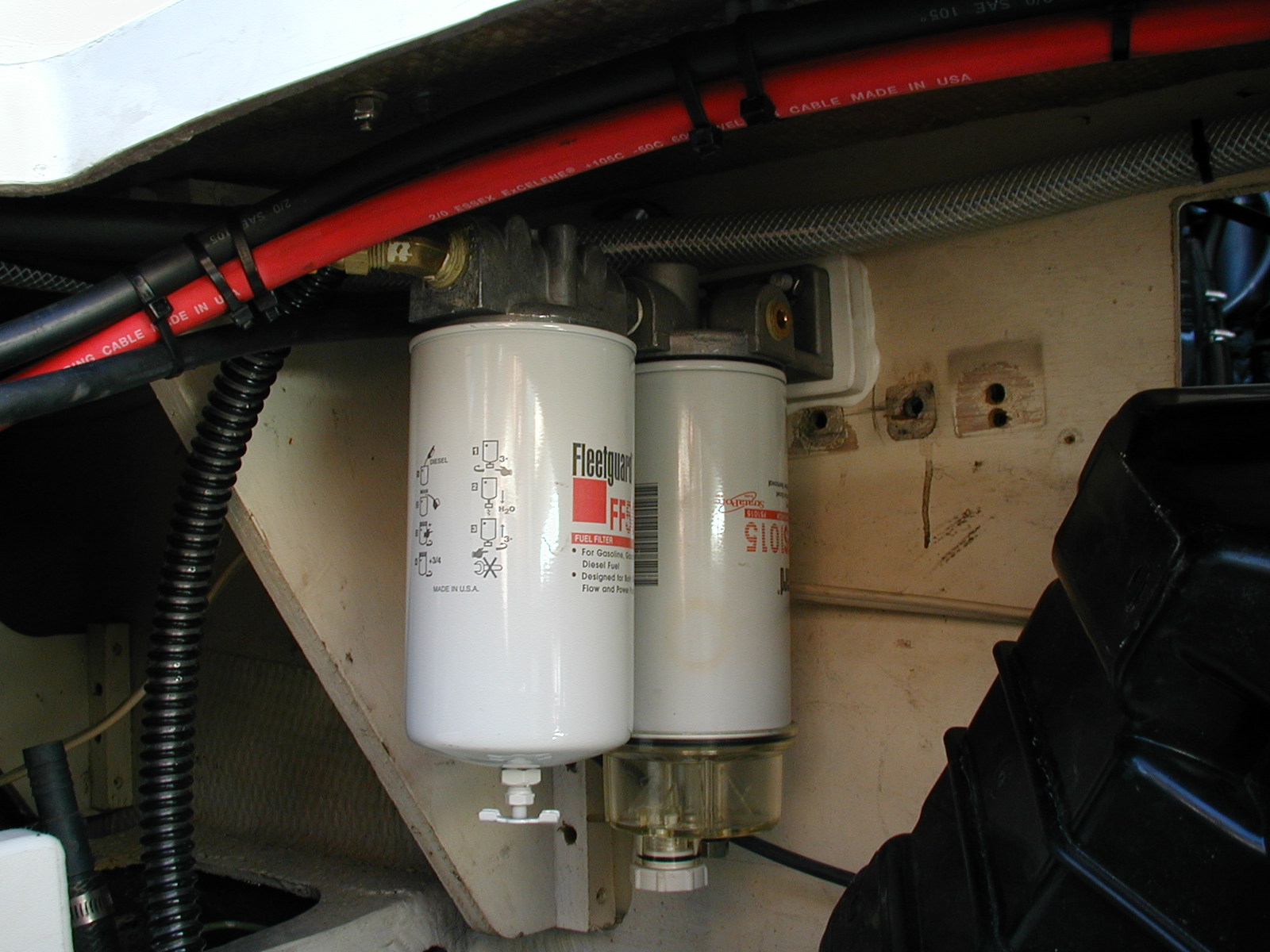 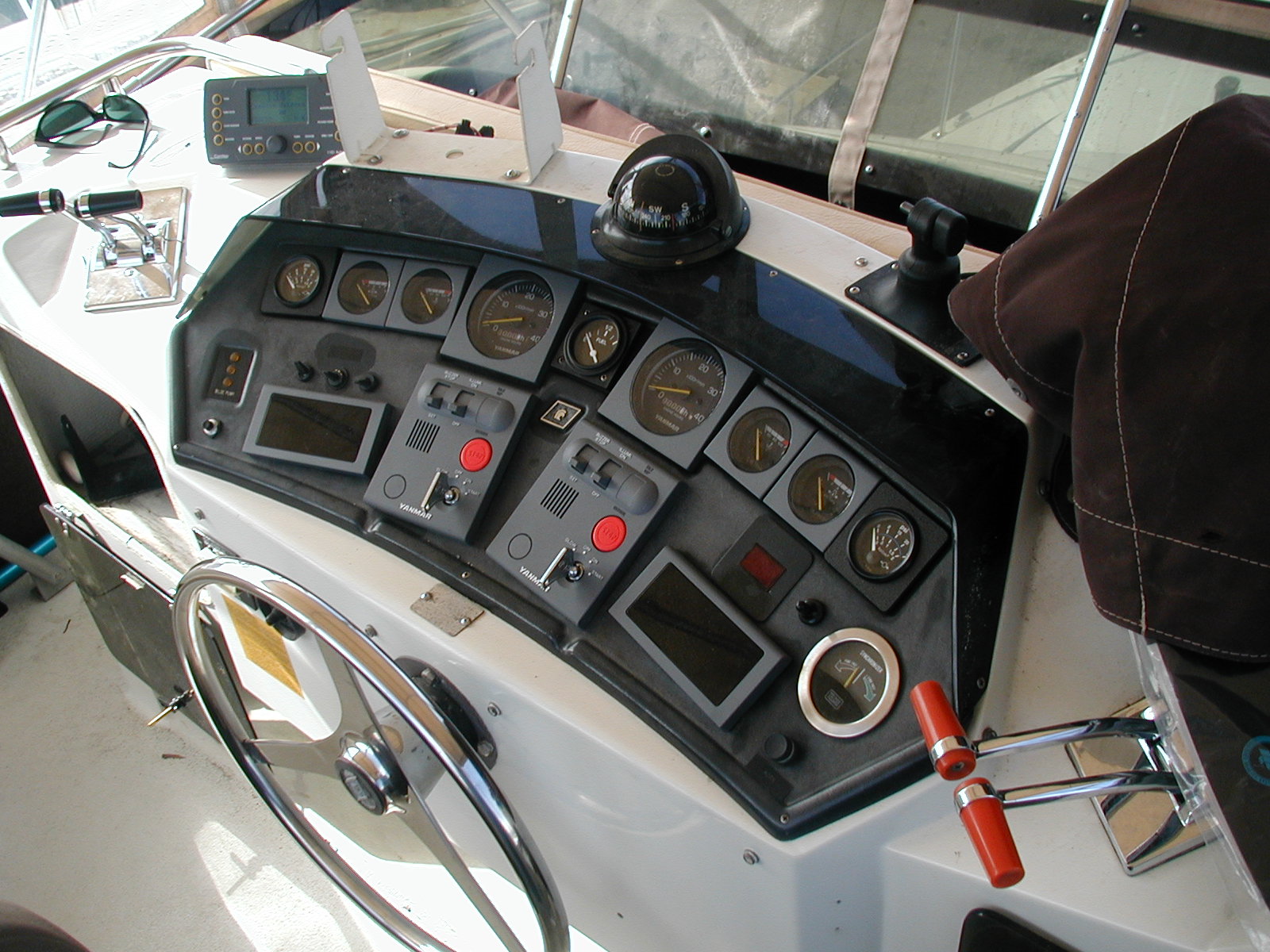 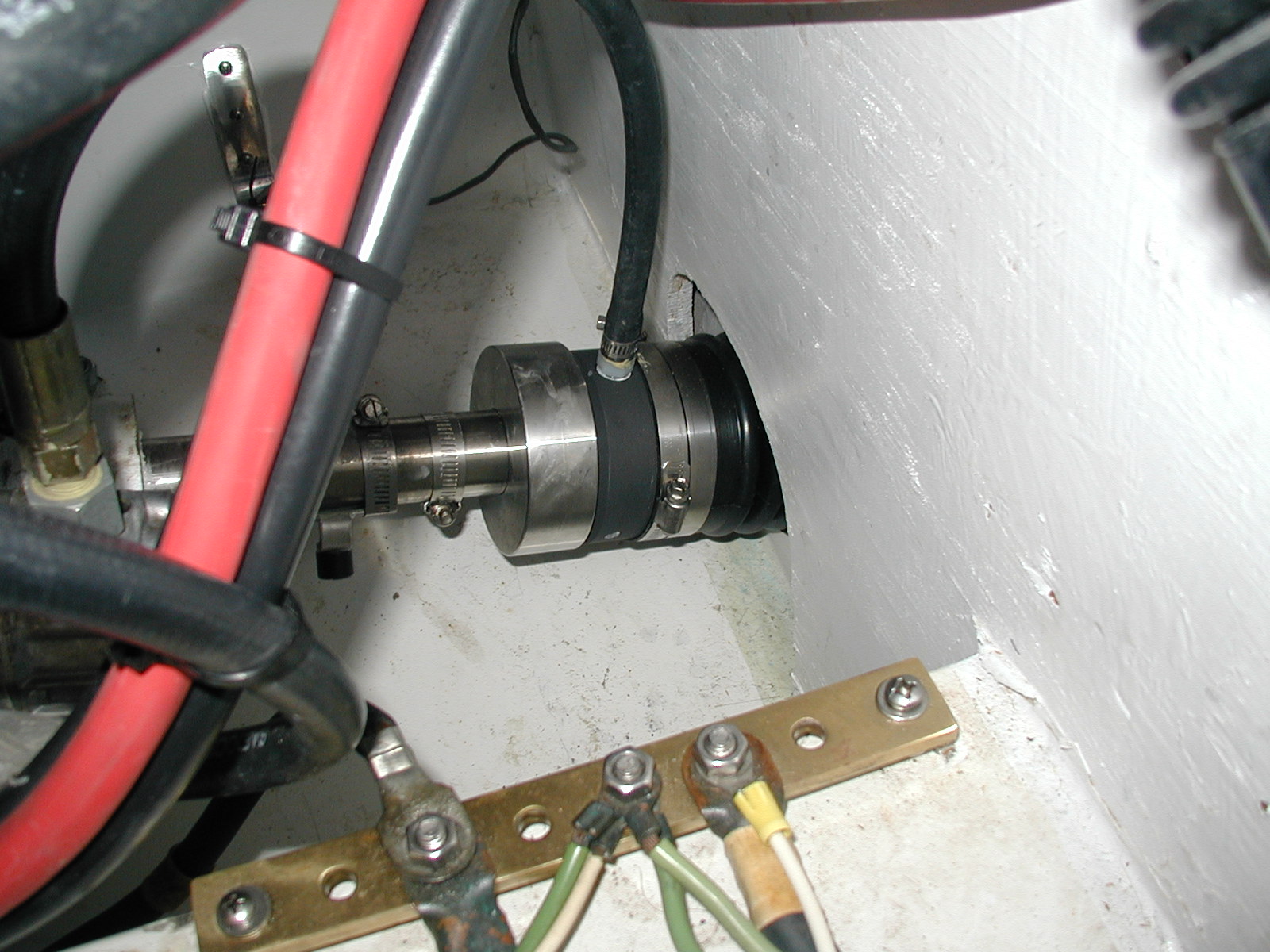 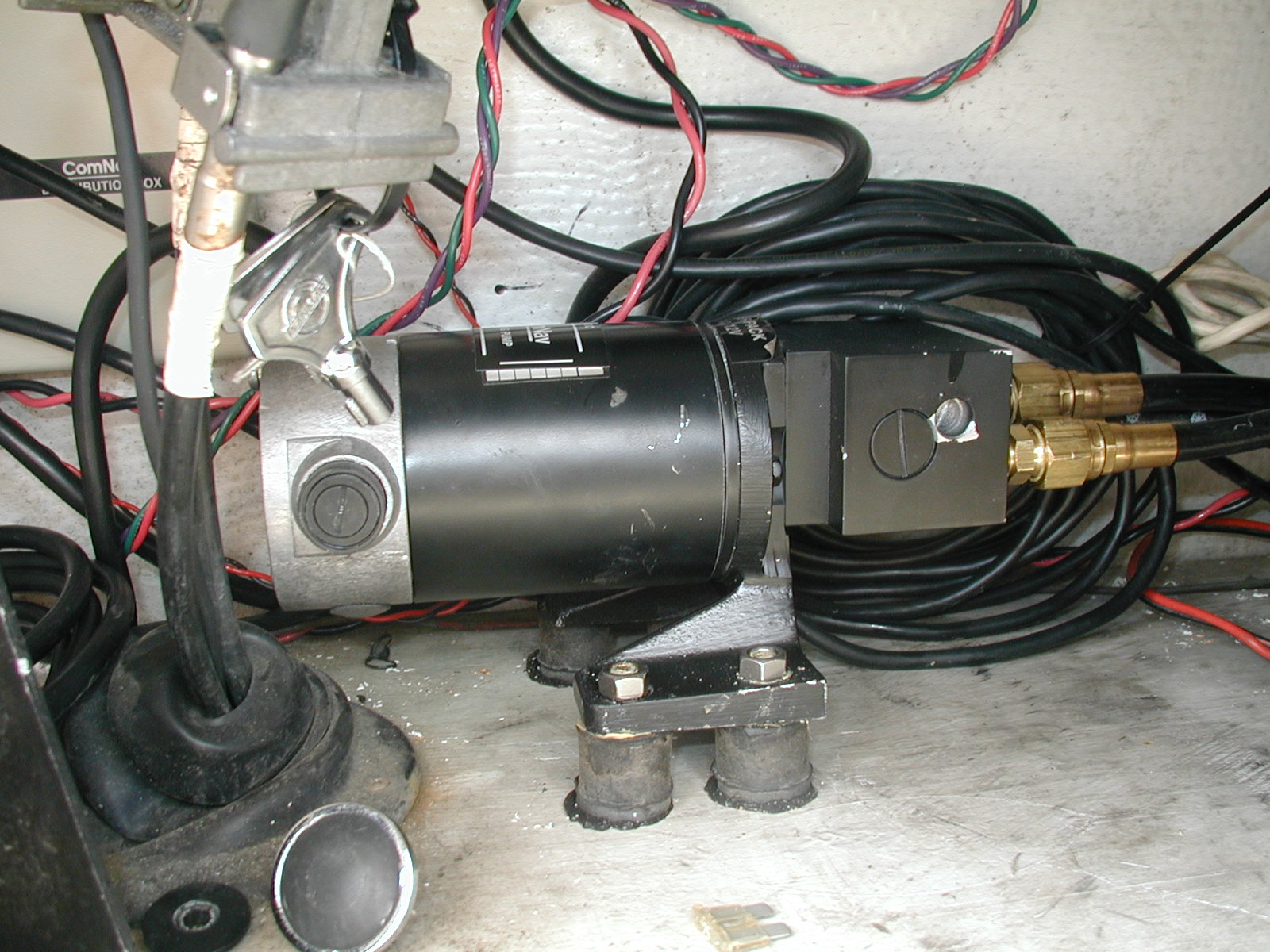 Was is all worth it? Definitely yes. The results of the repower are outstanding, and exceed expectations. It’s like getting a new boat for less than half the price. The total price of the repower was around $85,000, which is a significant investment. However, any attempt to purchase another boat in equivalent condition with equivalent power would have cost much more.

A testimonial on Seaboard Marine:

I can unhesitatingly recommend Seaboard Marine for repower work. They are willing to work in your favorite yard or in their yard. Their facility has the extra benefit of being fully equipped to fabricate just about any part needed to complete the job without undue delay. Tony Athens is extremely knowledgeable, and his crew of Frank and Bill are very talented and experienced. But more importantly, they’re dedicated to doing the job the “right” way, and don’t cut corners or do sloppy work. Since completing the job on BOSSEA, they’ve been very helpful in answering questions and fine tuning the installation. The on-going support they offer is great.