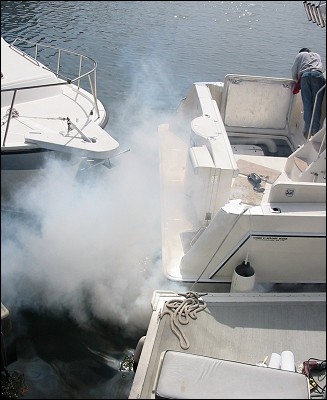 What is white smoke? What can we do about white smoke? Why does white smoke seem to be more of a problem now than it was fifteen years ago? Why is it that most of the popular marine diesels of today are all certified “IMO Compliant” or “EPA Certified” and still may have white smoke issues? These are tough questions to answer, although some of them can be answered with some science. But other times, some will still have “gray” answers, as the answer may or may not solve the problem.

White smoke occurs as a result of combustion temperature being so low that only partial combustion occurs and the partially burned fuel that exits the exhaust is in the form of a white vapory smoke. Technically, the white color is caused by the light-scattering characteristics of the re-condensed droplets of fuel (un-burned or partially burned) larger than one micron.

Many factors contribute to this unsociable condition and it can be one or more of the following:

Since this is a boat and marine diesel forum, and, white smoke seems to come with the territory, I’ll first start by giving you about twenty years of personal experience with white smoke.

Cummins released the 6BTA 250 around 1987 and this was an upgrade of the 6BT 210. Within a few months after the release of the 250, “white smoke” suddenly became a thorn in my side. The engine would start to suffer from slow start-up with one or two cylinders initially firing. Finally, after what seemed like an eternity (actually, about thirty seconds or so) all six cylinders would finally catch and the engine was running. Of course, during the first few minutes of running, the operator wished it wasn’t running, as clouds of white smoke would billow from the exhaust. This would last for five to ten minutes while idling out of the harbor and, just all of a sudden, it seemed to disappear and the engine would be fine for the remainder of his fishing trip. This would reoccur after 24-48 hour shut-down and the sequence of this obnoxious white smoke would slowly get worse over the next few hundred hours. The CAV pump that was used on the 210, which could last 10,000 hours or so, was now only lasting a hundred to 500 hours before excessive wear on the cam plate was sending metal particles throughout the injection system causing very poor injection properties which led to incomplete fuel burn.

The added fuel pressure for the higher HP rating was wearing out the pump way before its time. The reason the problem went away after five to ten minutes was that sufficient temperature within the engine itself allowed enough (complete) combustion to make the problem go away.

Obviously, the above scenario starts with item 6, “failed components.” But, as you can see, temperature comes into this as a “fix-all”. Since my initial experiences with white smoke in the late eighties, I can honestly say that I haven’t seen any direct failures of components that have led to any white smoke issues that always seemed to be a concern. Within the last few years, I’ve seen and been directly involved with white smoke concerns with Yanmar, Cummins, Ford, and Volvo engines. In none of these cases have I been able to ascertain exactly what has been causing the white smoke. But in all cases, the one remedy for all of these complaints is temperature.

So, why does Seaboard install block heaters?

Because white smoke can still be an issue with these modern “low-emission diesels”.

I consider this particular engine to be the flagship of the Cummins marine diesels offered today in this horsepower range. There is no doubt in my mind that within ten years, I will see many of these engines with 20,000+ hours on them and the heads will have never been off.

So why is white smoke still a problem? Temperature, plain and simple.

Of all the possible causes and, from my experience, the lack of temperature at which the fuel is burning within the engine is the single biggest cause of white smoke. So to me, the simple solution is to increase the temperature at start up. It doesn’t matter if the engine’s yellow, green,silver-gray, or white. They all can suffer the same, and YES, some individual engines are worse than others. The particular engine in a group that is having some very serious white smoke issues, such as the Yanmar 4LH in this thread, probably has some mechanical components that are not up to spec which may need to be fixed. In the meantime, the owner can mitigate this problem by adding temperature to the engine through a block/coolant heater, oil pan/pad heater, or an air heater. Just about every Yanmar 300 LP that I’ve come in contact w/ has the owner questioning the cold start-up. And yet this engine is a beauty in all other modes of operation.

On the new Cummins engines that I install, like the 350 C, white smoke at start-up can be of concern in many circumstance. These engines have ” state of the art” seawater after-cooling, piston cooling nozzles, and are optimized for full power output. The design limitations of a mechanical fuel injection system limit this “optimization” somewhat, although do offer some other advantages. These are the design features that make the engine fuel efficient, give it a longer life due to superior thermal control, and lower NOx levels to meet emission requirement. But these are the very reasons that, before the temperature comes up to a certain level, can cause an unacceptable level of “white smoke”.

You’ve got air feeding the engine that’s being cooled by seawater (after-cooler), you’ve got cold engine oil being sprayed at high volumes to the underside of the piston crown slowing it’s heating process, and you’ve got a mechanical fuel delivery system that is designed to be at optimum efficiency at WOT or close to it. Other than the fuel system, it’s the temperature again that is the common denominator.

Now, we can bring in the new full authority electronic diesels that can give complete control to the fuel system to allow only the most perfect balance of fuel- to-air ratios, fuel pressures, and timing sequences to overcome even the temperature problem.. Even w/ cold air, cold oil, or a cold engine, the engineers at Cummins, Detroit, Caterpillar, Volvo, etc., have been able to modify/control this fuel delivery in such a way that these “fly by wire” diesels have not only increased power and efficiency, they have solved the cold start-up smoke problem to where they will become the “engines of choice” within the next decade. But, increasing start-up temperature by adding block/pan heaters to these engines will still offer many benefits. You’ll still get improved start-up and oil circulation, less moisture build up in the engine room spaces, and a much nicer environment for the engine to live in (warm and cozy).

So, as you can see, white smoke is an issue with many of the engines today that are in perfect mechanical condition. The simplest and most effective way to control this is by using heat to solve the problem. Block and oil pad heaters are an inexpensive and sure solution to this reoccurring problem. I haven’t found a single engine yet that couldn’t benefit from a couple of hundred watts from Mr. Edison.