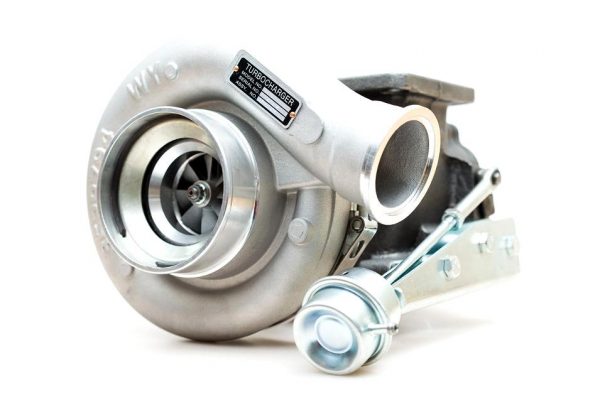 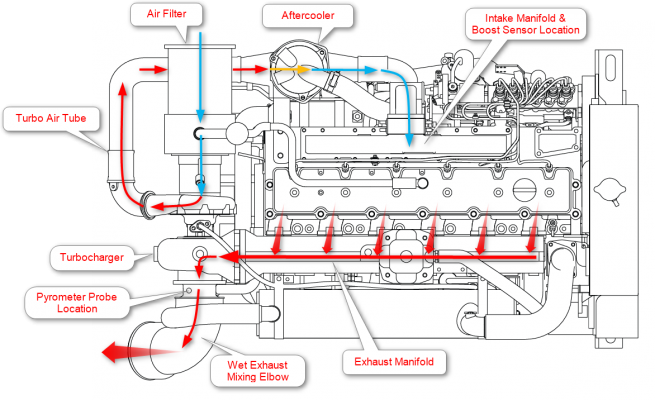 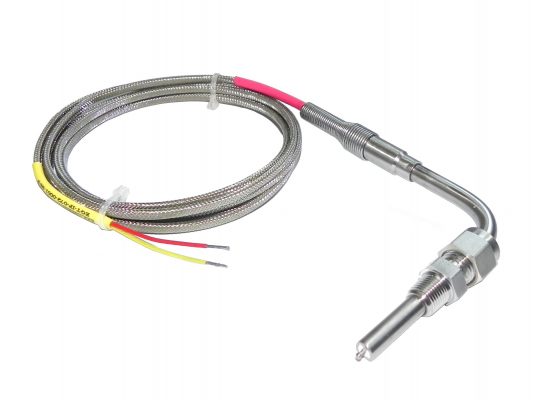 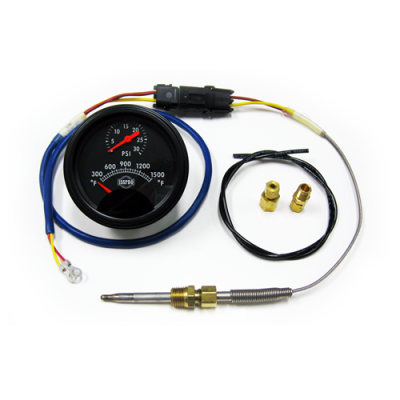 What are turbo boost and EGT, and what are their relationships and importance to the operation of a diesel engine in a boat?

Following is a brief summary of my ideas and some data that I’ve accumulated over the years relating to the above, along with the operation of a boat and these operating measurements:

The compressed air is forced from the turbo into the combustion chamber and may pass through an after-cooler/inner-cooler on its way to the chamber. The amount of boost or manifold pressure that is created is directly related to the amount of exhaust gases produced by the fuel’s combustion.

Diesel fuel requires tremendous quantities of oxygen to produce good combustion. Along with allowing the most efficient combustion, this large quantity of air is used to scavenge and cool (discussed below) all the components within the combustion part of the engine. Typically, in a modern turbo-charged diesel, air (oxygen) flow needs to be in excess 12,000 CFH (cubic feet per hour) per 100 horsepower produced. On a rough average, it requires approximately 5 gallons per hour to produce this 100 horsepower, which will equate to an exhaust flow of approximately 30,000+ CFH. This boost/manifold pressure/compressed air that is developed by the turbo is in direct relation to this exhaust flow, which is determined by the horsepower that is being produced, i.e., an engine running at no or very low load uses very small amounts of fuel and, therefore, has very low or no boost. A simple example would be removing an intake air hose from a modern Cummins engine and starting the engine. One would not notice any change in the start-up or idle characteristics of the engine, and even revving the engine up in neutral, there would be very little noticeable change in this type of operation. If the engine were then put into gear, as the throttle is advanced and more horsepower is asked of this engine (because of the prop loading,) a lack of combustion air would start to occur at about 1,000 rpm and black smoke would start to become quite noticeable (no boost.)

Since all boats have varying characteristics relating to the way the engine is loaded during operation, manufacturers do not publish boost curves in relation to horsepower and rpm. What they do publish is maximum boost at RATED HP and RPM.. This is why installing a boost gauge early in the operation of a new vessel will allow the individual operator to develop base line numbers for the particular boat. A typical planing hull boat, heavily loaded and transitioning from hull speeds to planing speeds, may indeed go through a speed range that requires substantially higher horsepower/boost than is needed to maintain the boat at a planing speed above this transition speed. There are many boats/engine combinations that would dictate the continued operation during this step-off mode be avoided as the engine is actually in an “overload” condition.

As the years have gone by, my experience with Cummins B and C marine engines has shown that the engineers have developed the turbo-charging technology to where boost pressures rise much earlier in the rpm/ power range without over-boosting at rated horsepower. In some engines, a “waste-gate” is used to keep maximum turbo-boost at acceptable levels. A waste-gate is merely a pressure-operated valve on the exhaust side of the turbo, which bypasses exhaust flow to control turbine speed/boost. These better designed “turbo maps” compensate for some of the unusual operating characteristics in a boat by allowing a much more controlled air flow through the different loading variables in different boats.

Exhaust gas temperature is merely the temperature of the exhaust gases coming out of an internal combustion engine.. They are typically measured at the outlet port of the exhaust and temp probes can be placed before or after the turbo. When placed before the turbo, readings will be much higher and the reading will also show a much quicker change when a load-change occurs. The turbo extracts much of the exhaust energy (heat) and this results in this measurement difference. As I’m most familiar w/ the Cummins B’s and C’s, and the factory only publishes EGT #’s for measurements taken AFTER the turbo, I can only comment on factory #’s interpolated w/ field testing of over a hundred boats over the past 15 yrs or so.

EGT is also affected by engine load like “boost” but has a few other characteristics that make it an extremely important monitoring device for the operator who wants to use ALL of the HP he paid for, but also wants to be sure that his operation does not go “over the edge”. Besides being affected by engine load, it is a gage that will tell you that your turbo is putting out enough boost to have efficient combustion and keep the operating temperatures within the engine from exceeding a safe limit. (Please understand that coolant temperatures do not affect combustion temperatures.) Some earlier Cummins B’s & C’s engines did not generate enough boost at mid-range/high load conditions and EGT could rise well above 1000 F in RPM ranges around 1800-2100, thus shortening the life of some components. This is where boost and cooling come into play. Higher boost at these lower RPMs not only allows more HP to be produced, it keeps EGT at a safe limit. Boost (higher boost) is a GOOD thing.

Now, imagine your new boat with twin high performance 300 HP turbo charged after-cooled diesels, and you are ready to start using the boat for its intended purpose. You know from the sea trials that everything seemed to run perfect, you’ve got the standard factory instrumentation and now you’d like to outfit the boat with all the goodies you have dreamed about.. During sea trials the boat hit 30 k’s with your buddy and the yacht broker on board, had a ¾ full fuel tank and the engine went right to its rated RPM (3600) with a little extra.. Now comes the “wake-up” call.

It’s been 3 weeks now and during this time you’ve added 1000 lbs of high dollar gingerbread, got your fuel and water tanks full, and you are loaded for bear (you not only have your 6 yrs accumulation of fishing tackle on board, your friends that are helping to pay the fuel bill have theirs too. This is when you need to have those other monitoring gages (a PYRO and BOOST gage) ready to go, as now it’s time to start developing those base line numbers we’ve been talking about.

During sea trial, the boat seemed quite spunky. Although she is still performing well, instead of topping out at 30 k’s, with an easy cruise at 23, she only hits 27 now at barely 3600 RPM and cruises nicely at 20. Had you had a boost gauge and pyro during the sea trials, you may have seen 34lbs of boost at 3650 with an EGT of 900 F. Cruising at 3,100 rpm (23 k’s) the boost was only registering 14lbs (light engine load.) Now, with all the extra weight and a three-week old bottom, your 3,100 rpm cruise is only getting you 18½ k’s, so now you need 3225 rpm to a comfortable 20 k cruise. Your boost now is 21lbs and your EGT is still reasonable at 825 F. Now, what can we do over the next few months with these types of numbers and how can they help us monitor the performance of our engine and be sure that we are not exceeding acceptable operating conditions?

As engine hours increase, air cleaners become dirtier, turbo blades and turbine housings become fouled, and hoses, tubes, and aftercoolers get oily. All of these conditions will contribute to lower boost pressures and higher EGT’s at any given rpm/load. As time passes, boats seem to become heavier for a variety of reasons while bottoms and props definitely get dirtier. These two conditions lead to higher loading at any given prop rpm as the boat moves slower at the same rpm. These last two conditions lead to higher loads at the same rpm and will translate into higher EGT’s in relation to previous boost pressures that were noted when the bottom was cleaner and the boat was lighter.

If a “turbo hose” develops a leak over time due to a defective clamp or chafing, the resulting air leak will show up as a rise in EGT with a decrease in boost. I’ve actually been on a couple of sea trials where a turbo pipe/hose would blow off at high speeds and besides the instantaneous sound of an explosion, black smoke would pour out of the exhaust before the operator could pull back the throttle. No boost. 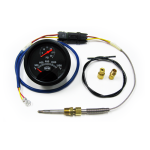 SMX Marinized 300-1500°F Turbocator Gauge KitThat pyrometer gage (pyro) you installed will tell you when something is wrong probably better than any other gage you could have if you want to know when your engine is going to self destruct from being over loaded. That boost gage will be the guide to engine load for your boat and will tell you if you are getting the HP you paid for, along with establishing various engine loads throughout the rpm range.

Are these added gages for every application?? That’s a personal choice, but with the high performance diesels that drive this market and are producing upwards of 1 HP/ cubic inch, (along with many of the operators of these engines asking them to produce in excess of 75% of their maximum power when “just cruising around”,) I’d say one would be driving blind (without them) w/ a $50,000 plus engine room pushing his boat and operating his engines “close to the edge”