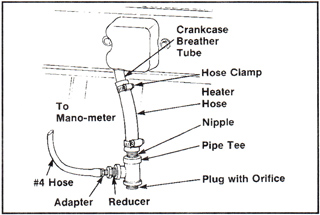 Blow by is generally recorded in liters per minute, but a water manometer may be used to measure blow by from the breather tube after fabricating the following adaptation:

The engine test is a combination of an engine run-in and a performance check. The engine run-in procedure provides an operating period that allows the engine parts to achieve a final finish and fit. The performance check provides an opportunity to perform final adjustments needed to optimize tho engine performance. An engine test can be performed using either an engine dynamometer or a chassis dynamometer, If a dynamometer is not available, an engine test must be performed in a manner that simulates a dynamometer test.
Check the dynamometer before beginning the test. The dynamometer must have the capability to test the performance of the engine when the engine is operating at the maximum RPM and horsepower range (full power).
The engine crankcase pressure, often referred to as engine blowby, is an important factor that indicates when the piston rings have achieved the correct finish and fit. Rapid changes of blowby or values that exceed specifications more than 50 percent indicate that something is wrong. The engine test must be discontinued until the cause has been determined and corrected.

Maintain the following limits during a chassis dynamometer test:

NOTE: Due to variations in ratings of different engine models, refer to the specific engine data sheet for the particular engine model being tested.