Choosing the correct thermostat for your Cummins Marine 6BTA can sometimes be a tricky process… And although the Cummins factory has been supplying all B5.9 Marine engines with 180F stats since their introduction in 1985, IMO, as the 5.9 increased its POWER DENSITY from a 210 HP (roughly 35 HP per piston) engine to a 355HP engine (i.e. the “370 Diamond” at 60 HP per piston), IMO the engineers went to sleep as to what could and was happening in the field with these engines.

Although these same engineers did upgrade many parts of the cooling system over these 2 decades, I do not think they realized exactly what can happen in real life conditions in a Marine Environment, especially on planing boats————–I think they only thought about a Motor Home or Dodge ¾ ton truck with a horse trailer on the back cruising down the freeway at 60-70 MPH with the 5.9 under the hood… all while using under 4-6 GPH for hours on end (maybe 15HP per piston hauling that Horse trailer).

The problem is, in any planing hull I have seen these engines in, it goes like this…….It’s typically 8-13 GPH per engine when on plane in every single engine or twin engine boat that I have ever sea trialed, with 10-ish GPH seen as an average in the usual vessels that these engines are installed in. And In case you don’t already know, the GPH your engine is consuming is a 100% direct relationship to the power you are extracting from the engine.This is a very simple grade school equation—–More HP = More HEAT, and that is truly, “plain and simple”—– Making sense yet as to where this is going?

So, now you have an engine with components on it that the coolant system must extract major amounts of heat from that are not the same as in your Dodge truck… Namely, the exhaust manifold, the turbo charger, and the aftercooler. In your Dodge, all of these components are “AIR COOLED” and all that heat that must be “rejected” (absorbed) and is pushed out of the hood into the surrounding “unlimited stream of air” flowing past the truck.

Now, let’s move into a “Marine Engine Room”……How about close to zero air movement other than what the engine consumes…Now add 200%++ HP being made by the engine (about 60HP per piston at WOT or about 30-40 HP per piston at cruise) for hours on end going from point A to Point B. Next, add components to the engine that must be kept at “coolant temps” or they are subject to failure (cracking, gasket failure, etc). In real terms, the exhaust manifold and turbo in your Dodge glowing RED is normal when climbing up a hill for 10 minutes. \

So now we have it ………..YOU, as the operator of the engine running at these loads, needs ROOM to “throttle down” when any one of a have dozen things can go wrong… The marine B is a really great engine whether operated in a Trawler at 2-6 GPH when cruising for days on end, or in a planing hull using 160-200 HP (27-34 HP per piston) when cruising for long distances……..But you need to “understand the difference” and that is why we developed the 160F hi-flow thermostat for this engine.

The Cummins Marine 5.9 engines are not very tolerant of overheats. In fact, it is very easy to not catch a rise in temperature and literally “cook” the engine. Other components like the turbo, exhaust manifold, also give up their life very quickly when exposed to higher temperatures over 200F for long periods. The 160F thermostat gives you that extra margin of safety to better catch an overheat condition.

The Safety thing only gets better when you want to take this a step further with a redundant alarm system. The 180F thermostat engines with the unreliable and barely audible Cummins OEM circuit board alarm system trigger the alarm at 205F. In most situations damage is done at that point depending on why it was triggered (loss of coolant or loss of raw water flow), how quickly that alarm switch is actually triggered and whether or not the operator hears it and how quickly he reacts to it.

When running the 160F tstat you can have your redundant a.k.a “sleepyhead” alarm system triggered by a 190F switch.  Therefore, your alarm is alerting the operator that something is amiss while the engine is still in a safe temperature range before irreversible damage is done. 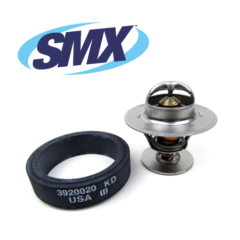 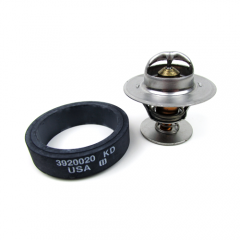